Some new details about Alas Mortis. Mainly about what to expect with the game, and we even talk about one of the revealed human characters.

Hey guys, welcome to another news update for Alas Mortis. For this update I'll mainly talk more about the game, and what you'll be able to expect when the game releases for FREE. Yes, I'm still planning on releasing Alas Mortis completely free to play when it's ready for early access stages, and then see if there would be any interest in Skin-Packs people could buy for a very, small price. Nothing more than $1. 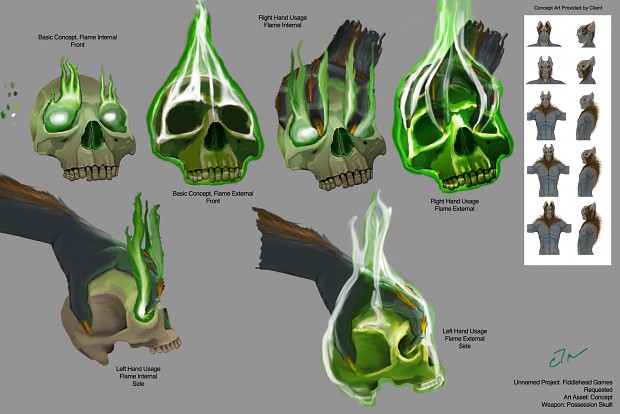 Here we have Cerebrum, one of the weapons that the Demon will be using in-game. The skull is mainly going to be used in the Possession game-mode which I'll explain in a tiny bit. Cerebrum is a skull, wreathed in green flames and can be used in the traditional "survival" mode which will be the core mode, and will come with the early access. The Demon player can throw this skull at his enemies and engulf them in flames, which will kill them momentarily. However, if an engulfed player bumps into another player, they will catch fire too and would have a chance of causing a chain-reaction which could be fairly...bad. The skull however could only be used once per-round, and after it's initial use it would be gone from the rest of the match.

Possession Mode will also utilize the skull, but in a different way. Instead of igniting the human players, the skull will instead possess one human player, and turn them into "The Possessed" which is essentially a human being controlled by the entity trapped within the skull. The skull will then have a cool-down until the Possessed either dies, or "exorcizes" themselves. Once possessed the player has 30 seconds to kill one of the human players, or they'll die. If a Possessed kills a normal human player, they'll essentially exorcize themselves and be free to live again, and survive against the Demon. Either way, someone dies if the skull hits someone. However, this mode is heavily subject to change at this point. We'll see what happens when this mode is available for testing, and how the community/player-base react to it. 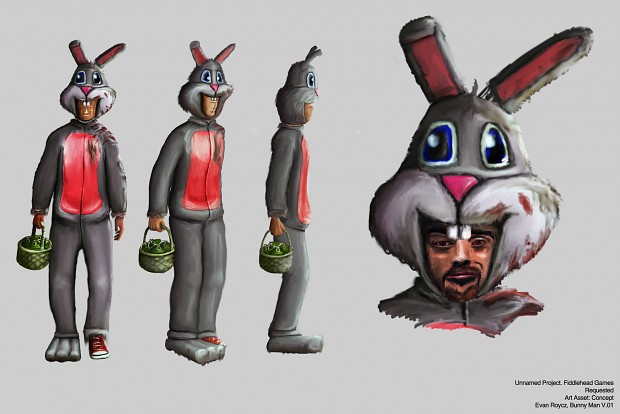 Here's one of the playable human characters, Evan Roycz. Evan is a tad-psychotic, and had committed an atrocious deed in the past, that he was never convicted of and that's why the Demon is hunting him down. This then explains why the Demon is hunting down this group of people. They've all committed something that is perceived as "sin" and the Demon is essentially killing them, and taking their souls to Hell. You may be wondering why he's dressed in a rabbit costume, and that's for a variety of reasons. The first being he's kind of an "homage" to Robbie The Rabbit in Silent Hill, and the other being his job is to dress up like the "Easter Bunny" for birthday parties. Evan is quite possibly my favorite character of this game, and I can't wait to see how people feel about him when the game launches, and hopefully he makes them uncomfortable. I even have a voice-actor lined up already that I'm really excited to share with you all when the time comes.

There will be a variety of playable characters at the get-go and I'd like to introduce more via Skin-Packs. Similar to what Killing Floor does with the new characters they release.
---
Even though this is a small update, I still hope people are interested in the game, and will continue to follow the development of this project. If you'd like to help out with the game please PM Manio31 here on IndieDB. Thank you!