Making boarding crew smarter and moving towards the dev7 release. Plus: a new heraldic charge.

As the final major change in dev 7, I've been working on upgrading sailors' ability to move around outside ships.

So far, marines and grenadiers could jump or grappling-hook between ships, but if they ended up on the ground or on a floating rock, they were lost. They'd literally just stand in place, vibrating gently, unable to move.

This is fixed now: they can move between various places at will. Code-wise, this involved creating a new abstraction over ships and land formations. The code for them is different, but they are both physical objects organized in a grid. This meant that I was able to improve the code used for moving across ships to also work for bits of land. Crew can now jump from one rock to the next, or walk across the ground to enter a building, and similar things.

But just being able to move from one place to the next wasn't quite enough. For example, moving from one building to the next means first exiting the original building, walking across the ground, and then entering the new one. Or perhaps boarding an enemy ship requires a fearless leap over to a floating rock followed by a drop onto the enemy ship. Finding paths within grid-objects isn't enough, they also need to find paths between them.

So now, crew can evaluate grid-objects (ships, buildings floating rocks, the ground itself) for whether one is reachable from the other, and create complex multi-jump paths. 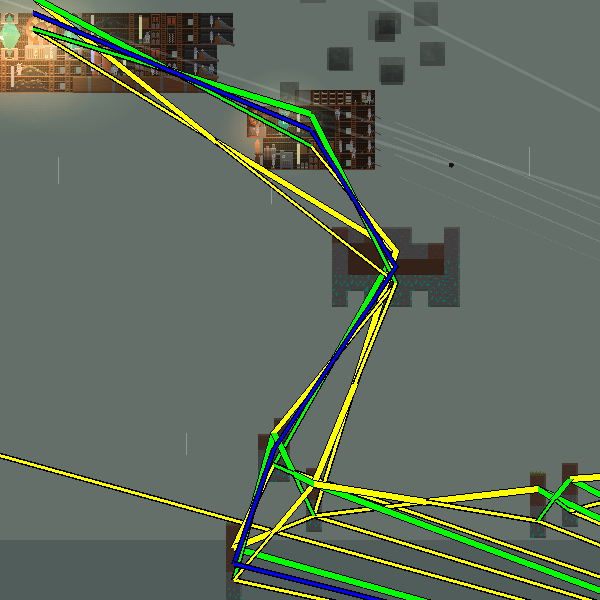 Explanation: Links taper in the direction of travel. Green links can be done with jumps, yellow links require grappling hooks. The blue path connects the ship at the top left to the ground through a sequence of green links.

What does this mean in practice? You can now tell marines and grenadiers stuck on the ground to go board another ship or building, or rejoin one of your ships. You can tell your crew to abandon ship and reinforce some other craft. You can also select the ground and floating rocks and issue orders to crew members there. 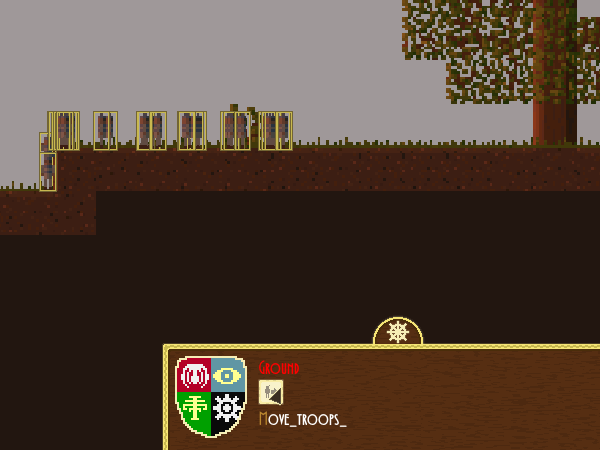 This also lays the foundation for new kinds of enemy in dev8. Giant spiders that come to eat your crew will run using the same code. I'm sure you're very happy to hear that.

Finally, as promised, here is the second new heraldic charge:

What remains to be done? Bug fixes, mostly. Translations. Trying to catch new bugs I introduced. Dev 7 will be out shortly and the final charge will be revealed.

Thats great!
There will be some control over what your soldiers have like weapons, armor or how experienced they are?

In the sense that you can choose between guards, marines and air grenadiers. I haven't planned any in-depth customization features for soldiers. Once again one of those cool things I don't want to put into the dev plan because it will make the game take even longer to complete.