This week, we'll talk about Sprouty. No the game itself but the small character wrigling when you press buttons. The main point of this ar ticle is about chara design. Why Sprouty looks like Sprouty!

The base idea was to have a plant looking like Bulbasaur (yeah, the pokemon, we love pokemons). But we had to create a unique character, not just make a copy of a famous one. So how should he look?

Our hero dreams of adventures, glory, treasures... That's common thoughts of youngsters, so Sprouty should be young. That doesn't really help finding his look at first. What best represent youth for a vegetable? A seed! Here we go Sprouty, you will be a seed.

The tree idea was the most revelant concept (even if the game designer is still weird). So we have trees spreading themselves by dropping moving seeds during the night.

In the prototype, the world of Sprouty is composed by floating islands. We can imagine that in this sky world, winds are very strong and the trees evolved to resist this rude environment. Phew! Luckily, we're in a marvelous world. According to this "evolution" of trees, we could take some liberties on how to design them, and also the entire world as well. Our trees have a specific design with leaves growing on the trunk, and some other leaves growing as rings around the trunk. Look by yourself : 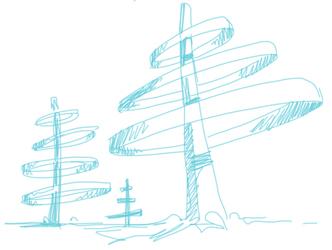 With this cool design, they can resist to the wind. No scientific studies on aerodynamics here, just... fun!

Sprouty is young, but will grow up to become a strong tree. He can still move around by himself after the day ends, but not forever. This part of his story is simply shown by a small growing tree on his head.

And voilà! You know more about Sprouty and why he looks like that :