In which several videos for A Door to the Mists are made or worked on; all of these have a (largely) common end-screen; the approach to autosaves is reconsidered; quitting-saves are split from autosaves; a number of bug-fixes and touch-ups are made; the "Wandering Visual Novel" project gets an "environment building" tile-editor-and-gameplay video; and Night River gets some Let's Plays!

This week's screenshot is a still from another new trailer that I've been working on: 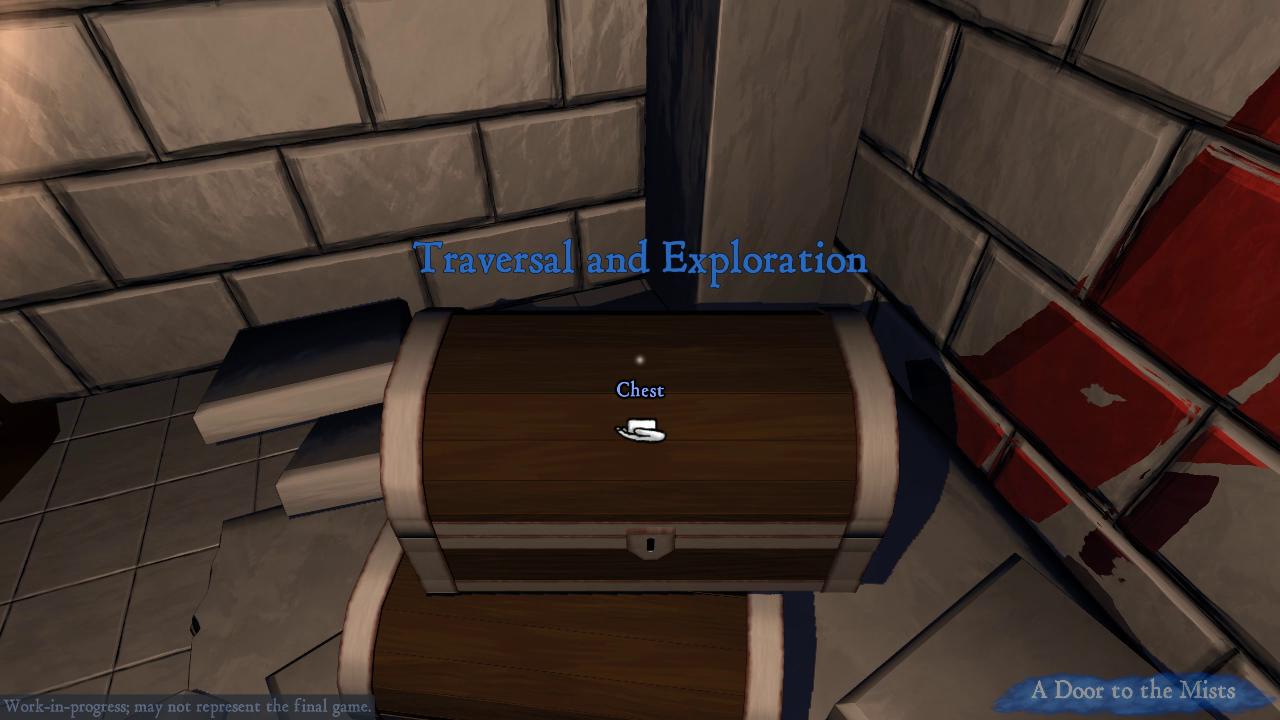 The week just past was largely focussed on the making of videos, although some other things got done, too:

Simplest of the videos, perhaps, is the one that shows the game's main menu, complete with the royalty-free music that I've selected for it. (If you want to know the source of that music, you should find it linked in the description of the video.)

That video has been uploaded for viewing, and should be available below:

I have previously uploaded a video of the intro/story cutscene. But since that time the cutscene has seen some changes, most saliently to its music. (And indeed, I even made a change while working on this new video: I added a slow zoom to part of the first scene, hopefully making it a little less static!) Thus, the previous video is no longer accurate.

Rather less simple is a new gameplay video that I've been working on. It occurred to me, as I recall, that I haven't shown much of the core gameplay of A Door to the Mists for quite some time. This new video then serves to rectify that.

It consists of short snippets of the fundamental elements of the gameplay in A Door to the Mists: traversal and exploration; puzzle-solving; and combat. (It is thus a little bit spoilery in places, but ah well.) Furthermore, the gameplay is shown with no overlaid music; instead, it simply includes the sounds of the game itself.

Those last two videos are, I think, pretty much complete. However, I haven't yet uploaded either of them: I'm largely waiting until I have a release date for the demo, so that I can include it in their text and so that I can release them in the approach to that release date.

And last of the trailer-work from the week just past, I've begun work towards a new main trailer. This is still quite nascent, and is proving tricky. For one thing, I don't want to simply re-make the previously-released "early trailer", even granted that I now have footage from level two to include. Still, I think that I have some ideas, or at least the start of them; we'll see how it goes!

All of these trailers share a (largely) common end-screen. As in at least one previous trailer (I think), this shows the game's title against an animated backdrop of mist.

But it now also includes the game's tagline ("Adventure is my path"), and a short one-sentence description ("Traversal, Puzzles, and Combat in a Heroic-Fantasy Setting"). In addition, in gives my Twitter handle and the game's IndieDB URL, and--for the unreleased trailers, at least--I intend that it include a mention of the release-date for the demo.

(Only two trailers have slight differences in their end-screens, as far as I recall: The "main menu" video, shown above, doesn't mention the demo-release; and the "mood" trailer mentioned in last week's post uses different music.) 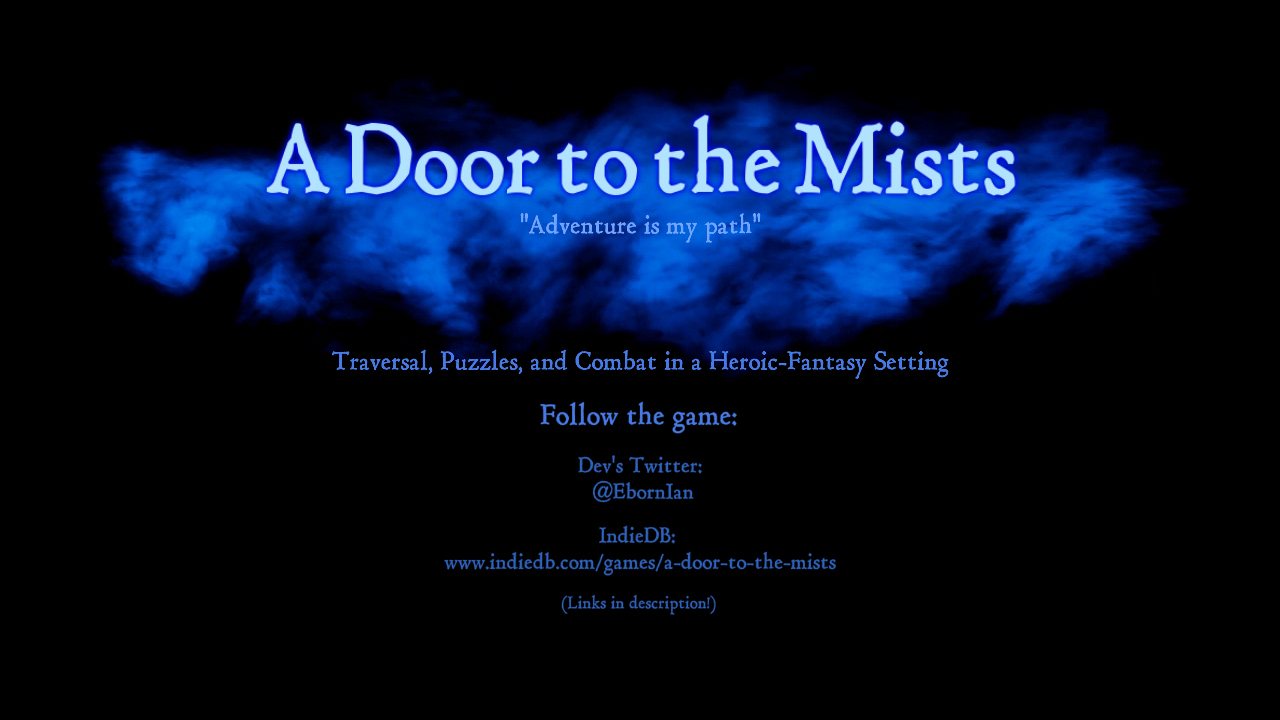 On the technical side, I've been thinking a bit about my autosaves.

As things stand, the game keeps only one autosave file--each autosave overwrites its predecessor (if any). But what if the autosave file becomes corrupted? The player does have the ability to save manually, and to make a quick-save (which similarly overwrites any previous quick-save). But if they haven't been doing so, then a lack of other saves could well leave them with no recourse but to restart the game entirely...

I considered having the game alternate between two autosave files. This seems like a decent idea--but might come with complications, and I'm loath to implement it so close to demo-release.

I also considered having autosaves no longer overwrite their predecessors, simply accumulating over time. My save-files aren't too big, I think, and hard-disk space isn't as limited as once it was. But nevertheless, given that I want to be fairly generous with autosave-points, that could result in creating quite a lot of files, and quite a few save-slots in the game's save/load menu...

I haven't yet quite settled on what to do.

All that said, I have made one change: the save-file that's automatically made when the game is closed is now separate from other auto-saves. This means that, even if the autosave is corrupted, the player should at least have whatever progress they had made when last they closed the game.

And over the course of the week, I encountered a surprising number of bugs and minor touch-ups to be made! (Which don't seem worth detailing here.) I think that I have most, perhaps all, of these issues fixed now!

As to my "Wandering Visual Novel" side-project, I continued work on the tile-editor. While there is, I believe, still a fair bit of work to be done, I finally brought it to a point at which I felt that it was ready for a demonstration of its use! And indeed, I posted a video showing the process of creating a simple environment in the tile-editor, and brief gameplay in that environment:

(Also, I've been wanting for quite some time to make some use of the particular royalty-free music-track that plays in the video. I'm glad to have found a use for it! ^_^)

I've since started work on a character-editor. It's only just begun, but I'm fairly happy with the start that I've made, I believe. ^_^

And finally, you may recall my previous side-game, Night River. Well, I recently had some Let's Players inform me that they'd played it! It's really great to see people playing the game, especially when they seem to enjoy it. ^_^