THE DEV BLOG IS BACK! This week we talk about Lemnos! The volcanic (because, why not?) ancient Greek city, home of Hephaestus!

It’s been a while since I did one of these. This week, we’ll talk a little about Lemnos, one of the later worlds in Okhlos! 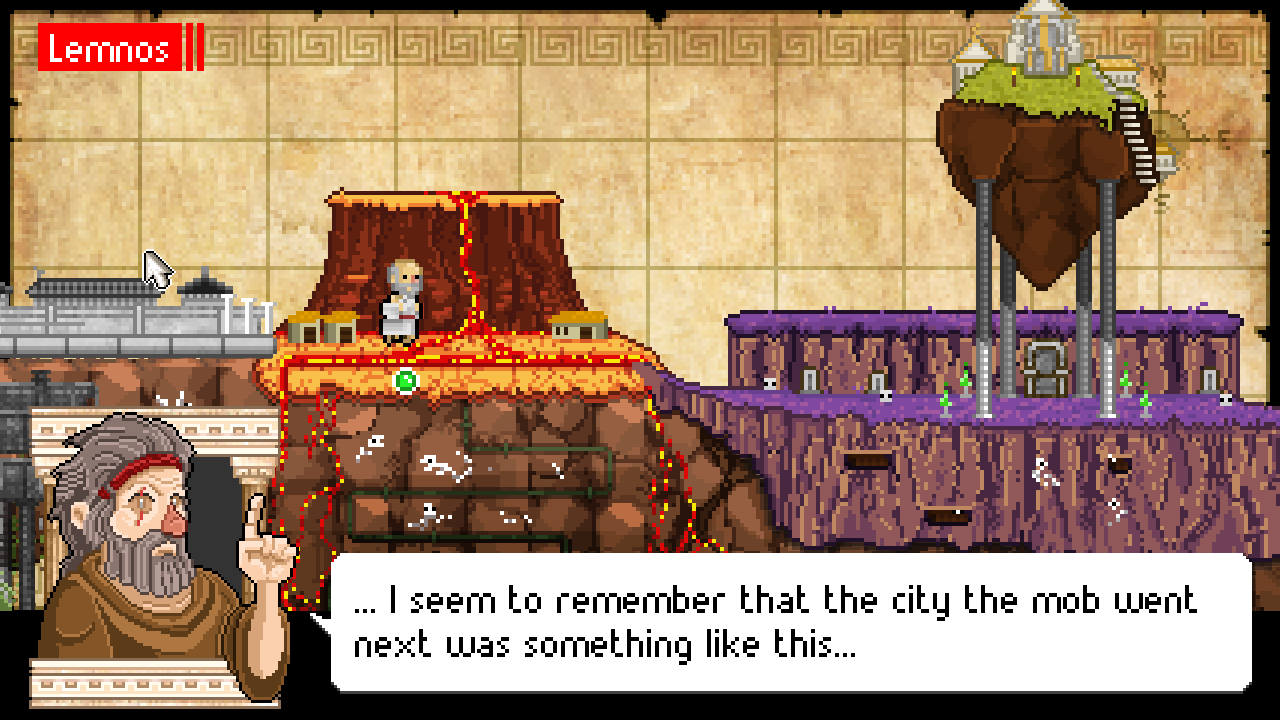 Lemnos is a Greek island, and the mythical Lemnos was sacred to Hephaestus, god of metallurgy, so from there, we imagined a city inside a volcano. Magma rivers, blacksmiths, forges, and there is a law that requires every videogame to have a fire level. Thanks Mario and Megaman!

So, for starters, we have the basic layout. It’s all cavernous, red and yellow. Exactly like inside a volcano. These are the first level boundaries that go above the horizontal line. We had some problems with these, because the bottom ones were between the user and the camera. Luckily, we usually use a script for buildings that fades into alpha everything that is between the camera and the player. We had to tweak it a little bit but it is working fine now. 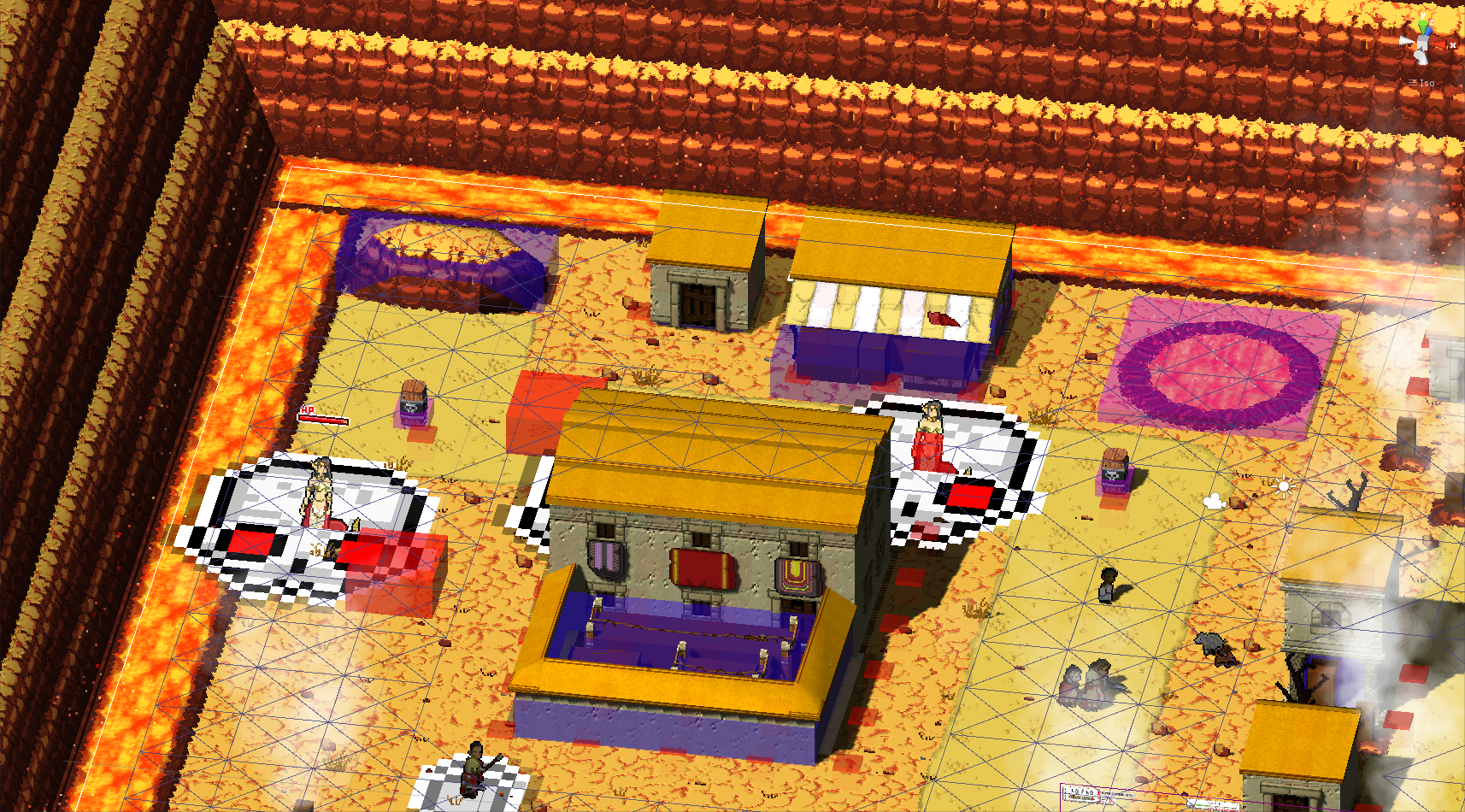 Another unique addition we have in this world, is that all boundaries have these magma rivers flowing down. We used the same script we use for the fire hazards, we added a collider with a trigger, and it worked immediately. We could do a test in minutes. All very cool.

It really adds some difficulty when you are navigating the environment. Right now we are tweaking and balancing numbers to see how much damage it should deal, and all those sort of details. Another thing we are still debating is whether it should damage enemies or not. Right now, it does. And it seems like a very natural and consistent behaviour, but we know that in some instances you might abuse it.

And because we are talking about hazards, another thing that we have in Lemnos, are fumaroles. Fumaroles don’t hurt you or the mob, but they cover your field of view, so it can get very annoying.

We have a few more hazards that we don’t want to disclose right now, you will have to reach Lemnos to find out ;)

In the enemies department, we have the well-known Automatas, which are present in other worlds as well. In this level, they have a particular reason to be in here, Hephaestus is the one building them! But besides these awful self-destructing robotos, we have a few new additions:

For starters, we have the blazing cyclops. These cyclops throw fire boulders to the mob. Pretty rude.

They have some changes compared to the classic rock thrower cyclops, besides the boulder that spreads the fire, their behaviour is a little different. In terms of HP and attack, they are more powerful than they fire-free counterparts. 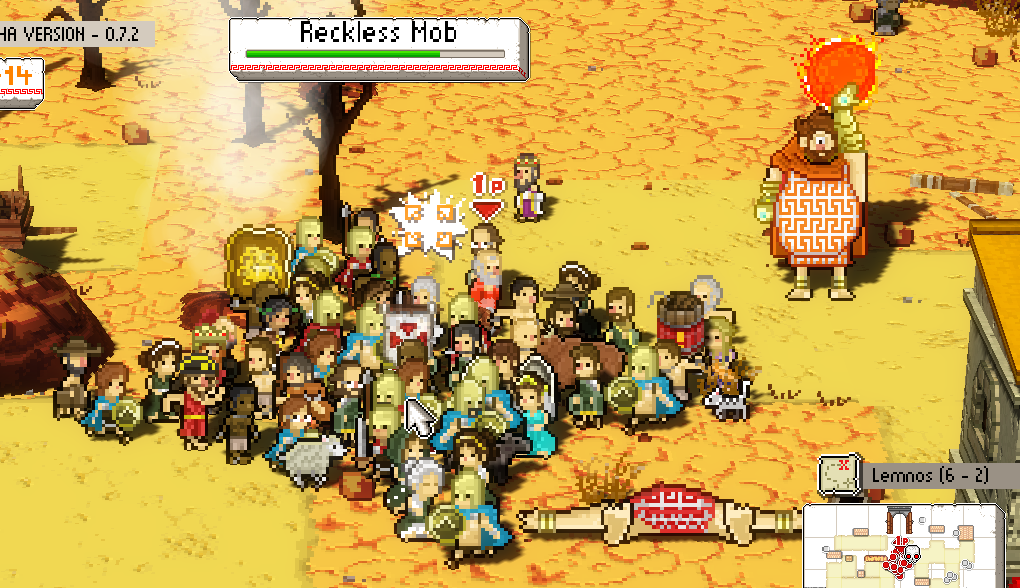 Another new addition (that we might use in other worlds in the future) is the blazing Lamia. We have the poisonous Lamia in Atlantis, which spits poison to the mob. Her counter part here spits fire boulders (similar to the blazing cyclops), and eats pedestrians and people from your mob! 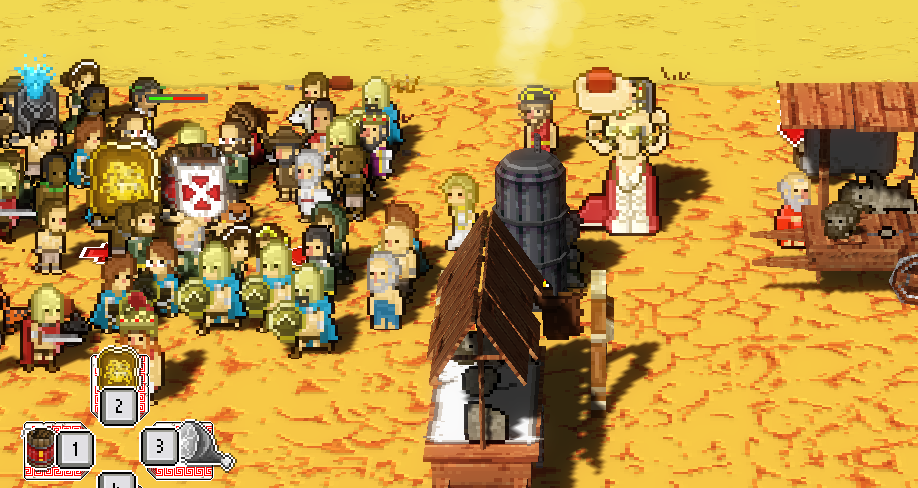 Finally, we decided to give Lemnos a special touch, so in the camera we added a distortion effect. Basically, what we did was to add a plane with the distortion material with a shader we found online, that distorts in the parameters we want what’s behind the plane. We are still tweaking some values for it to be cool but not nauseating.

Funny side note. I still don’t know what happened, but last time we checked, the plane inverted the Y axis, and everything went upside down. Weirdest bug of the week.

Well, that’s everything for this week! We love comments and critics, so feel free to write us to let us know what you think!

As far as the game can still run on "semi potatos" the filters and smoke are great visually!