Post news RSS A Tale Of Toast, From Crumbled Beginnings

With the two year anniversary of Folk Tale development fast approaching, its an opportunity to look back at the game's humble beginnings, and examine some of the decisions that have caused delays along the way.

With the two year anniversary of Folk Tale development fast approaching, its an opportunity to look back at the game's humble beginnings, and examine some of the decisions that have caused delays along the way.

The first few months of the project were spent in isolation learning the intricacies of the engine and assessing project feasibility. I knew the project would need to raise funding to complete development so I planned to tackle most of the technical risks up front to build credibility and demonstrate an ability to deliver. While my programming skills were decent, many of my other skills were rusty having laid dormant since leaving the games industry fifteen years prior. I very quickly realized I needed help, so with a prototype held together with nails and glue I shared my progress in the game development forums.

By late summer 2011 Pete had joined the team as a writer and had become instrumental in driving the story and humor of the game forward. As an author of zombie-themed short-stories, I had no idea whether Pete could turn his hand to lighthearted comedy or not. Reading his first few submissions, I admit I struggled with letting go of the remnants of high fantasy present in the early prototype and adopting gangster goblins, camp wizards, and a faith based on the worship of toast. But the more drafts Pete scribed, the more I became sold on his vision. All his great ideas however presented a dilemma. How could our small indie team with just one animator handle the volume of animation work required to effectively tell the story. Slashing admittedly great work to reduce the length of each scene, I bit the bullet and committed Tom our animator to the huge burden, knowing it to be the first decision that would significantly push back the delivery date. With a whopping ten cut scenes in the demo, in hindsight it wasn't something we should have tried to tackle.

Playing the first build again - which in reality means walking around a small area watching some very basic pathfinding - I'm surprised at how much potential it showed. The prototype was good enough, and over the summer of 2011 the team grew in size with collaborators joining from the United States, UK, and Europe.

How did we go from a gritty looking medieval scene to the colorful world of today? Folk Tale was going to be a humorous and entertaining game, and that didn't fit particularly well with the semi-realistic art style of the prototype; the early characters produced by the artists had more of a WOW look than life-like; and on a technical level we could keep shaders computationally inexpensive by avoiding normal maps thereby helping performance. Weighing all the factors, the decision was made that we would migrate towards a hand-painted art style. That process wasn't immediate, evolving over the course of the following year through trial and error. Without a concept artist to call on, the creative process started with me as Project Lead creating reference models or annotated image mash-ups, before being handed over to the artists to contribute their own ideas. Briefing multiple artists this way was problematic. While there was a convergence of style, there were slight inconsistencies between assets due to each artist's skill level and interpretation that would persist for another year. 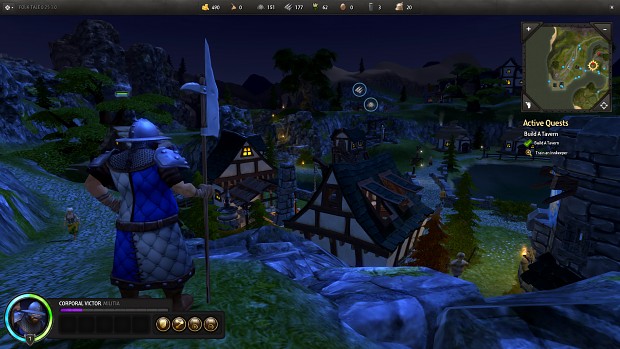 Village Life As It Exists Today

Eighteen months in, and the team had settled into a workflow that while not perfect, was yielding consistent results thanks to each member focusing on tasks that played to their strengths. Project quality had improved significantly, and the only inconsistencies that remained were in the textures. We could have overlooked that, but knowing we'd be asking the community to help fund the game, we felt a duty to strive for perfection. To help address the inconsistency issue, Rich assumed responsibility for art direction overseeing the production of all models and textures, a timely appointment as Hayden joined the team part-time as a 3D artist. Tom was assigned ownership of all technical art ( skinning and rigging ) and animation. With Rich finishing an excellent remake of the snow covered Monastery Of The Mangy Wolf , and Ben finishing a similarly great job on the volcanic Old Forge area, the Goblin Swamp was now looked sparse and was showing it's age having been the first zone to be modeled many months ago. So we expanded the scope of Rich's assignment to include not only a repaint, but the remodeling of all the swamp assets, and that required more time.

In September 2012 Steam Greenlight launched, and propelled Folk Tale from obscurity into the limelight. Everything snowballed and after 104,000 visitors with 67% voting "Yes", Folk Tale was greenlit in the second round of selections on October 15th. The comments came in thick and fast as the unique visitor count continued to climb towards the 200,000 mark, providing us with valuable early feedback. One of the recurring observations was that our initial plan to use just one voice actor for all the characters wasn't going to cut it. With zero additional budget for voice acting, I turned to the voice acting alliance forums and shared what we hoped to achieve. The response was tremendous, and after receiving around thirty auditions in just 24 hours, we closed the post and selected ten talented performers to work with. As a community request-verging-on-a-demand, it wasn't on the project schedule. Coordinating legal contracts, recording sessions, processing, editing and slicing hundreds of lines of dialogue over several months was extremely time consuming and diverted many hours away from development, further adding to slippage.

Expanding the scope of assignments did however have a positive outcome in that I personally gained some much needed breathing space to cope with ever-increasing demands on my time. As project awareness increased each of my responsibilities - programming, design, team leadership, marketing and business - all ballooned. The success of Greenlight had unexpectedly forced us to up our game on a number of fronts. Our marketing communications had been somewhat limited to the standard-fare of social media, so I spent Christmas writing our email marketing platform with the inaugural email going out as we welcomed in January 2013. Then there was the increasing globalization of our community requesting the game be available in multiple languages. With the original plan only allowing for English and lack of budget once again an issue, I turned to the community and set about writing the Community Translation Tool. It would of course be easy to ignore such requests, but that would spoil the best part of what it is to be an indie; being able to interact with Gamers on a one-to-one basis and inviting them to share in your passion. Spending the extra time means the demo will be that little bit better appealing to a larger audience, and we need every win possible to maximize our chances of a successful Kickstarter campaign when it starts this spring.

The reality of why the project is taking longer than expected is a simple one: a small team with limited budget striving to deliver something exceptional leaves only one variable: time. If we let any aspects of game development slip, we risk not reaching our funding goal. Taking a little longer than planned and maximizing our chances of success is the right decision for everyone.

Beta Signup
For those of you visiting for the first time, applications for closed beta are now open. Please don't forget to opt in if you wish to receive the email newsletter.