Every ruler will have their own personal style of leadership. What will yours be?

Every player leader has their own style. Each person who chooses to be a Sovereign will end up with a unique settlement guided by their personal perspective on gaming and ruling. You will find settlements with neat matching rows of exactly the same buildings, named in ascending fashion. You sill also find settlement scattered with random useful buildings, with residents and production buildings in every district. Some sovereigns will rule through many ministers, others will try to lead the entire settlement by themselves. Perhaps most influentially, sovereigns will each find the size of settlement that is most comfortable for them. 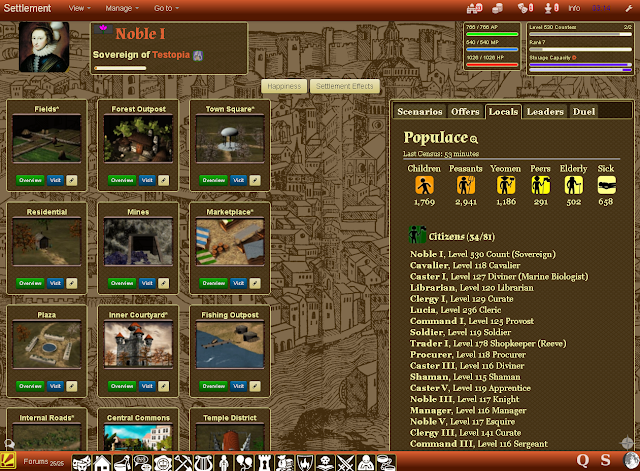 Not every settlement will be trying to climb it's way into the ranks of 'biggest' or containing the most high ranking districts. Many will find a particular size and combination of districts to be fun and easy to run, and this number often comes well before 13 at the top. Rank 3 is a good place to settle if you like providing for the agricultural needs of your region. Ranks 5 and 6 are very comfortable for a sovereign who just wants an independent production chain. The higher ranks become more appealing to production specialists, who want the best troops, gear or transport. Thus, production-based settlements will find themselves trying to raise their settlement rank to reach the high ranking districts that provide bonuses and buildings for their preferred crafts. Some settlements will try to follow the best path to huge piles of gold, while perfectionist sovereigns may actually demolish lower ranking districts in order to make room for more high ranking districts. 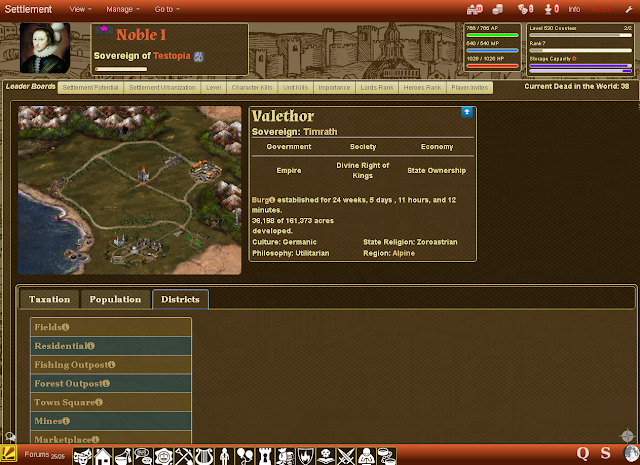 The primary testing settlement of Testopia, ruled alone by Noble I, has settled comfortably at Rank 5. In this state, the settlement has finally become self-sufficient. Residencies are sorted reasonably, with peasants split between Town Square Cottages and Central Commons Tenements. Yeomen and Peers are housed solely in the Residential District, within Houses and Villas. There is a little residual residency in the Fields. The Fields and Forest, and Mines districts provide much of the raw material needed for the settlement, with a little extra coming from the Inner Courtyard. The Fishing Outpost is used primarily to produce Fillets to support the Pastures which produce the necessary Livestock for the Butcher and the Weavers. The Mineral Mines to Mints balance is almost correct, so Testopia is producing currency. It is also finally producing Paper, providing for Libraries and additional research spots. 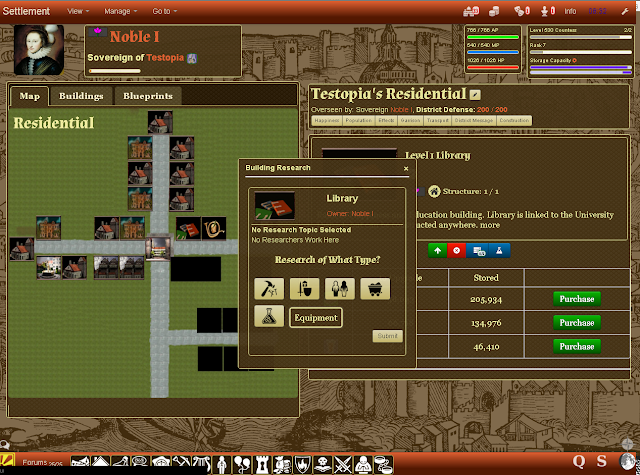 This recent shift toward balance has allowed Testopia to start considering the Happiness of it's residents. Buildings with NPC and Player residents create more demand for district happiness, so Testopia focused on the Fields, Town Square, Residential and Central Commons districts. Within each you can check the individual happiness scores and create buildings that provide for your lowest scores. With a mostly complete production chain, a Rank 5 settlement should be more than capable of (eventually) producing enough to build the basic happiness buildings. Keep in mind, higher ranking districts tend to provide settlement-wide happiness bonuses. Every decision when ruling your settlement is a stylistic choice.

Testopia is not the only example of Brunelleschi leadership, and other settlements are more regularly tended and less used for arcane testing purposes. Testlandia, Slowland and Construction Land are also primarily testing settlements and have been managed unconventionally for this purpose. Players are encouraged to explore other settlements before deciding to start their own, or to stake a flag in the wilderness and boldly start from scratch. The Leaderboards offer a variety of ways to compare your settlements and personal scores and can be checked through the 'Info' tab on the top bar of the Brune UI.