Evening all. It’s been a week dominated by, as you might expect, drilling down on the metagame we’ve discussed heavily in recent Mondoid blogs. It’s the key to the RC3 release, and the thing that all the work around it is going to be hung off. The thing is, when we get to actually describing the task at hand it can get a little in-depth and ‘codery’. So let’s start this weeks PZ development round up with something fun. Crawling zombies! 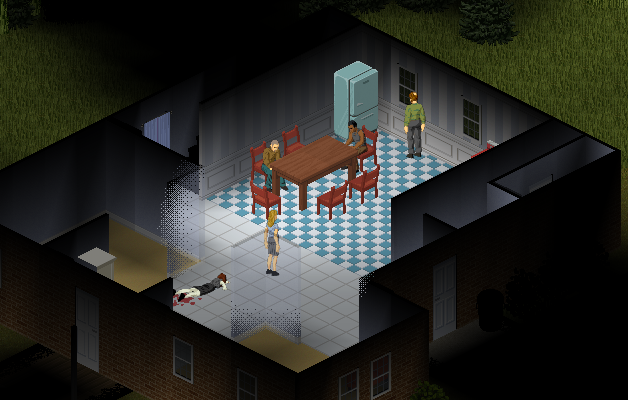 Horizontal deadheads are perhaps one of the most requested features for zombies in PZ, and pretty much a requirement for any zombie fiction worth its salt. So now players and NPCs can attack things on the ground we can include crawling zombies. Part of the work we’ve been doing towards this has been in expanding the sprite canvas – originally we were confined to a player sized rectangle so animations that saw players or zombies lying down, for example, would mean parts were cut off. As for handling the visibility of low-lying zombies, making them dangerous to the unwary, well that’s still a work in progress.

Also seen in this image (we’re working on a vid for the next blog, we ran out of time on this one) are the seated NPCs we discussed last time around. Although largely a cosmetic addition this means that characters won’t stand around staring at walls when they’re idle, and as such look far less like mental cases. In terms of coding meanwhile, due to the increase in animations, this week we also dealt with load times that were in risk of ballooning out of control – and have rewritten our texture system to allow texturepacks to be packed into a single file for much faster access.

Metagamin’
In terms of that in-depth work on the metagame, meanwhile, this week’s focus has been on the way PZ tracks loot as it makes its way unseen around the Muldraugh map. Prior to now loot within the meta-game was just a value called 'loot' which was distributed between buildings and carried by NPCs, which magically changed into actual inventory items once you got close.

The problem from this comes from the fact that NPCs in the meta-game would now not be able to pick up better weapons, and once the loot spawned it would only ever be of the type appropriate for the NPC's safehouses. It wouldn't represent the types of loot that’d be found in the various places that NPC groups had been looting. To allow for loot to be more interesting in the meta-game, then, we've expanded the system to let allow inventory items actually exist within it.

(Incidentally, ultimately our plan (post-RC3) will be to rewrite the inventory item system so it’s completely lua driven, which would let inventory items inherit details from a lua template item. This would mean that individual inventory item objects would be tiny in memory, containing only the type, while still allowing all the properties of the inventory item to be accessible. In RC3 it's possible that weapons, and other equipment, may have a limited effect on an NPCs in the meta-verse, but it's definitely something we'll be trying to expand on as much as possible.)

Next up: Romain’s work on the XP system we discussed two weeks ago continues apace, and it shouldn't go unsaid that whether or not this gets into RC3 depends on when the critical work on the NPC metagame is completed (more on that work back in the State of the Zomboid Nation and Metaverse blogs).

The new XP system currently looks like this in-game, but please be warned that this is super WIP – very much waiting for care and attention of artistic types like Mash and Andy to beautify it. “Something to add to what we’ve already mentioned” pipes up Romain while I write this blog, is how books will work. “If you find a Beginners Carpentry Book you can start reading straightaway, but it’ll take a while and you’ll have to set aside several nights of reading. The further you get through the book, though, the greater the XP multiplier when you’re out building things – until of course you level up and a new book is required.”

Ultimately (and we’re talking super-ultimately) Romain adds that you’ll also gain this multiplier by watching NPCs at work – witnessing these various skills in action in person. His other work this week has been through researching nutrition – with the food you eat being given realistic calories and health properties. So, eating reduced numbers of calories might have an effect on your strength for example – while a six month diet of crisps (chips, for our American cousins) probably won’t work out well for you in the long-term.

A few more items of note! The first is that we’ve made a limited alpha release of EasyPickins’ RC3’s modding tools to some of the mod community’s cognoscenti – and already some of the feedback and work we’ve seen has been hugely exciting. We’ve done this to help EP with bug-fixing, and to ensure there’ll be help on hand for new users when the time comes to release, but its also had the pleasant side-effect on some cool new tools hovering on the periphery. The prime example of this being a random terrain generator that the ever-amazing Mendonca has got working to give people a spot of auto-generating land to start building on.

While we’re on the subject of Mendonca, here’s a video he took of his early efforts with the current iterations of the new modding tools. Please excuse his chunterings and warblings as goes about the act of creation. He’s from Manchester, and these are the sorts of noises they make there.

Finally, we thought people might like a sneak peek at our new website. This is something we’ve been filling up with content for the past little while, and should hopefully play a role in providing clear information as to build status once RC3 is out and we’re in a more regular stream of updates, as well as explaining what our game is to new survivors and catering more fully to posts specifically aimed at our community and bristling band of modders.

This is an early mock up of a page, so be gentle as contents will settle during transit, but we’re pleased with the way it’s going – and can’t wait to let you loose on it. 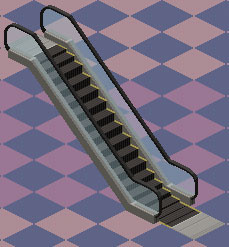 The teasing keeps on coming! Can't wait to finally play this update

i hope this game will continue to grow with so much passion forever!
(...or at least until I will be able to play. ahahah!)

I'm loving what I see every time you update, what you're doing is great, and I'm so glad you've improved things as much as you have, keep up the great work!

I feel happier with every update!
Project Zomboid has some amazing potential

yeah man, you rock, I love reading every single news by you, for it makes my day shine brighter than the sun. Seriously though, I love reading you. And also slaying dragons.

please keep up the good work

I wonder if we will have things like basements and sewers when RC3 goes public.

looks fantastic! and it was a shame about the robbery what scum, They make us wait longer now!!!

Before i bought this game i read it up and it was my kind of game, I have had it for a while now and i still jump around when i read these updates,

BUT... i dislike it when you hit a NPC or Zomboid with a weapon like the bat and they fly off for about 30 spaces or more,,,, means i gotta go run and hit em again :C

Also with my rc2 i have a new type of zomboid but when i watch it on youtube i see the old zomboid with the big heads why is my RC2 different! anyone help me pls? its bugged me for ages now

And finally the worst bug that you guys need to fix is food! If i eat something and leave the time at the normal speed it keeps me full for like 2 mins however if i eat the same item of food which is any btw and then i speed up the time and keep sleeping it keeps me full for like 7 days, it made me live for about 2 years without having to leave 1 kitchen so fix fix fix

thanks Indie Stone for your great work now release the wonderful RC3 so i may continue to smash Zomboids heads in :D

Look at that, there is a New, inside another new, Newsception!

keep up that endurance guys!

such a great game!!!! cant wait to play this update!