We know you have been waiting long for this game, some may think it will never be finished. However, i can assure you we're still working on it albeit a bit slowish.

Work in Progress
We are still actively working on Tiberium Crystal War 2.0
Things are going a tad slowish but we're still making progress.

Visual Studio 2012 Code Base
The code-base is now moved over to the Dragonade 1.8 version with 4.2 TT support, created by WhiteDragon originally for C&C Renegade itself which's W3D Engine Tiberium Crystal War 2.0 is based upon.

Ingame Team Notifications
Building sound and message notifications, unit purchase notifications, and radar visibility are now coded to not play/view unless the Command Post and/or Operations Center are alive and kicking.

Armory Healing
The GDI Armory code is also done where it will repair friendly units within a certain radius of it. This simulates the C&C 3 function to restore units back to full health by putting them inside the Armory.

Stealth Detection
Stealth Detection is functioning as well already where it will decloak enemy stealthed units while using a GDI Pitbull or Nod Attack Bike.
We're unsure if we want the defenses to destealth enemy units in range, although they will fire at them at will.

Unit Veterancy
The veterancy for units is also working. There are 3 levels of veterancy just like in C&C 3: Veteran, Elite and Heroic.
They will sport icons created by ImperialKaskins, a single chevron, a double chevron and a golden star which appears near the unit when it is promoted. These icons will stick to the unit and are only visible to friendly units so you don't give away your position to enemies in certain situations.

Upgrades for the GDI Armory:
- Composite Armor: Grants Rifle Soldiers, Grenadiers and Missile Soldiers more hitpoints for their Kevlar Vest Armor.
- Power Packs: Increases Zonetrooper hitpoints and makes them regenerate health while they are idle and not moving.
- Scanner Packs: Will grant the Zonetrooper the ability to detect stealthed units in a nearby radius.

The Commandos
Commando gameplay just got more interesting! As some of you may know both the Nod and GDI Commando can kill a building with just 1 Timed C4.
This Timed C4 runs for 1 minute and it will announce publically it was placed on a certain building. Engineers, Saboteurs and Spawn Guys can disarm this with their Repairguns.
In the past when you used your Timed C4 with a Commando you had to return to base and refill your ammo, this is no longer the case. In TCW 2.0 the Commando will regenerate his Timed C4 every 2-3 minutes (may be tweaked later).

The Sniper
The GDI Sniper will kill ALL enemy units in 1 single shot. Its weapon will have a semi-high reloading time though so it is not as easy to pick off targets with it and in addition to this there is a maximum of 2 Snipers per team. A skilled Shadow user is the ultimate counter to this character.

Stolen Technology
Unit Technology from the Weapons Factories, Barracks and Hand of Nod can be stolen by the enemy! With Nod you use a Saboteur to get inside the building and steal Tech, with GDI you can use the Engineer to do it. Note that the limited ammo repairgun of this character must be full while attempting to steal technology.
WHen successful it will unlock enemy units in your Purchase Terminal meaning if you stole GDI Weapons Factory technology with Nod you can then buy Mammoth tanks and what not. And vice versa for Nod units on GDI.

Superweapons
Superweapons are not yet functional but worked on. They will have simular cinematics as seen in TCW 1.52b where the Nuclear missile will actually take off into the air etc.

The Spawn Dude
The guy you spawn with, the Spawn, now has 3 variations in the purchase menu which can be switched to for free:
1- The Repair Spawn (equiped with a repair gun that can slowly repair and disarm things as well as capture tiberium spikes)
2- The Shotgun Spawn (equiped with a highpowered short-ranged Shotgun with 8 shells)
3- The MP5 Spawn (equiped with a 30 round automatic MP5 rifle)
This should add some variation to the start of the game mostly :) In addition to their primary weapon they also have a Knife btw.

New Images
The following images will be used for 2.0 advertising and stuff:


Thanks for reading
I hope this covered some of the questions you may have about the game. There is more to report but maybe later :) We are actialy developing it but slowly, it will be available "when its done" and that will be a few months work at least.

Sidebar Icons Preview
Here a small preview of the sidebar icons, created by ImperialKaskins and zunnie: 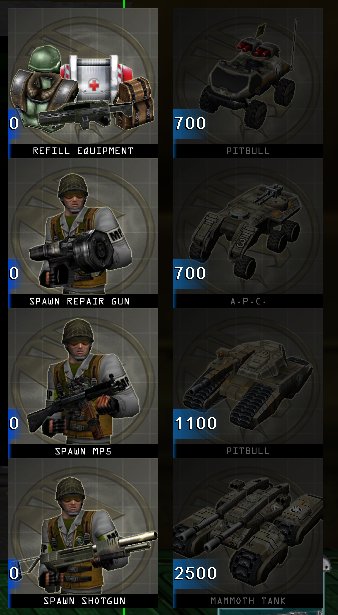 For the Armory, you could make this "Radius" small enough to where it'd only effect units directly within the Armory instead of nearby it.

Well, i thought of that, but considering there is a Purchase Terminal in every building to "refill" your character the Armory would be never used or be useless. So i decided to have it regenerate players healths while they are in the base or very close to it.