The Feralands: a vast, mostly lawless region that encompasses most of the northern half of the continent and separates Anorthile from Thenodar...

A First Look: The Feralands

The Feralands: a vast, mostly lawless region that encompasses most of the northern half of the continent and separates Anorthile from Thenodar. Once the seat of great kingdoms, the Feralands is now a region divided among petty dictators, weak city states, and brigand bands. This ruin was brought on by the War of Calamities, a terrible war that decimated many regions in Althas and left the northern half of the continent in chaos. The Feralands are divided into three regions according to the kingdoms that once occupied it. 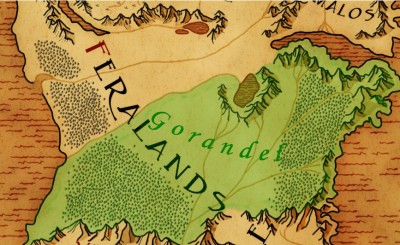 Gorandel is the largest region of the Feralands, occupying the southern half of the main Feralands region. The vast plains of Gorandel occupy the center of the region and are bordered on the east and west by great forests.
The region of Gorandel was once home to a kingdom of the same name, one of the greatest Anointed Kingdoms of Althas. The people of the Kingdom of Gorandel were lovers of knowledge and wisdom and delved into many secrets of magic and history. They were great architects, building monuments and grand cities. Now, only ruins remain..
In the War of Calamities, Gorandel was one of the hardest hit kingdoms, with some of the most terrible battles taking place there. As a result, nearly every major city or structure was left in a state of partial or complete ruin. After the war, many groups fought for control of the mostly ruined city of Nandorthel, Gorandel's capital. After many bloody conflicts, Nandorthel is now in the hands of a cruel tyrant. The settlement built within the ruins has come to be known as Grimvale. Other people live in the forests or along the rivers in the plains hoping to go unnoticed by the brigands and slavers that roam much of Gorandel. Because of its sheer size, Gorandel is both one of the most lawless and yet also one of the safest regions in the Feralands. 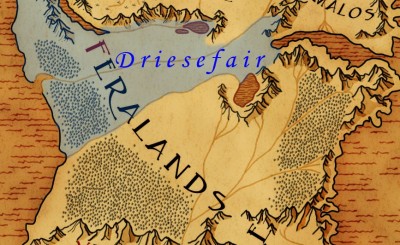 Driesefair is a fertile land of rivers and rolling hills. The eastern hills are only lightly wooded, with small isolated woods in valleys. The west is divided into the forest region in the south and the Strand in the north.
The Kingdom of Driesefair that once occupied this region was a land of simpler folk, farmers, woodworkers, and hunters. There existed a sharp distinction between the people of the city and the people of the countryside. To some extent that distinction continues as those who live in the major settlements of Ironrend and Greyport are quite different from those who live in homesteads in the east.
The peninsula once known as the Strand, now called by many the Forsaken Strand, is the strongest state in the Driesefair region and has influence throughout both in its own region and in Gorandel. The tyrant Ardor rules this region with an ironfist and is one of the most feared lords in the Feralands, wielding near absolute authority in most of western Driesefair. The eastern half of Driesefair is much more sparsely populated; people merely pass through on their way to Thenodar. The ruined city of Ecretei, former capital of Drisefair, has remained unconquered and unoccupied for centuries. The city is a place shrouded in mystery and dread; much of this sentiment likely originates from Ecretei being the site of the final battle of the War of Calamities. The land between the western forest and the border of Thenodar is a very dangerous region, with slavers and raiders from both the Strand and Nandorthel roaming at will throughout. 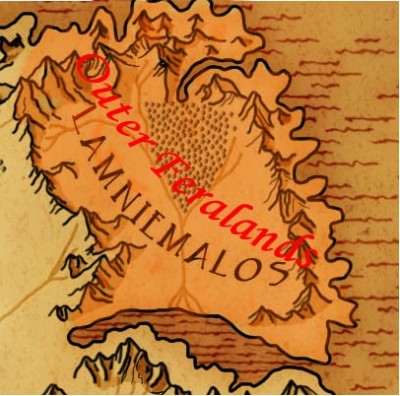 Located northeast of the main regions of the Feralands and west of Thenodar, Lamniemalos is the smallest region considered to be part of the Feralands. Rightly named "The Land of Mountain Walls," Lamniemalos is isolated from its neighbors by four mountain ranges as well as a gulf in the south. The "Outer Feralands" is a term sometimes used to refer to Lamniemalos.
Before the War of Calamities, the Kingdom of Lamniemalos was home to great miners and stonemasons. They built great strongholds and cities, making their land a fortress over the centuries preceding the war. These fortifications are likely why Lamniemalos remains one of the more intact regions of the Feralands, with Leomael, the capital, still at least mostly standing.
Lamniemalos has more organized states than the other two regions of the Feralands. The Somstrynd Clans, a group of four houses that rule the western mountains and the area surrounding their eastern slopes, are known for their great warriors and ruthless tactics. Their slave-operated mines produce iron, silver, and even gold, making them the most wealthy and powerful state in Lamniemalos. Leomael was ruled for centuries by benevolent lords, remnants of the fallen kingdom's nobility. These lords managed to hold the Somstrynd and other raiders - all drawn by the cities wealth - at bay for many years, allying with the Anointed Kingdom of Nosmalos. But after Nosmalos withdrew from the Feralands affairs, other unscrupulous lords allied with the Somstrynd and siezed the city. Now Leomael is under their harsh rule with the authority and wealth of the Somstrynd backing them up. Those who would resist them have fled north. Because of the power of these various states, Lamniemalos is perhaps the most stable of the Feraland regions. However, given the harsh policies of these states, Lamniemalos is still a perilous region to wander in.

The Feralands and the Upcoming War


With tensions between Thenodar and Anorthile set to boil over, the Feralands is a subject of much discussion in both camps. Both sides recognize the value of the resources the Feralands offer. Also, both recognize the threat the various states such as Grimvale, the Foresaken Strand, and the Somstrynd pose to both their forces and the people in general. And so for reasons of both principle and strategy, both Anorthile and Thenodar intend to bring great changes to the Feralands in the upcoming conflict. As the wheels of war begin to turn, the Feralands is set to be the stage of yet another war, this one bringing with it both hope for change and fear of what price might be paid for it.

We appologize for the delay. There was internal team business that requited most of the team's attention as well as some real life events that delayed this post. However, things are back on track now.

I'm really digging the lore that you guys have come up with. Keep up the good work guys.

The more lore specials that are released, the more I feel like an "image" of Althas is being created. The lore is extremely enticing and keeps me wanting more. Great job, and I already can't wait until next week :)

Hopefully we will be able to make it next week xD . But thank you. That is the idea of the First Look series, to create a general image of what Althas is like. Later, we will have more of the Lore Specials that give more obscure details like we did with Scurende. And after the First Look series is done, we will likely have another series, something like Althas Up-close that will be more detail oriented and focus on smaller concepts. And maybe there will even be something like stories from within the world laced in there too ;) . But of course, we don't want to have any spoilers.

Also,hopefully we will have some early in-engine development news for you; no date on that though. Just stay tuned.

This lore is really sounding awesome, although I hope I will be able to do something about the slaves and does the reference to magic mean we might be able to use it?

You will be able to effect a lot of things in the Feralands for better or worse.

As for magic: patience, grasshopper :P

Sounds amazing! I really love the lore so far.

Can I ask have you decided about the scale of world map? I'm sorry if this was already posted somewhere on this page.

The main landmass of Althas is about 26km end to end, which gives us a nice balance of open-world space, but also isn't too much work to handle in a decent time-frame.
As a comparison, the entire region of Thenodar is slightly smaller than Skyrim.

For a video game that's quite large. Skyrim is the size of Thenodar.

That it does. I have pointed this out before. But for a game to be playable, it must be of a feasible scale, allowing content aspects like quests to be completed in a reasonable amount of time. The MERP Middle Earth map, which was mind numbingly huge for a single player game, was roughly 26x26km map.

I didn't realize this was going to be an Elder Scrolls style game, for in that case I can see the reason for the size. Lore-wise it's still a bit jarring, though.

What other genre would this game be in?

There's Mount & Blade's style, for one.

I like mount and blade and it is a unique concept however if given the option I would pick large seemless openworld any day. (AC4, Skyrim, Wild Hunt style) the only problem with a large world is travel which is why even though I hate fast travel I end up using it eventually:( so since I dislike fast teavel I rather have a horse, ship, "mount", etc. pretty much anything that will let me get from point a to point b quicker.

Well obviously this game is scaled down from reality :P . This is a game, not "real" life. As for the FULL size of this continent...good question. Haven't thought about it :P . Obviously bigger than 26x26km xD

I know this is probably a really early question to ask. But does CryEngine 3 allow for Oculus rift support? if so, can it or will it be implemented into Lays of Althas?

AFAIK the Engine does support the OR, but we don't have plans for implementation official Althas support for it at the moment. It would however be possible due to the way we're doing gameplay, so maybe in the future.