System Lord's Kick Starter campaign only has 40 hours left. Please help give support and get your self involve in a great project.

Travel through the gate and become a System Lord and learn new technologies to rule the galaxy!

System Lords is a browser-based, massively multi player real-time strategy game and is created by 26 horses Production. English Playable on any device with a browser

First of all I like to thank everyone from the 26horses community and to the alpha testers helping out with making the game for what it is today. Now its time to kick start this game and make it playable for everyone. In order to make a good MMO it requires players. So I'm launching a 30 day campaign here on Kickstarter to help with funding for ad campaigns which will be launch on popular sites such as Facebook, Youtube, Reddit etc.. and to hire translators to add more languages in the game. I also need funding to hire a artist to go over my work that I have already done and boost the graphics even more and start designing the game expansion that is planned which includes unique console interfaces for each race added to the game. I'm also going to mention here on Kickstarter that work has already started on creating a non browser game that will be alot like Starcraft but System lords theme that will be playable on Windows and Linux. You will notice the more you pledge the more friend invites you get. This is to help get more players in the game for everyone. Helping to get the word out about the game is really helpful. Even though our goal is set to just 5,000 dollars it's really no where near enough. It will be enough to launch some ad campaigns though. I'd like to thank everyone in advance for anyone that shows support for the launch of System Lords.Here is a look at System Lords new mother ship being introduced into the game. It just needs a paint job. These are one of many things Kick Starters funding will be going towards. 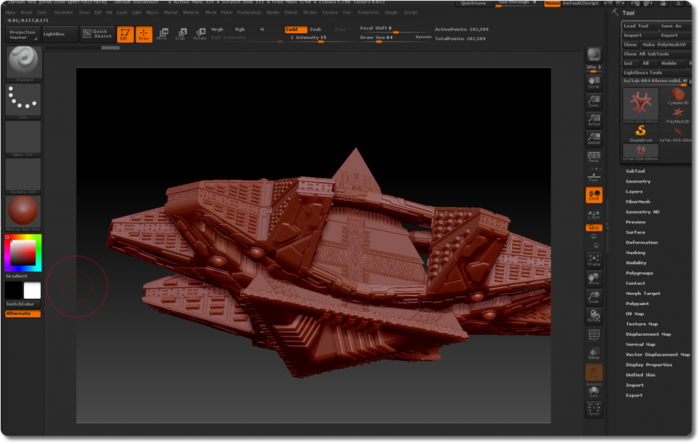 A thousand years before the great rebellion, before a warrior betrayed his God, and before Ra's defeat by the hands of a human. There was a time where a symbiotic race were still building their footholds and populating the galaxy. Travel through the gate and become a ruler on a back water planet to use the best of your parasitic ways to learn new technologies, enslave man kind and construct great vessels to carry your vast armies across the stars in your conquest to control the galaxy. 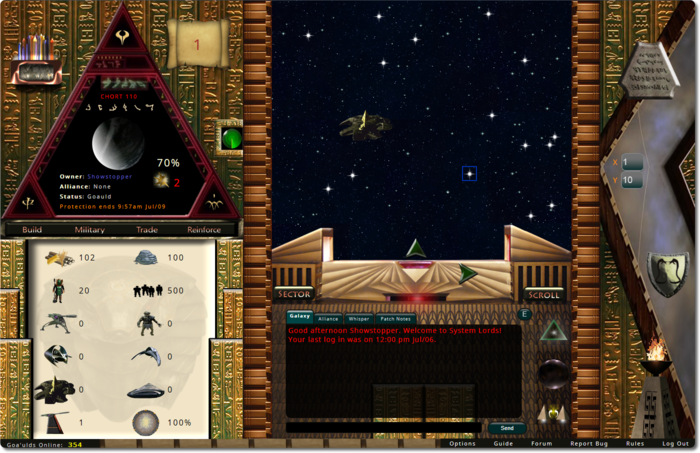 Putting the feature parts of the game a side such as

So lets put those things aside.... What makes System Lords so special to give you a reason to play it? The game is fair to play for all! What that means is unlike so many games in this class this game will not be set up where who ever has the most cash or is paying a subscription has a huge advantage over other players. This is why System Lords is being sold out right so you can't buy units for real money or any other digital item inside the game to give you a huge advantage over another dedicated player. If you want to be a System Lord of the galaxy you are going to have to earn it!This will be a game where you will pay for the whole seat but only use the edge!

System Lords is a very unique game that is filled with a ton of strategy. Each planet has their own unique gate address. Players can choose to use ships or fight through the massive extensive gate network that exists through out the galaxy. The possibilities is almost endless to how you wish to rule your planets and over every single human being you own. System Lords is designed around the concept of "you are a GOD and no one should rule over you!" It is encourage to take on this personality when you play the game. System Lords isn't just a game you play it's your new life that you will set for your self in this vast galaxy where you will spread word of your existence on every planet across the galaxy! 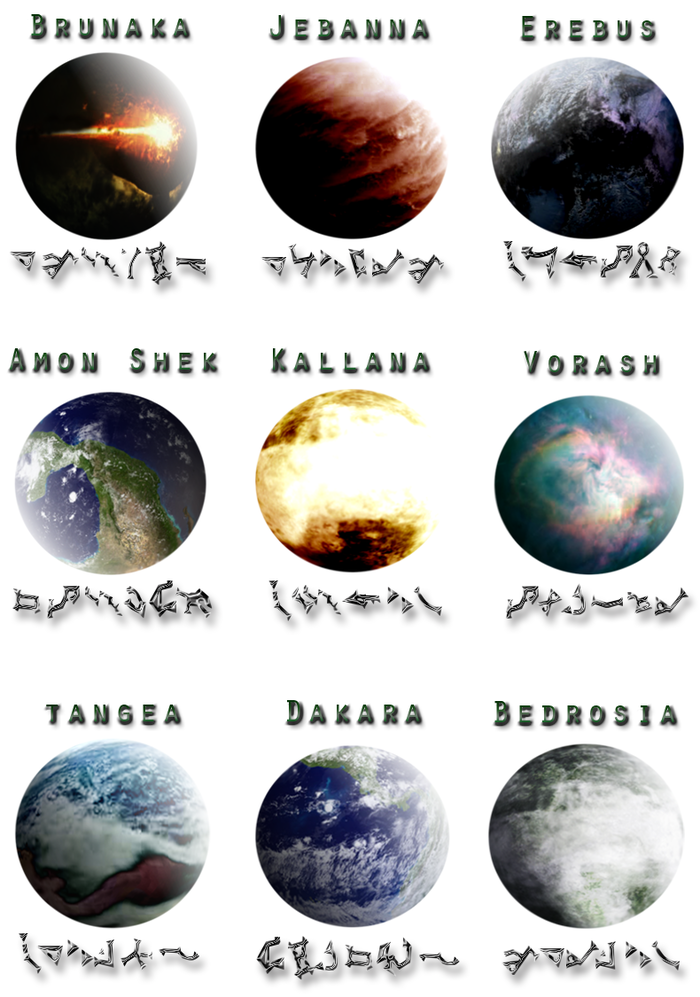 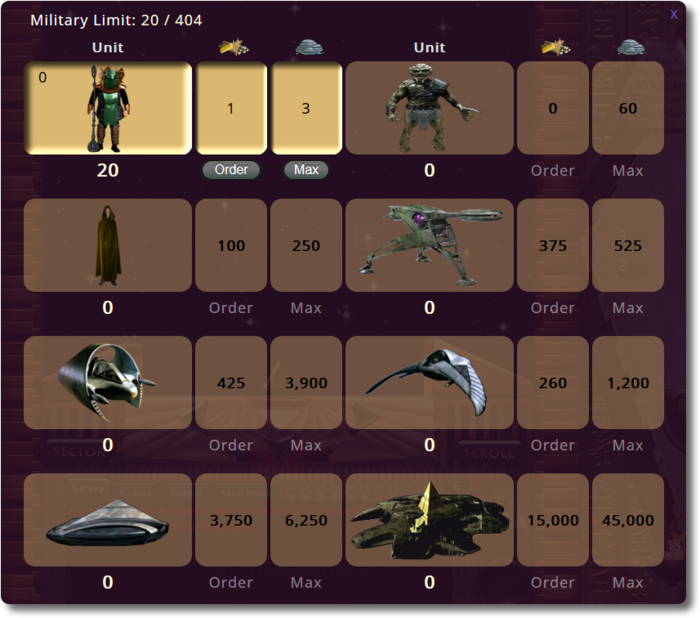 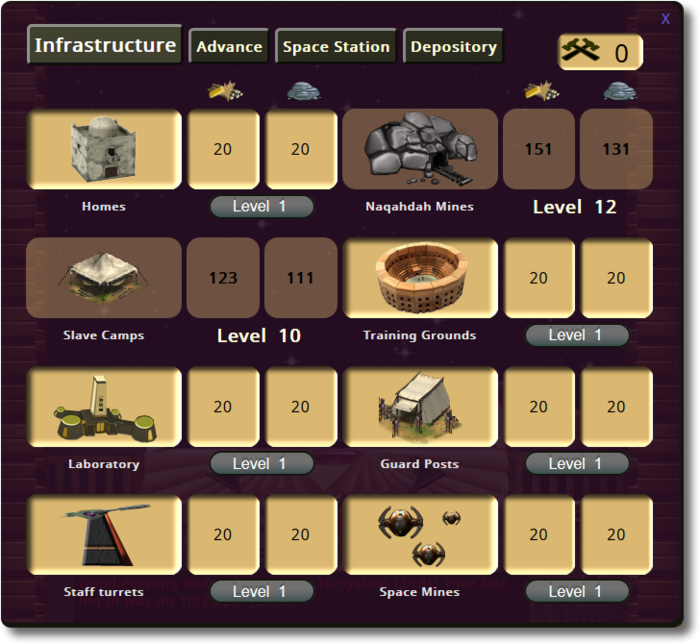 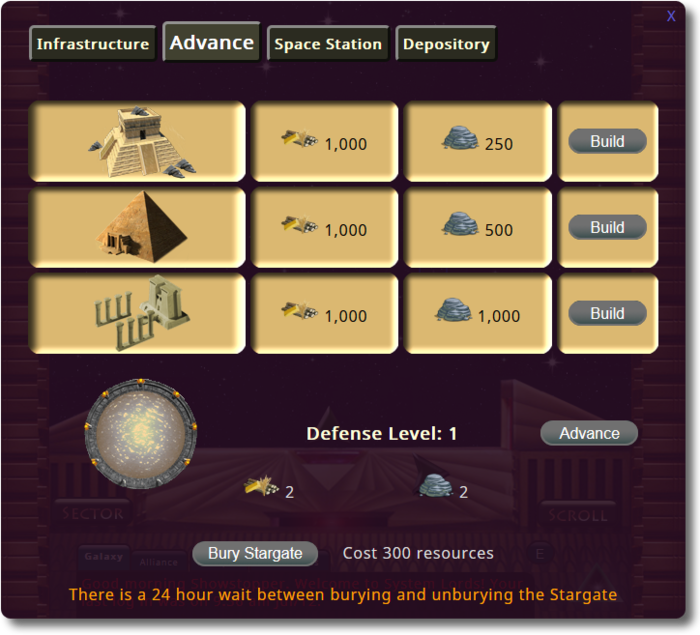 Level 8 different building types as well as 3 large structures which determinds the strength and worth of your planets. 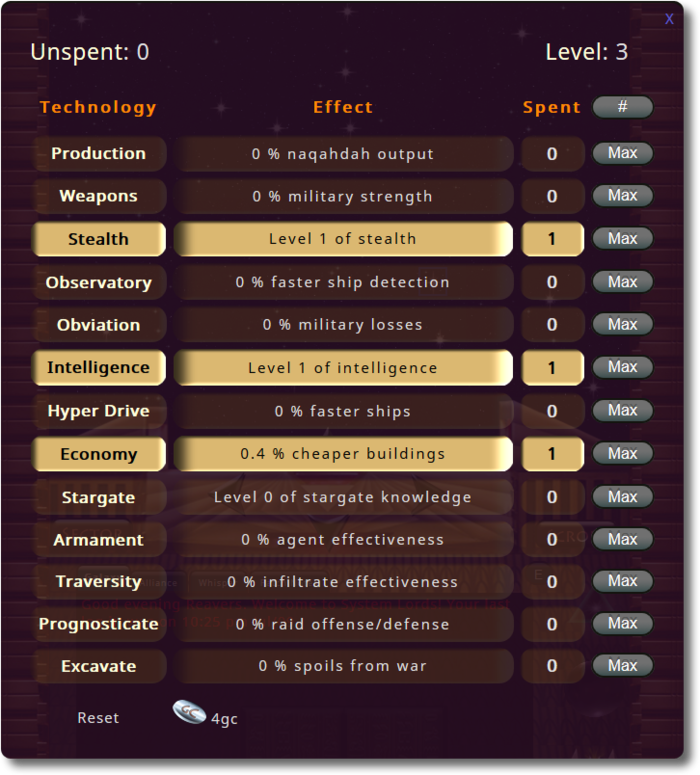 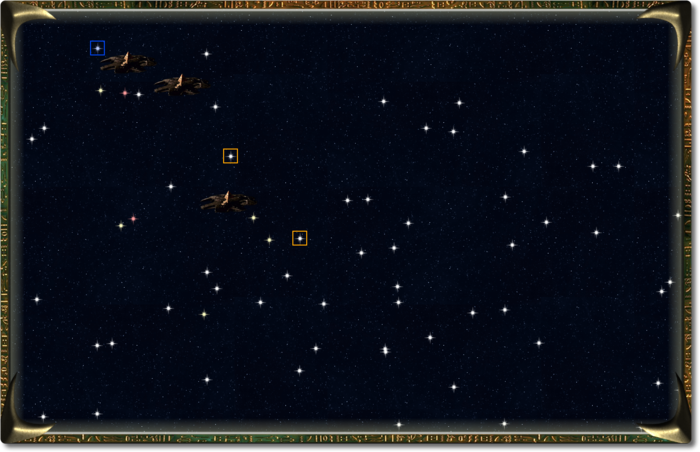 The galaxy has a real distance between stars calculated in light years. Every planet has a different gate address with a nice random looking constellation of star formations on System Lords graphical animated map. Players can also save solar system locations with the games GPS system.System Lords has 3 different types of maps. A free scrolling map engine to scroll across the galaxy, a map to see what system lords control what sectors and a zoom in sector view. Also unlike most browser games in this class you can see your ships and enemy ships moving across the galaxy on the map. 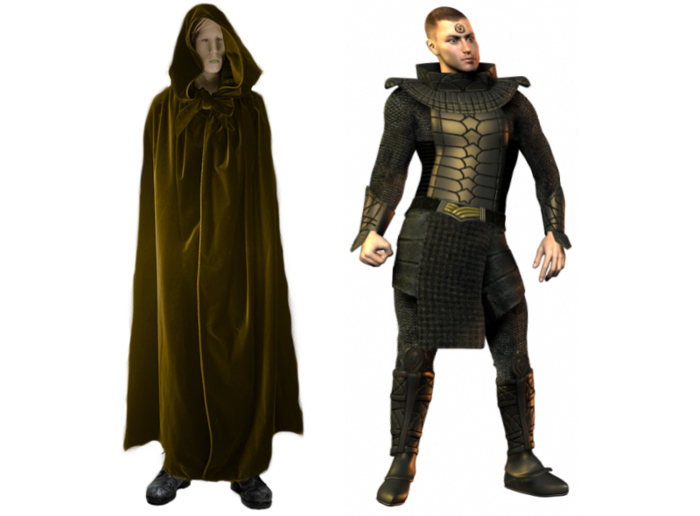 Create or join an alliance and conduct strategic battle plans. Each alliance gets their own personal forum and profile with custom made banners. Communicate with your friends and alliance through the games chat and messaging system. Easy to use interface with incredible navigation around the game. Map pinging integrated into the system lords chat system for easy linking to planets and profile routing with in the game. Also comes with a game guide that is embedded into the game mechanics and pop up tool tips. So figuring the game out for first timers will be easy.Players can also track their progress using line graphs to compare their growth history with friends. 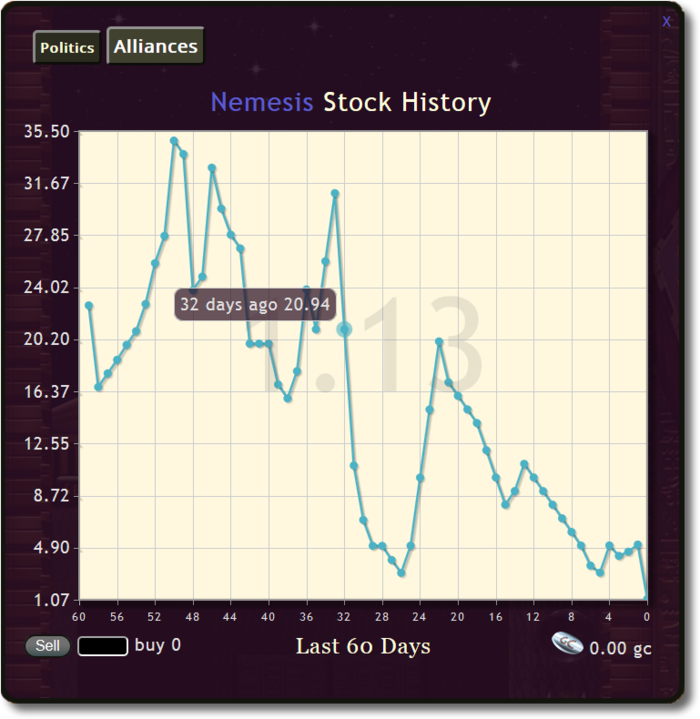 Every alliance in the game is worth a certain amount of stock. Players can buy and sell stock just like you would in the real world. The alliances stock is effected by players joining/leaving the alliance, war, and player growth that are in the alliance etc...Also if an alliance is full a player outside the alliance can choose to kick another player out of the alliance and replace them if that player has enough supremacy points to do so. So the galaxy is a dog eat dog world where the power you have you have to fight to keep it.Alliances can declare war on other alliances. There is a war meter that determines rather or not an alliance can declare war. When an alliance loses or wins a war the price is quite huge. 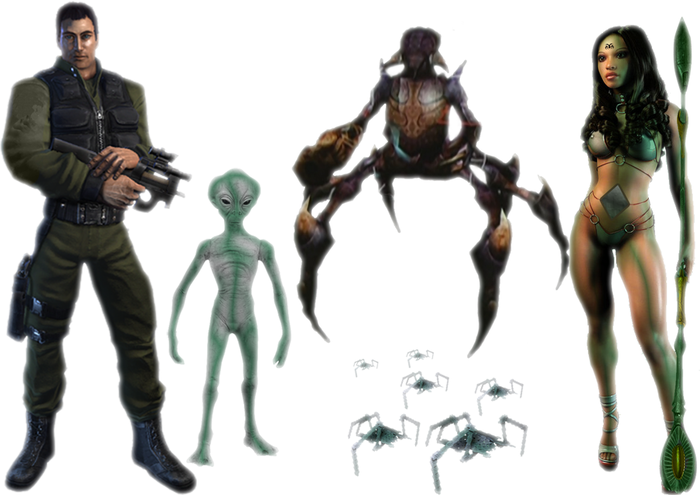 There are lots of great plans for the future of System Lords. First off later on there will be two more races added in. Community ideas will be taken in to decide what these other two races will be. Most likely Asgard won't be added in due to the obvious power issues. I have been planning on bringing Asgard into the game in a different way though where it's a separate game on top of System Lords. So the Asgard would still interact with the players of System Lords just not in a huge war like manner. Also another game added in where humans are doing missions from earth which will work in the same concept as the Asgard game. I'm talking about something that probably has never been done before to my knowledge. It will create a realistic feel to the galaxy having several games all connected together and effecting the galaxy on a grand scale. Lately I've been pondering on an idea to add to System Lords. Which would allow alliances to pull their resources together to execute galaxy events.
Things like blowing planets up and creating black holes which would suck in solar systems around it.
Also have an idea to allow alliances to actually make the entire galaxy go back in time one day or a few hours effecting the entire galaxy. Just enough time to fix a single war strategy mistake.Hopefully we will see these updates in the future. The more successful System Lords is the more expansions can be added onto the game.