Weeklong Deal: 40% off! Finally enjoy a 60 fps gameplay experience even fighting a thousand enemies in a huge and very dense procedural apocalypse!

This v0.85 « Performance Update » will get your computer a huge framerate boost and eradicate all lags : a thousand enemies won't be an issue anymore. Good news: a 40% off Weeklong Deal starts right now on the Steam Store!

Why so much time before a new update? Except the fact that I’m a solo developer with a full-time job, it’s mainly because I needed to switch to new Unity’s version for further development of the game, compatibility issues and of course, performance.

To be short, when a new version is out, Unity automatically updates all your files the best it can, then you game opens with a thousand of red alerts telling you that half of your scripts won’t be able to work like they used to and that your game doesn’t work anymore. Of course, these scripts are connected to all the others, leading to nights of coding and puzzle-resolving. You also need to learn a bit about all new functions to make sure you’ll get the best of Unity. But now, the whole engine is much faster and clean.

To manage more enemies than ever without freezing your screen, every single A.I. decision or action is now executed in a controlled order which avoid overheads.

When you start playing in a procedurally generated world in 3571 The Game, each building, physical object, resource and NPC is already generated too and their respective behaviors are updated every frame, just like the player. This leads to lots of unusual stories, emerging from the random positions and behaviors of each world object at any given time.

For example you may want to explore a huge forest biome, but at its heart a droid dungeon have been generated close to some human headquarters, leading to a terrible war still happening while you'll walk across these cursed woods.

The counterpart of this system is that every A.I. of the world is permanently kept « alive » to be able to react to any small change in their environment. I managed to speed up the whole process by listing all A.I. tasks and executing them in a regular and controlled order.

As the game generates a great and completely random amount of 3D models on a huge 3D terrain, inventing a better global texture management became a useful effort to increase game performance without compressing the HD textures implemented in the precedent version.

Every texture is now part of bigger atlases to reduce draw calls. Most materials now only have diffuse and normal texture layers, for maximum visual effect and minimal processing time. Height maps weren't really adding lots to visuals but could slow down rendering a lot so I decided to remove them. It’s hard to see the difference, except for your frame rate !

The number of light sources generating shadows also becomes an issue. To be able to keep realtime shadowing of the sun I decided to give a the biggest fps-boost of this update by using a different and cheaper way of lighting the world buildings.

The main sun will still project realistic shadows, helping you to measure the time of the day for exemple. This applies too for the lamp carried by the player, vehicle lights, and other special effects. But for the sake of a very, very huge increase in FPS, torchs, lamps, and every light attached to a building will just illuminate in realtime without real shadow projection. However, I increased the subsurface scattering to keep a good visual atmosphere in any case.

After months of testing, profiling and investigating, I discovered lots of inaccurate settings or repetitive functions that could lead to low performance.

I even discovered that some of the props were duplicating each time the player loads a game, which of course is very, very problematic. This have been corrected ; I also discovered dozens of other small inefficiencies, like launching the same function several times… Millisecond by millisecond, the game engine is now faster and cleaner.

When playing at very high resolutions, the main pause user interface may appear really small. I recreated everything in HD to be able to switch for a bigger window if desired.

When the game is set to a resolution wider than 1600 pixels, a small « zoom » icon appears at the top of the screen, allowing you to switch for a much bigger pause window and in-game inventory shortcut bar. Some fonts are also globally bigger, like the AI analysis and the Action tooltip.

At this point I would like to thank my friends for their feedback, and @Maboy on @Steam for his very useful review and suggestions.

Last but not least : watch the new game engine in action in this exclusive 10 mn long gameplay video:

I'm waiting for more player feedback about optimisation. When I'll be sure the engine is perfectly stable and fast in any condition, I'll upload a free demo and start to add the last - but not the least - content before the final release: recruit orders, farming... and hidden secrets.

If you want to support the game and try to create a huge apocalyptic version of the earth, the early access is available on Steam: You'll also be able to challenge the best survivors in the world and see if you can survive longer in the Official Gameplay Mode.

Thanks for reading, see you in the future ! 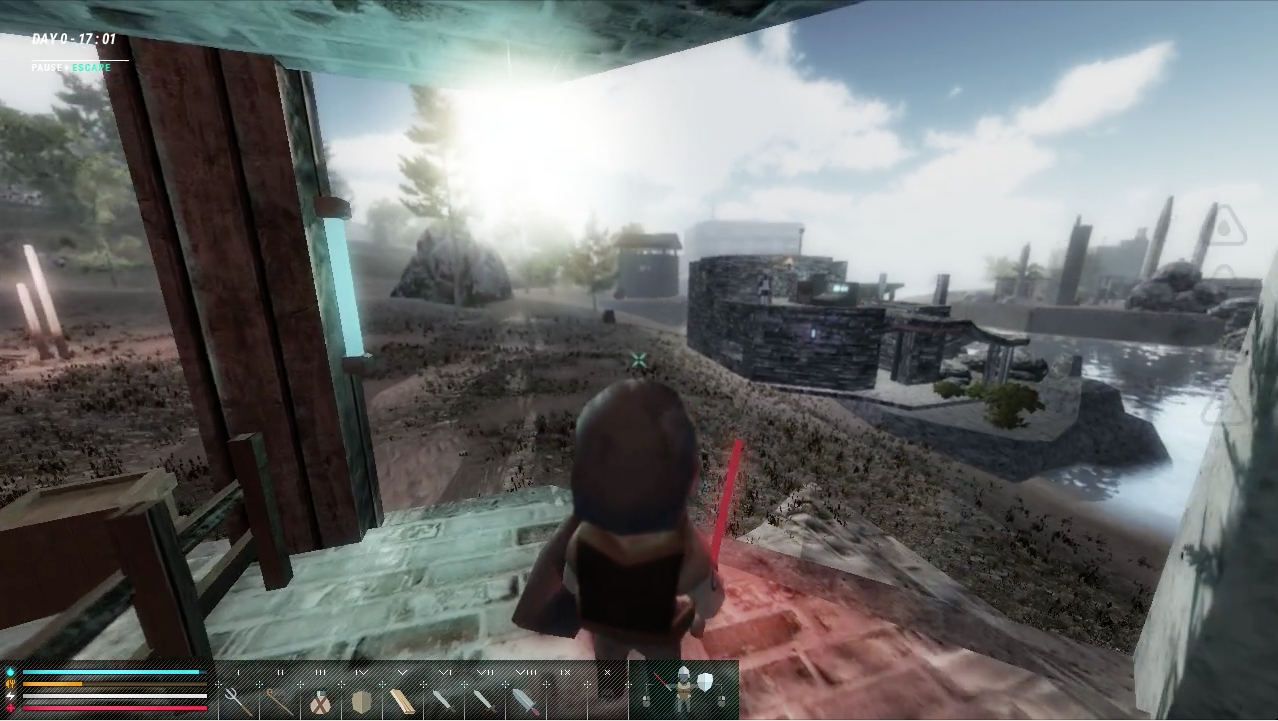