With the new Pixel Shader 3.0 support, we have added some interesting features, like a simple AO (Ambient Occlusion) effect. Also, we were interviewed about the development of 3:00am Dead Time! Read the article, and enjoy the new info.

Hi everyone. This is the seventh dev. diary, and some new features have been added since last week.

Lately, we were noticing that the buildings seemed flat, and a little unnatural due to the lack of a proper shading. The shaders we made with Pixel Shader 2.0 compatibility could not be more complex, so we decided, as you know now, to switch to Pixel Shader 3.0, so we could use more advanced features, and make the materials more complex.

This week, besides finishing the graveyard scene (It is official! the scene is now finished!), we also added some nice touches to improve the overall quality of the game. We will cover here just the first one : baked Ambient Occlusion.


If you don't know what it is the Ambient Occlusion (from here AO), let us give you a simple definition : it is a shading calculation, which tries to represent the shadows that are product from the light being occluded (interfered) between two surfaces that are close one of the other.

This effect allows a realistic rendering, because it simulates a natural, diffuse and smooth lighting, blending correctly the geometry of a level. Of course, if it is done in real-time using a post-process effect it has more quality, but at the same time, it is slower (and requires Unity Pro so...)

We have baked the AO into the geometry, and added a few lines to our shaders in order to control better the shadows of the object. You can see here some results : 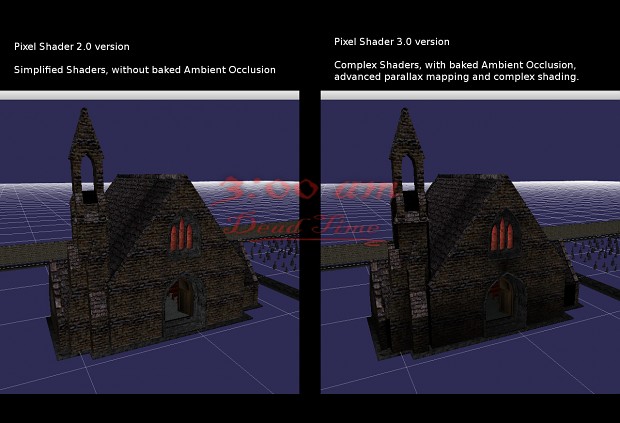 A side by side comparison between the church without (left) and with (right) Ambient Occlusion. As you can notice, the right one has better quality, shows a smooth and realistic shader and avoids the flat/floating effect, simply adding some proper shadowing. If you can't see the difference yet, below are more pics with the object rendered in white.

This is the church without baked AO. As you can see, the shading is more simple, and just averages a basic general shadin without taking into acount the shadows the object produces. It is rendered with Pixel Shader 2.0.

Here is the same church, with the baked AO. With a special software, we calculated the AO for a simple light setup, and stored the results just for the shading. With the default Unity baked AO, we need to bake also a lightmap, meaning that the shading will render at the same time that a static light (this means, we have this effect but the church must be seen as if it was daytime). This image was rendered using Pixel Shader 3.0 shaders.

Of course, we are polishing the results so everything looks great for Beta 0.2. Also, as I said at the beggining, we have finished the graveyard scene, and are now working with the last details of the AI for the NPC and the paranormal beings/pheomena.

Here are two little pics of the graveyard :

2.-Other News : Irreverent Software's member interviewed about 3:00am Dead Time


Also, we have a BIG new to share with all of you :
This week, an interview made by Ozzie Mejia for the Indie Games Channel was published. He interviewed a member of the team, in order to know more about 3:00am Dead Time. It offers another look at the game we are developing, and describes some of our plans for the game.

We are really glad to see that this project is having success, and we ask you to help us spread the word about it, in order to raise money for the tools we need to finish the game with the greatest quality possible, and make this project bigger and better. With your help, 3:00am Dead Time can succeed at being the most complete terror experience for a PC. We are thankful for your support and interst in our game, it gives us the confidence to continue with this hard work.

Here it is a little extract from the interview :

Horror has rapidly become a resurgent genre in recent years, whether it’s rooted in action or in the human psyche. Irreverent Software is looking to take the genre somewhere more based in reality — reality shows, that is.

Taking cues from shows like Ghost Hunters, Irreverent looks to bring a new kind of terror to gaming with 3:00am Dead Time.

“We have always been gamers,” said Irreverent programmer J. “Frasier” Pinal. “But we saw that one of our favorite genres, the terror, was losing its essence in the recent years, because most modern games relate terror with zombies or lots of blood and gore. I think that everyone has at least one paranormal or inexplicable experience to tell. We wanted to make a terror game as real the paranormal phenomena can be. We wanted to make a game with stories and experiences the player could relate to — things that could happen to anyone. There wasn’t any game that tried to capture that feeling, the tension and anxiety we feel when, for example, we watch a YouTube home video of a paranormal phenomenon, or when we experience something weird or scary.”...

Read the full interview on the Indie Games Channel website.

Thank you very much for your interest in our game, and remember that we are making many important updates lately, so there are some big news, and some interesting videos you will see soon.