Build 238 and 239 Hot fix Released this week. Some more from a new map coming soon this month of Feb! and a brand new website.

A free new addition to existing Natural Selection 2 maps, Descent, is scheduled for late February. This new map, a space station, will take pride of place amongst all the shiny new stuff. Descent Station orbits the planet upon which every other NS2 map is located. Last week, we showed off that view.
This week, a little more is revealed: 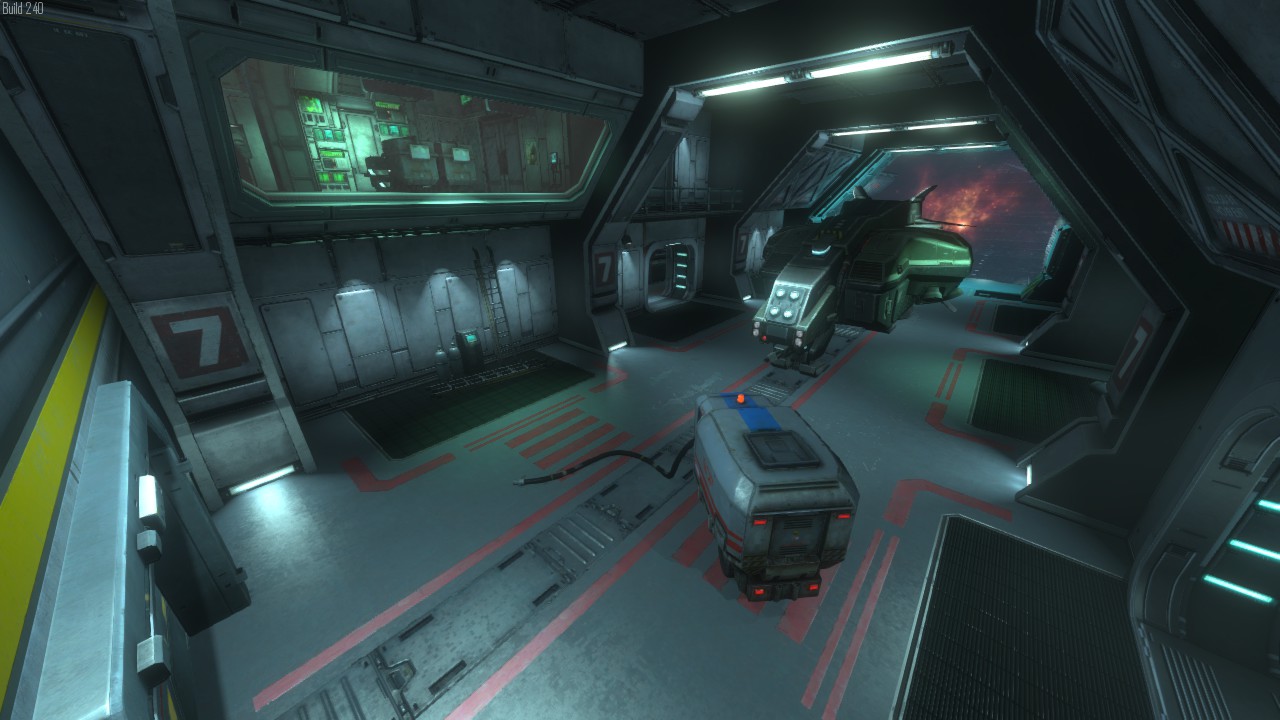 This is the Shuttle Bay. The TSF Dropship sits ensconced between structural supports, with a control room looking down on the space. This part of the map is very important, because it ties it into existing NS2 maps. In times of peace this bay would have provided harbour for all manner of human spacecraft. At war with the Kharaa, the Dropship delivering TSF marines makes an appearance in various areas around all these maps: 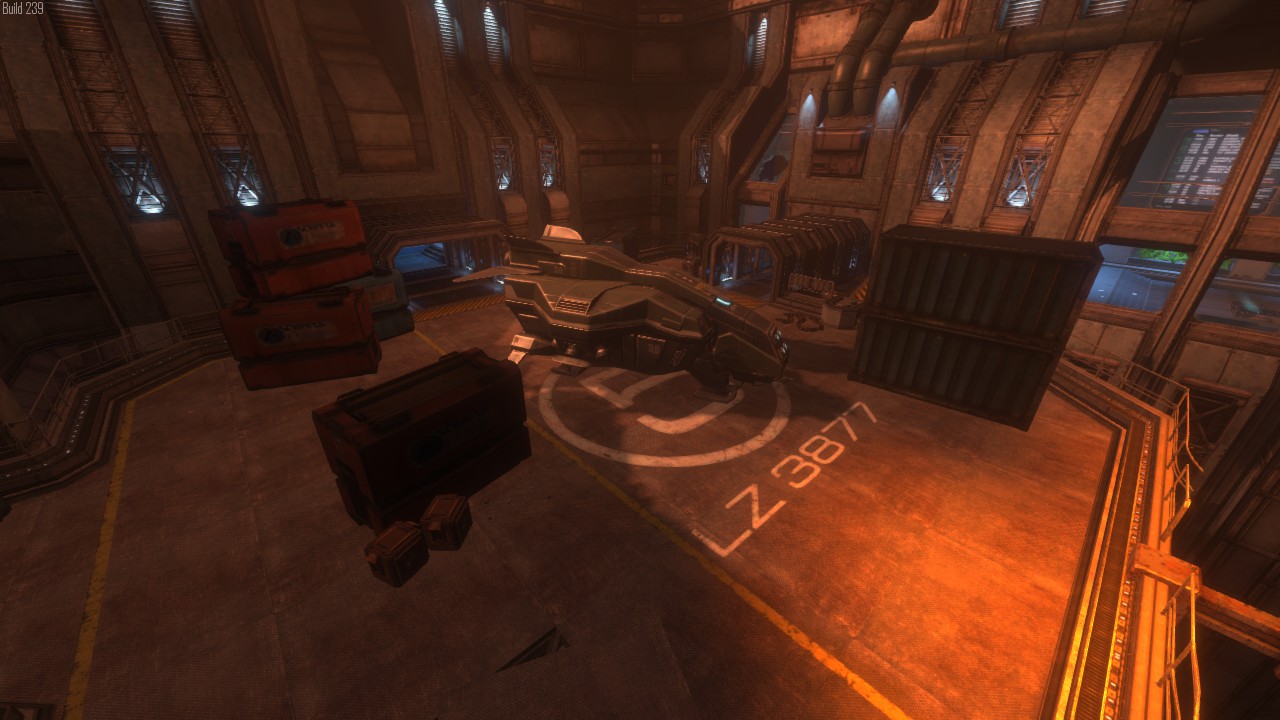 Landing areas of one kind or another a present throughout the facilities in which the Kharaa and Frontiersmen fight. Docking provides the most prominent example, Landing Zone 3877 being unique amongst existing maps in having the Dropship part of the playable area. The amenities and accommodation present throughout Docking hint that it would be the primary landing point for crews and personnel flying to the surface from Descent Station. 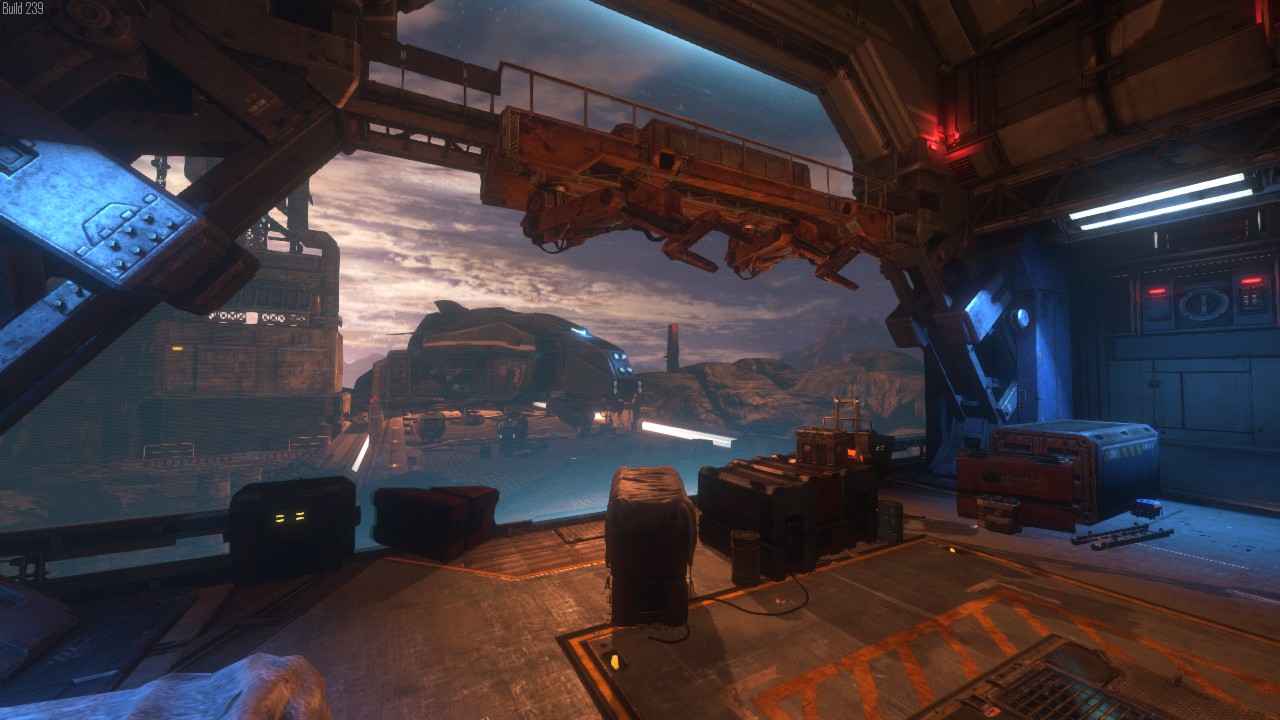 If Docking is designed to handle people, Veil’s dropship landing zone is surely more welcoming of goods and supplies. The Cargo Tech Point is littered with shipping containers placed by overhead cranes. 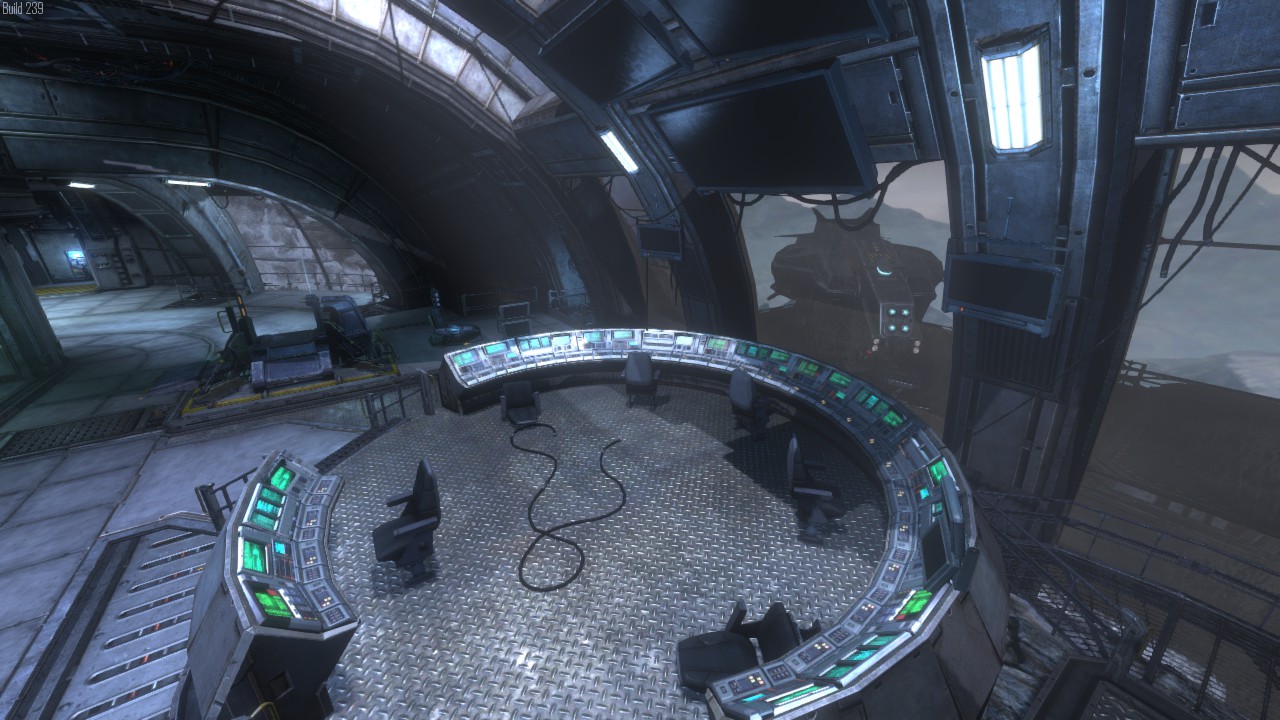 The Summit landing zone is often overlooked: The Dropship is visible through the flight control windows. Summit lacks cargo receiving equipment, an enclosed hanger, and crew amenities. Its remote mountain top location implies an outpost without the comforts of some of the larger facilities, and crew members would have to walk through the freezing cold from spacecraft to outer doors.

Descent is coming soon, and when it does the Shuttle Bay will provide a crucial link to the rest of the NS2 world. Marines, get your act together and kick these Kharaa out so that normal shuttle operations can resume!

Check out the fresh digs! UnknownWorlds.com, and NS2′s home, have a new look! Read more about that here. Now, Build 238 is almost here!

Identifying NS2 versions by Build number has benefits and drawbacks. On the one hand, it’s fun to know that this is going to be the 238th version of NS2 (The initial builds being protoplasmic versions of the Source Development Kit). On the other hand, how many versions have there been since launch? To find out, we need high-order mathematics. The launch build was 227, so 238-227, carry the four… This is the 11th build since launch!

Build 238 was a good, solid build, but it was not quite good enough. A nasty bug slipped through, allowing Aliens to evolve all traits at once. Naturally, Brian woke up in a fit of murderous bug-rage. We tried to control him, but by lunchtime he had already punched through a concrete wall, and created a new build. After an afternoon of testing, we present you Build 239!
There is no changelog for this one, as it is really tiny. Here are the three lonely components:

That last one is a present from Steve, and is actually quite significant. Animations is Spark have historically been absolute memory hogs. The optimisations Steve has introduced have reduced their appetites. This won’t result in more FPS for most people, but will prevent crashes for some people who were running out of RAM on their GPUs.In lieu of a patch video, here is a great fun playtest game played on Docking. There is lots of high-level Marine combat in it, especially around the relatively new Departures and East Wing areas:

It has now been three months since Natural Selection 2 v1.0. Since launch, there have been ten updates, and today we present the eleventh! Build 238 is a ‘maintenance build.’ It is focused on improving what is already in the game, rather than adding lots of new content. We are planning a huge ‘content build’ for mid/late February, which will contain lots of goodies such as the new map Descent. However, several small features have snuck in! Check out this video for some of the highlights:

Games will no longer start until both sides have a commander. This eliminates a common problem in public games, where one team would be thirty seconds or so behind the other. You can still rush by jumping out of the Hive or Command Station the moment the game starts. 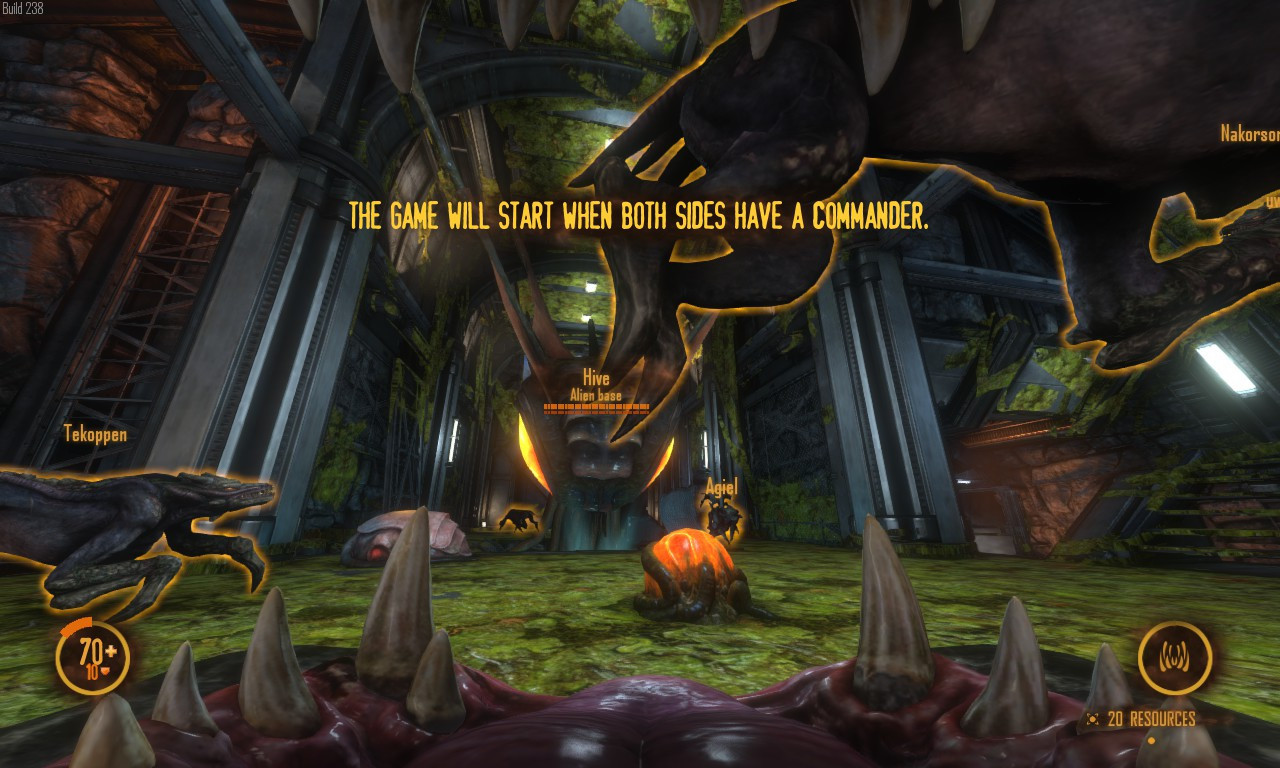 Shotguns will feel very different in this patch. They have a large number of pellets, each doing less damage than they used to. The original shotgun had an asymmetrical randomised spread, that spread is now symmetrical. This will reduce instances of players feeling like they ‘should have’ hit and killed a target. You can see the new spread against the wall in the image below: 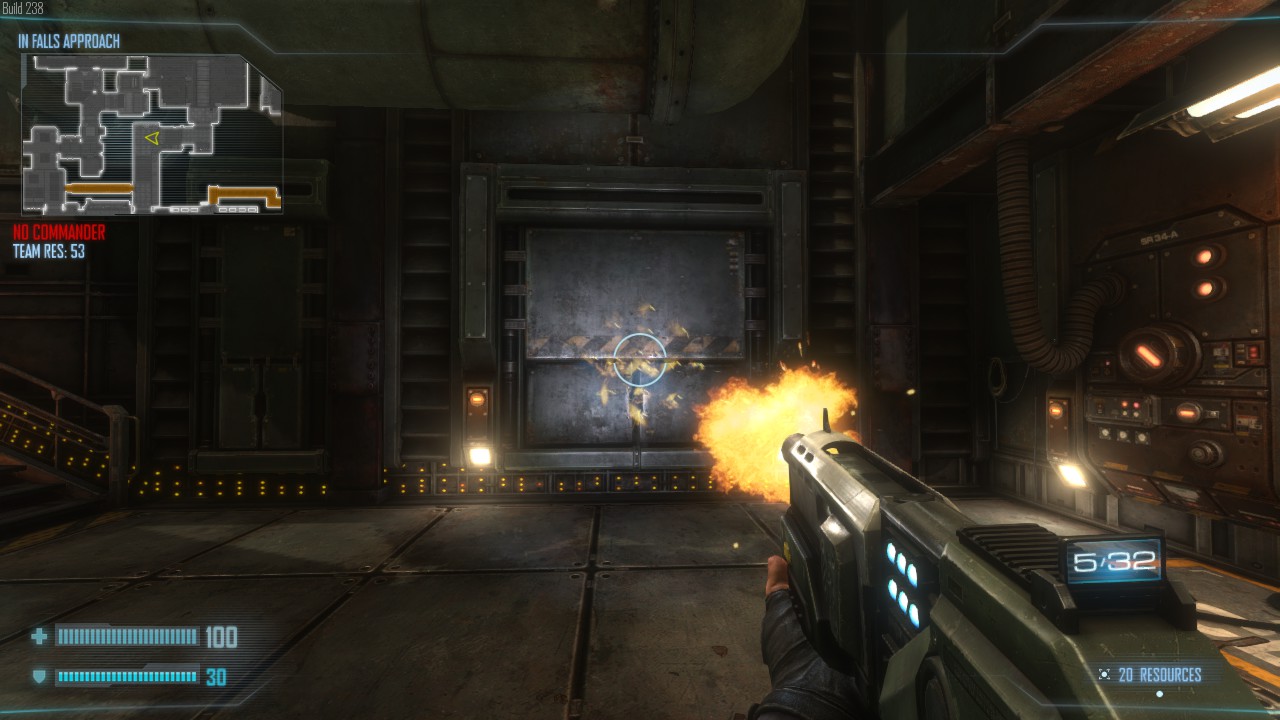 Here is a full list of changes in the build: