Did you know there are over ONE HUNDRED MILLION combinations of bosses possible? Neither did we, until we did the math. Today we are taking a look at the process of polishing up one of the many boss weapons.

Posted by DonleyTimeFoundation on Jun 20th, 2016

Welcome to the latest Boss 101 update and thank you for stopping by!

Polishing a Weapon in Boss 101

Today we are taking a look at the process of polishing up one of the many boss weapons. As we’ve mentioned there are a lot of bosses and you will be able to create your own boss to battle. In game you use the Make A Boss to assemble a boss from parts available. The specifics of how this is done depends on the game mode you are choosing but needless to say there are a lot of possible breakdowns.

Here is a look at a debug breakdown of just a FEW bosses you might see.

Did you know there are over ONE HUNDRED MILLION combinations of bosses possible? Neither did we, until we did the math.

Despite all the combinations we create bosses as grouped units and allow them to be broken up. Here we have the Tiger Boss as a complete unit. Note the weapon on top is his dreaded poison gas weapon.

From the debug screen…

So initially he sprayed a gassy cloud from his back onto the player. We have below a VERY early version of the weapon. You can see the gas cloud looks quite a bit different from a lot of the regular pixel art in the game.

Well, that look stood out a little too much so we did tweaking and created pixel art for the gas. Ended up with something looking like this… 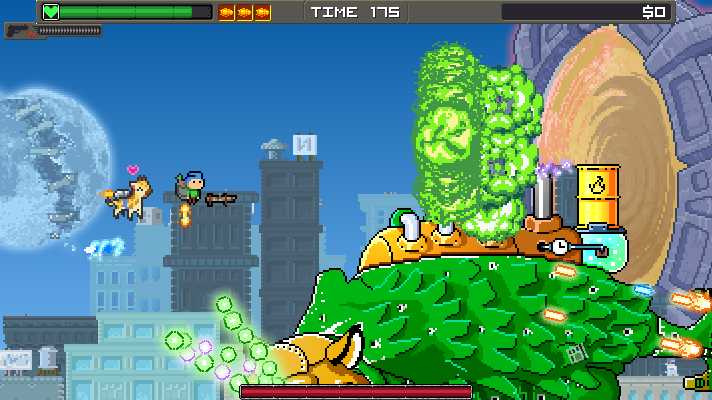 Ok – that is a little bit better but there was still a problem and that was the gas firing out of the weapon. This make some BASIC sense but the issue was gameplay and we were noticing the player was normally out of range of the cloud unless we made it linger for a very long time or move somewhat fast. That wasn’t the direction we wanted to go.

Inspiration soon struck though – we had ANOTHER boss, the T-Rex whose weapon created fire breath to blast from any bosses mouth. Kind of like a Godzilla thing. Here it is in action. The main flames coming from the T-Rex mouth here are being generated by his back weapon.

Well, it wasn’t a big jump to take the idea there and re-work the Tiger weapon to fire a gas cloud from the mouth of a boss like so.

Sample of the gas weapon update 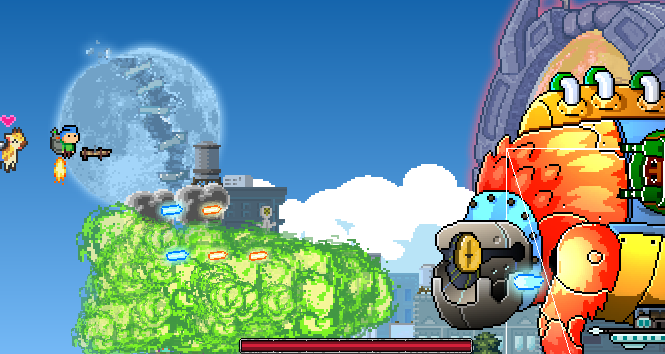 YES! Once again we’re peeling back the curtain for you! These decisions may seem obvious hindsight but sometimes these thing elude you until you see it all in action. Hope you enjoyed this look.

TIGForums – Devlog Gold of 2015 Results - We got a Favorite Devblog Award!

Did you know the Boss 101 Dev Log placed third in the FAVORITE PROJECT category? We did! Thanks to you and your support. Check out our TIGForums Devlog here: Boss 101 Dev Log

Screenshot of the Day

As always – remember to live your dreams and thank you for your support!