Today we are talking about one tough mo-fo, the Train Boss. He is not one, not two but multiple parts and weapons you battle as you make way from the caboose to the front of the train.

Posted by DonleyTimeFoundation on Dec 21st, 2015

Welcome to the weekly Boss 101 update!

Today we are talking about one bad ass mo-fo, the Train Boss. This dude is found on one of the later planets and he is not one, not two but multiple parts and weapons you battle as you make way from the caboose to the front of the train.

Though he shares some of the base abilities of the earlier bosses (flames, lasers and ultra shots) he also has a new ones you haven’t seen. He has a train car which fires balls of plasma which can destroy YOUR shots. What the heck!?! Don’t fret, you have counters for all his tricks but you do have to be careful. This dude requires patience and a steady hand. Blasting away might not get you too far. Let’s look at some of the cars and the process behind the boss.

First off – he’s a train. HAAAAA!!! YOU KNOW THAT! Well, we had to create a track system and when I say “we” I mean Joshua, our uber programmer. I think the conversation went something like this

Me: Hey, what about a train boss thing?
Joshua: Yeah, we can do that.
Me: Man, we can have it race across the bottom of the screen all awesome.
Joshua: yah, totally. It will look cool.
Me: Dang, wouldn’t it be cool if the track actually had hills and stuff the train could move up and down on?
Joshua: I thought that is what we were just talking about. I was going to make that happen.
Me: WHAT!?! You mean you can code all that train shiz to work? Like a real train on sloping hills.
Joshua: Oh yah, S’easy.

Welp, guess what – he sure made it look easy. Once those tracks were in we started creating the cars and the play space you will fight in. Check out JUST A FEW of the awesome possum things we have.

Mine Layer Car – this guy will teleport in mines to block your path. Not something you want to hang around for a long time. Be sure to take this clown down quick. 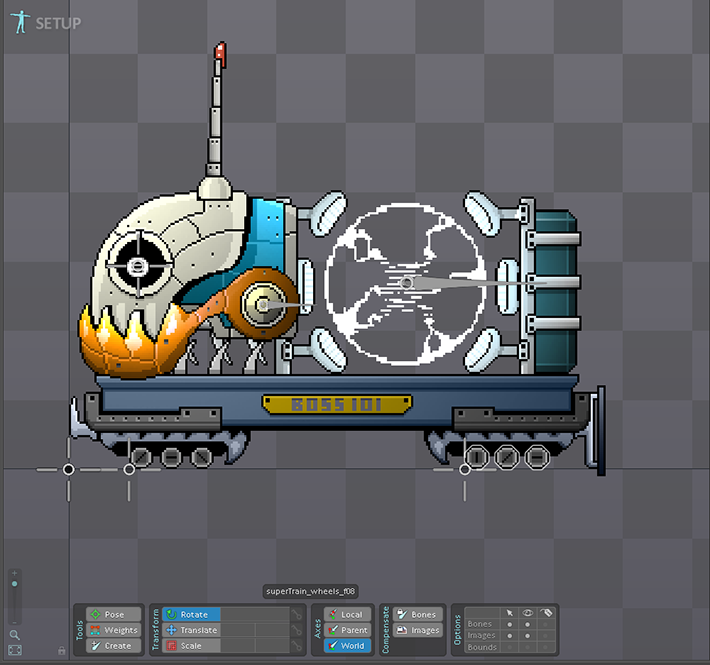 Mortar Car – Lobs one of the biggest shells in the game at you. Sure you can shot it but if you’re caught in the explosions don’t blame us. We warned you. 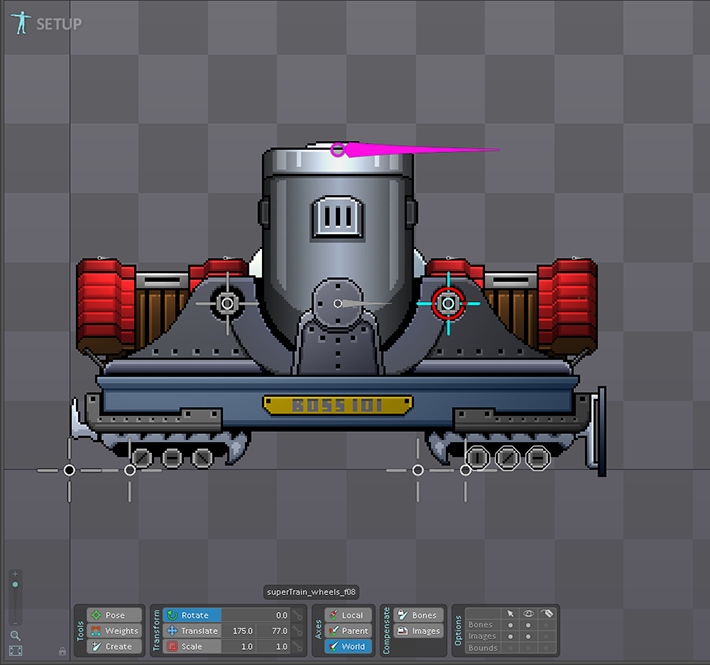 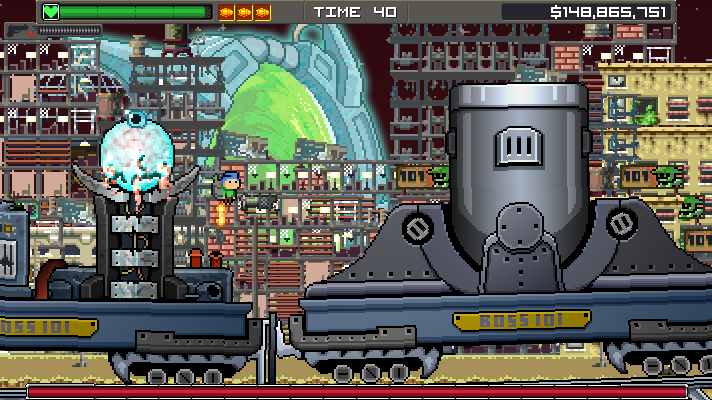 Flak Cannon Car – designed to keep you in place and pound you out of the sky. He has to take a break between blasts so make the most of the time you get. 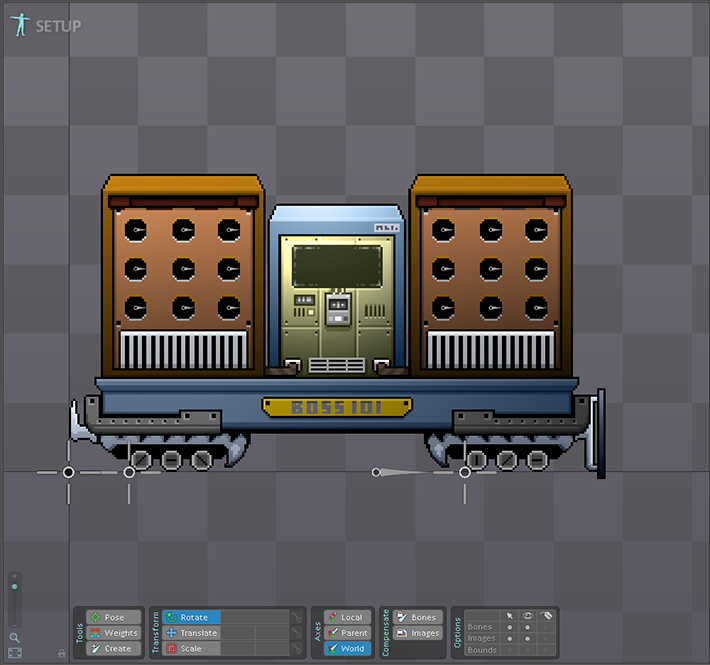 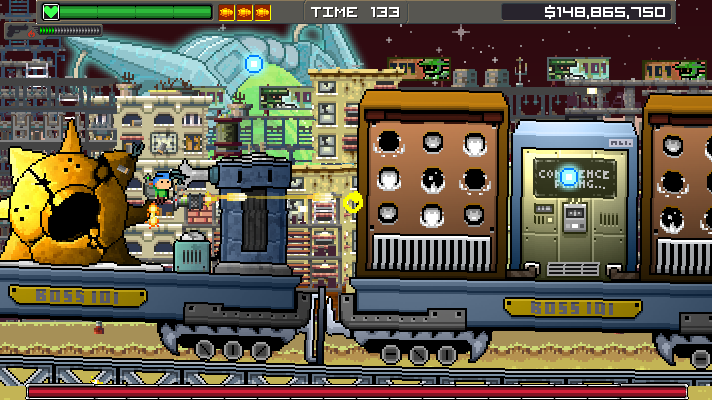 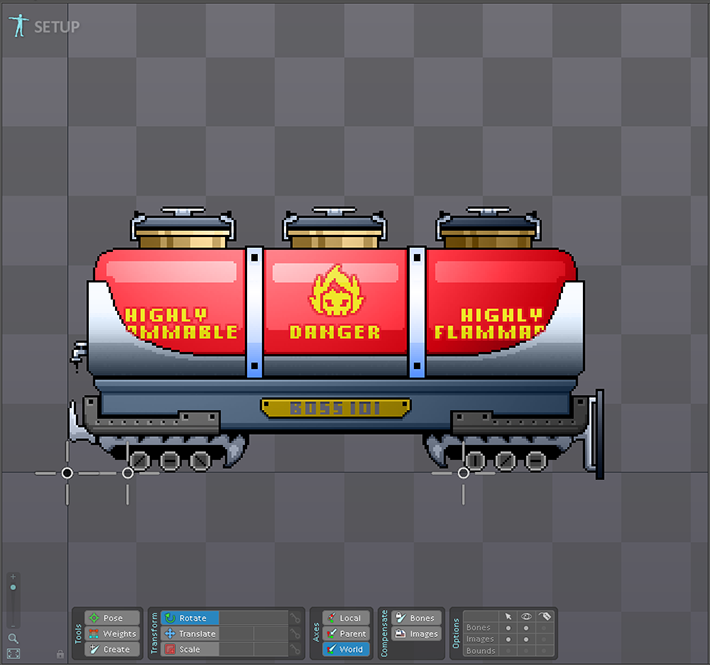 Some early work on the process of the train boss and how we do art in general!

Hope you enjoyed that peek at the latest and come back for more. We do regular updates and intend to keep this up until the game ships AND BEYOND!!! YES!

And remember – live your dreams!

Hope you are all enjoying the updates! We're heading into the crucial polish phase so all your feedback is mos-def appreciated!