Since you use your main gun so much we wanted to make it worthwhile and not go out of style. You might be asking yourself, “Self, how did they accomplish that?” Good question!

Posted by DonleyTimeFoundation on Dec 14th, 2015

Welcome to the weekly Boss 101 Update!

Max’s Chain Gun aka your MAIN GUN. This is the gun you use throughout the game and always have with you. Of course you have an alternate gun you can equip but the chain gun stays. It’s your go-to item for battling bosses.

Well, since we are making it the main gun we wanted to make it worthwhile to use and not go out of style. You might be asking yourself, “Self, how did they accomplish that?” Good question!

We give you the ability to upgrade the gun as you acquire bounty money. The gun starts out as a rusty old beater but you can get it into “whoop-ass” territory soon enough. Heck, pair it with the correct hat to boost its power and you will be rocking the bosses to the floor in no time.

When we started development we didn’t originally have this many levels of chain gun upgrades. As we played and progressed over the year we looked at the player guns and specifically this one. Since it was used so much we felt it needed to have some oomph and after checking out the bosses, intended gameplay and progression we came up with the current upgrades. Make no mistake the main question we ask of anything put in the game is “Is this fun?”

If I had to break down the thought process in the game features I would say this:

“What is this trying to do?”
“Is it fun?”
“Does it succeed at the above?” (this question is asked from the perspective of a fan who has paid for Boss 101)

The more reasons and yes answers for the above the better. We love the idea of cool for cool’s sake but at the same time we think it is even more awesome if something can be cool AND make some sort of sense in the game world and to the player.

We CANNOT wait till you are holding a controller and player Boss 101 yourself.

Check out some shots of the chain gun in action:

Your starting gun (there is a joke in there somewhere)

Will you wield the golden Level 10 gun?!!?!? Reach for the sky and achieve it I say! 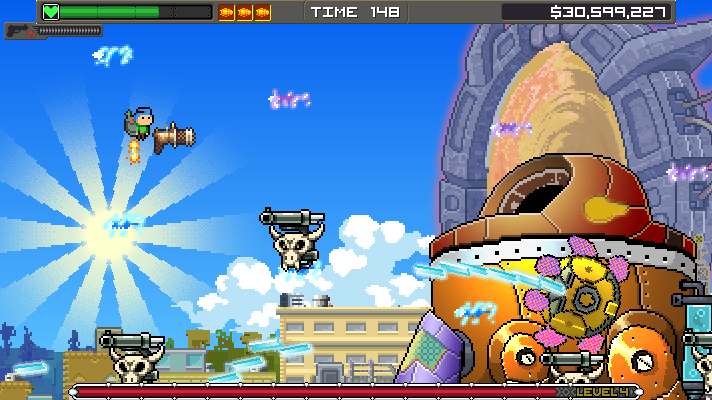 Boss 101 Screenshot - the gophers and their marvelous flying machines. Catch 'em all when they fly around the levels.

Remember folks – live your dreams, no one else will!