This week we are introducing the Gopher Science Team, Professor, Roger, Agent 5, Cosmo and Jay Henry. Also - watch the bosses try to steal our sun.

Posted by DonleyTimeFoundation on Aug 4th, 2015

Hello and welcome back to the latest in Boss 101 news.

This week we are talking about your friends from the Boss 101 Command Center. The Gopher Science Team! That is correct, you have your own science team to help you develop new weapons and ideas in your fight against the bosses.

The idea is we want to give the player (you) a better sense of the activities and work that are going on to support you and your efforts. You didn’t just stumble into this awesome Command Center. You built it along with your friends! You added all the cool tech and you are using that tech to create new ideas to help bring you out ahead. Of course, sometimes the tech gets a little ahead of you and guys like STEVE, ROB and the Professor help reel it back in.

Let’s meet the team shall we?

Professor – arguably the leader of the group and head of the team. He helps develop the main technology in the Command Center and is responsible for taking your Boss 101 winnings and turning it into new weapons.

Roger – the professor’s right hand gopher. He’s helping with all the lab preparations and organization.

Agent 5 – when you need secret parts for the new gun or hat. Agent 5 will get it for you.

Cosmo – She works with professor to implement the new gun technology.

Jay Henry – the hardest working Gopher in the show biz or gopher biz. He is in charge of all the construction projects in the Command center.

Here’s a quick meet the cast to show you a bit of who’s who in action!

Also – we have ROB who works with the science team to develop new tech for you. He’s another jetpack like STEVE but it’s safe to say he’s not quite as sarcastic though. ROB brings you news and updates and tends to spend a lot of time in the basement working on his secret project which he one day may share with the team.

So one thing Boss 101 is up to is confiscating local suns for his own nefarious purposes. Here we have the guys fighting as Boss 101 and his team look to round up another star. Don’t let ‘em take ole Sol! It’s pretty important to everyone on Earth wouldn’t you say? 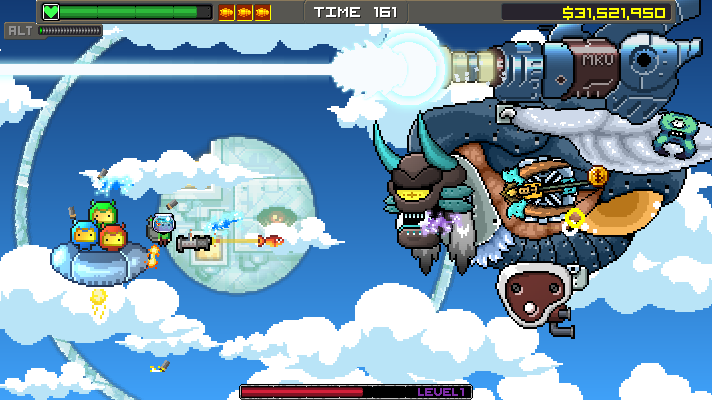 Don't forget when all else fails there are melee weapons you can bash the baddies with! Check out the awesome wrench action.

Thanks for stopping by and much more to come next week with news about the cinematics and the latest in gameplay and tunes!

See you then and live your dreams!

Loving boss 101 so far! Its style and gameplay is so unique and fun to play! Keep up the good work.

Thank you so much! Really appreciate the kind words and we will keep on keeping on!

Looks cooler and cooler with every update!;-)

Aw - thank you!!!! It's really a super fun project. It's great to hear you and others are liking what you see! Appreciate it!