With the first batch of weapons nearing completion, a new map under way and the second character design finished- we've gotten off to a great start for 2013.

Lets kick things off with Kieran's Archer design! After weeks of slaving away, we're finally able to show off some more character class'. You can see that we're starting to explore the different color schemes for each side- this red and black version is very reminiscent of the 'Mason Order' from Chivalry.
You can also see the amazing design work that’s gone into the archers quiver and bow! 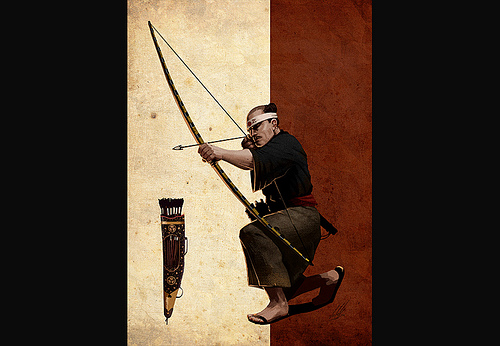 Next we're happy to present the first part of the Bushido armory. Each of the class' now has their primary and secondary weapon modeled. I haven't finished the textures on all of them yet, but expect another textured render soon. 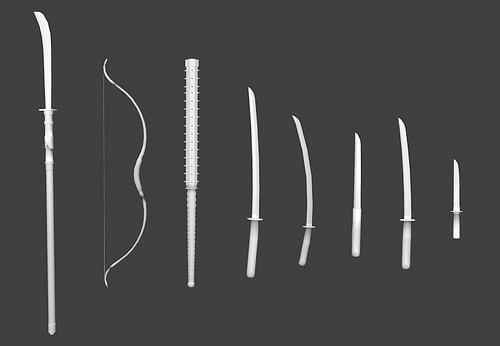 For anyone interested, the weapons are (from left to right):
Naginata, Han-kyu bow, Tetsubo, Katana
Tachi, Chokuto, Wakizashi, Tanto

Stay tuned for more updates, including the next character class and some more weapon renders. We'll also start teasing you with some images from our first map!

You have a lot of support. Keep up the wonderful work. We are very much looking forward to playing this. Very excited!

Awesome! Thanks for all the support guys we really appreciate it!

Looks great! Can't wait to see Bushido in Chivalry... You have all my :D's!

Yeah congrats on your progress so far. I am looking forward to playing in some more maps for the game. I remember reading 47 Ronin or 47 samurai for school - I will be thinking of this when I play.

Looks AWESOME so far, but will you also be making map(s) to accompany the weapons and classes?

This looks very promising and nice!
I always was thinking about a Shogun warfare in chivalry medieval warfare!
And now i've found this. Ill keep an eye on this project.
Good luck and hopefully it will be released whenever it's finished!
Arigato!

Thanks for the support!!