Greetings, indieDB! Well, a new year, a new update. 2012 was very long and a lot of hard work got put into the game. Here's a recap of everything that happened last year:

We spent the beginning of the year cranking out updates, getting the game to our 0.3.1 goal before PAX East hit. We had a very small booth at PAX East, where hundreds of people played the game or at least watched the trailer. By the end of the convention, we had dozens of pages of notes and a feeling in our gut that we had more work cut out for us than we had planned. 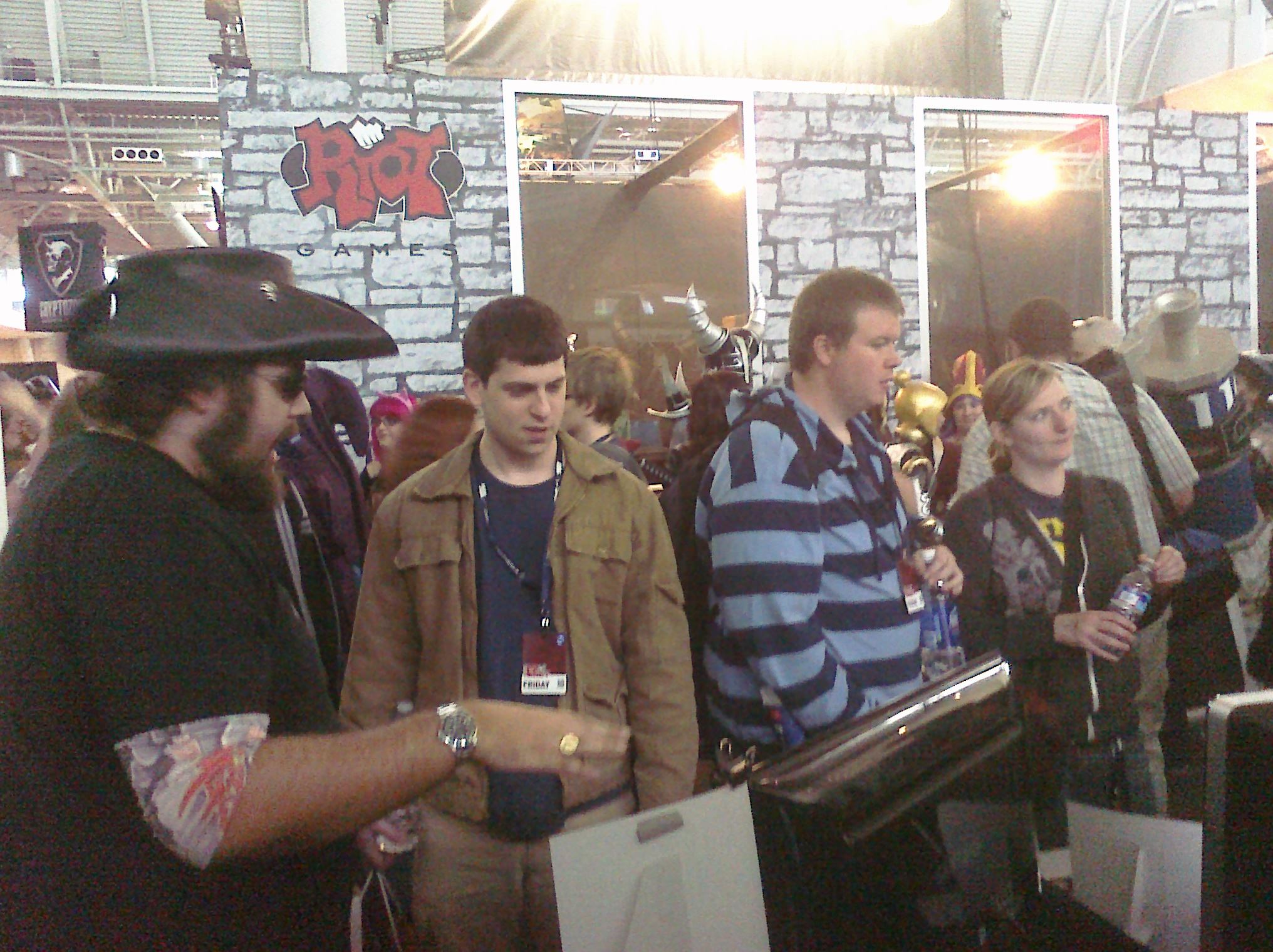 The rest of 2012 was spent revamping several aspects of Children of Liberty, with specific focuses on stealth, story, and building up our asset base. In order to even begin approaching the notes we had taken at PAX, our entire player control code had to be scrapped and rewritten in order to better accommodate the gameplay. For example, when the player takes cover they move on the Z-Axis, despite the fact that the gameplay itself takes place on X and Y axes, so we had to be able to account for varying distances to the walls, how far to pop out when you knock out a Redcoat, making sure you don't fall off the track when you come out of cover, etc. There are thousands of lines of new code devoted just to the player, and said code can also be used to control AI. 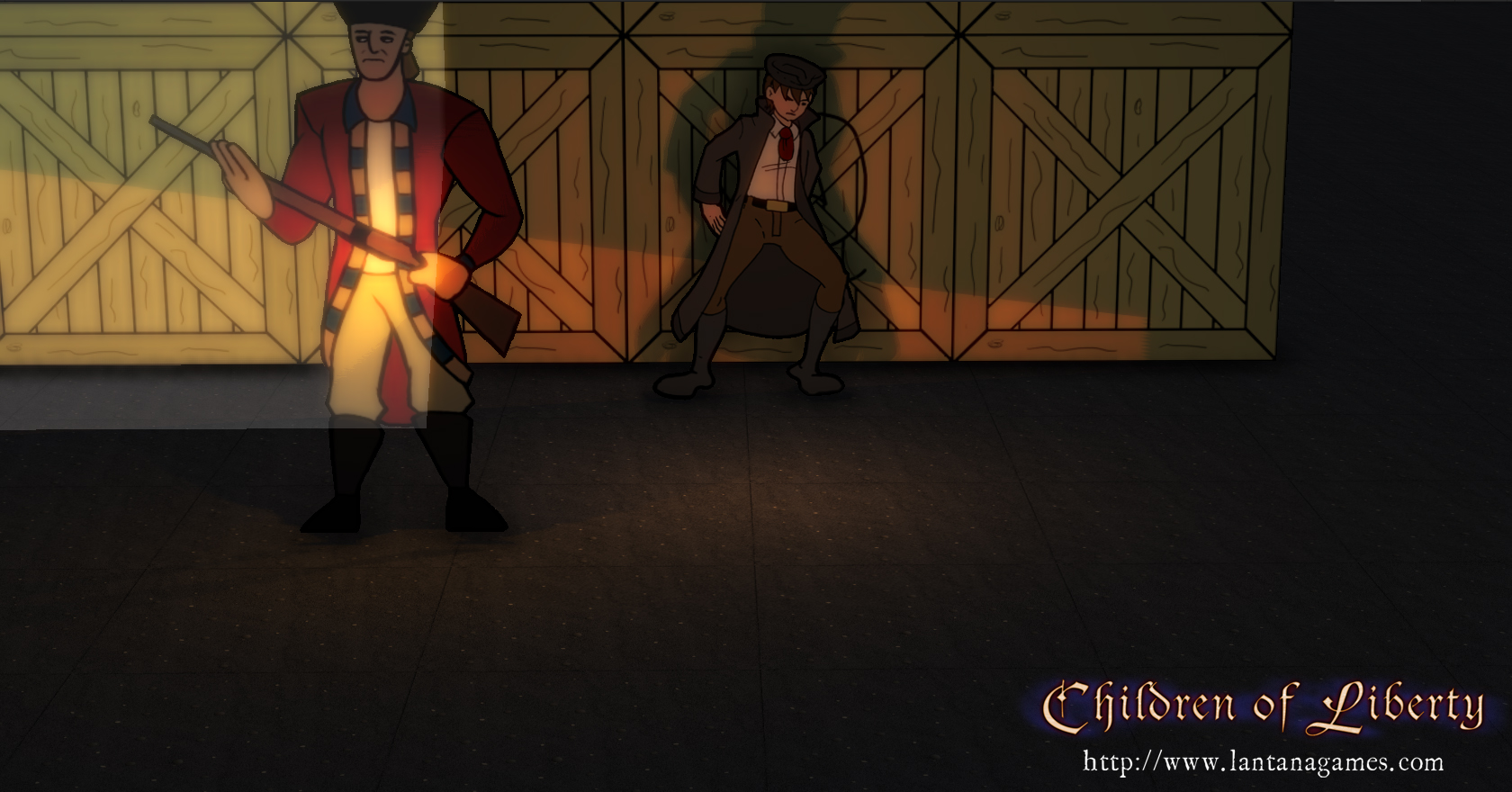 The biggest comment we got from last year's PAX East was that the stealth did not feel prominent enough. In order to fix this, we have made enemies more deadly not just in terms of their attack power, but also in terms of how aware they are to your presence. You can now see their vision cones, which change color depending on their attitude (neutral [white], startled [yellow], or angry [red]). They are not only aware of you, but also of other enemies, and will wake them up if they see they've been knocked out (you can indeed use downed enemies to lure other enemies to you for a second takedown and, yes, it feels awesome).

We've also added some mechanics to the player's repertoire which not only enhance the stealth but take advantage of the 3D environment, the majority of which are based on the corners between tracks. When in cover, if you shuffle over to a corner, you can peek around into the next track to see what threats are coming. There is also a corner-takedown ability we've added in which lets you not only turn the corner, but instantly takedown an enemy in range. When there are two corner points near each other (ie across a hallway or some other track that runs between your current track) you can dash between them, staying out of sight of enemies. A new set of UI icons has been created to show when each of these abilities can be used (personalized for each kid, of course), and there are some other things we're doing with the UI that I can't talk about just yet. Once it's working, I'll share. 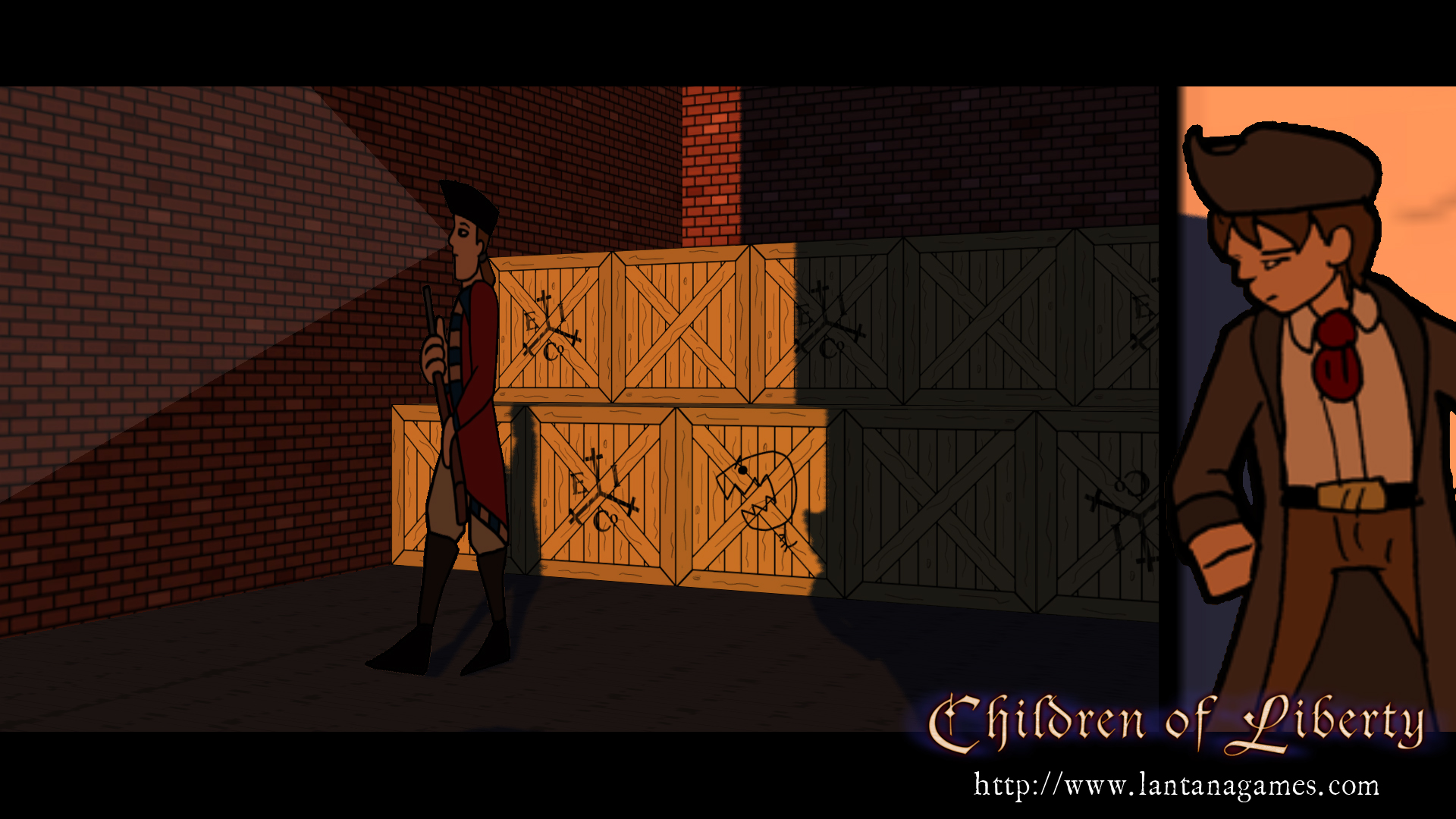 In terms of story, we've worked hard to maintain the focus on historical accuracy that we feel makes this game unique. Much of the dialog is taken from direct sources, such as letters and journal entries. We've put together a killer cast, and some of their work can be heard in our new trailer:


Finally, the assets. While the game itself was in a state of... not quite limbo but also not quite working, we pressed on with other aspects of the game, especially in the art department. In all, we currently have over 2,000 frames of hand drawn sprite animation, with more on the way. We also have about 25 high resolution character portraits, dozens of new 3D models and a few hundred environmental textures.

Overall, 2012 was a productive, but extremely difficult year. One of the oldest members of the team, Sam, left Boston to pursue other interests. The lack of updates meant lack of press coverage, which in turn meant the game became difficult to discover. We trickled out whatever screenshots we could, but screenshots, videos, and especially updates were difficult to do with the game not being in working condition. 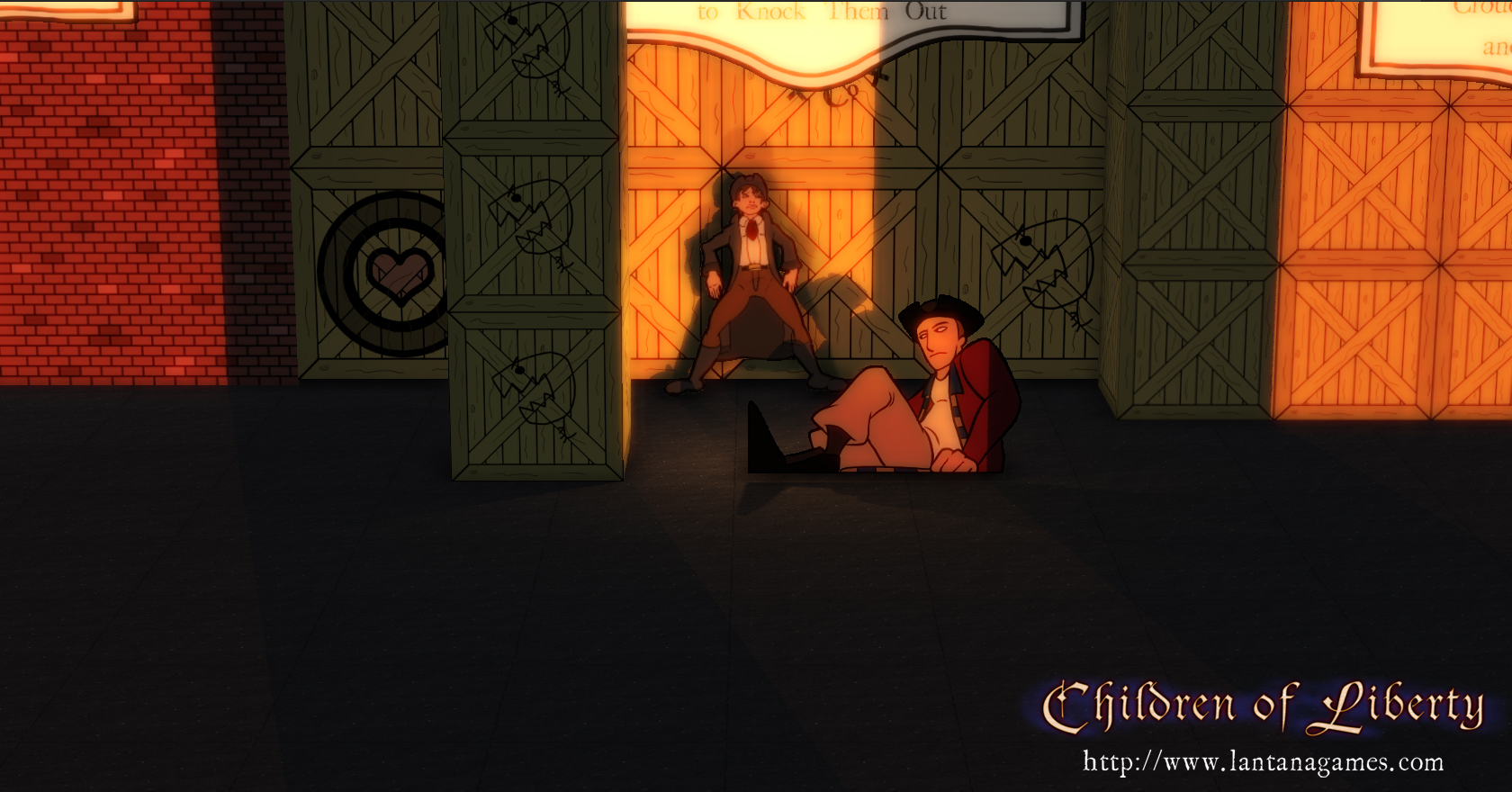 The update is moving along though, and we fully intend to release this one and one more before PAX East hits again. A big thanks to all our backers, without whom we never would have been able to even afford our Unity Pro licenses. As of right now, we continue to press on, despite the fact that our funds are finally starting to dry up (though our only sources for funding have been Kickstarter and our families). We will see where 2013 takes us.

If you are attending PAX East, we'll be in booth 183, right near the south entrance (think coat check/escalators). Our booth is quite big this time, so anyone who had trouble finding us before probably won't this time around. Here's our current booth mockup: 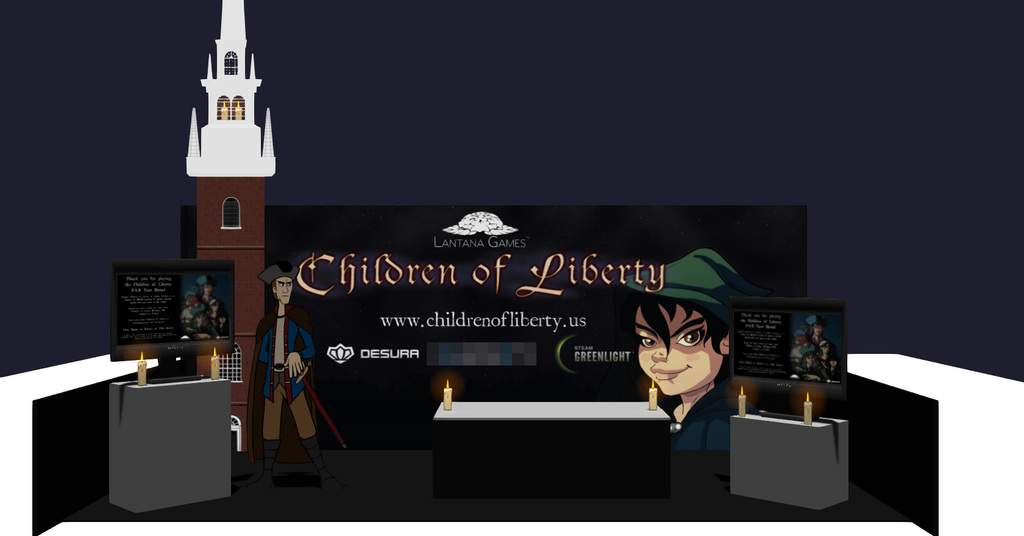 Don't forget to show your support on our Steam Greenlight page if you haven't!Well, I think that's all there is to know at the moment.