A few of the highlights:

The input system module in charge of handling keys was improved to support multiple keypresses in unison, as well as better support for repeat-triggered key events.

An NPC and player targeting system was finally implemented. Players may target characters by simply clicking on them, however NPCs with quests or dialog cannot be targeted in this way currently. NPCs and non-party player characters can also be targeted by pressing the TAB key. This will cycle through all NPCs in the general vicinity of the player. Likewise, players can cycle through their party members by pressing the '`' key. 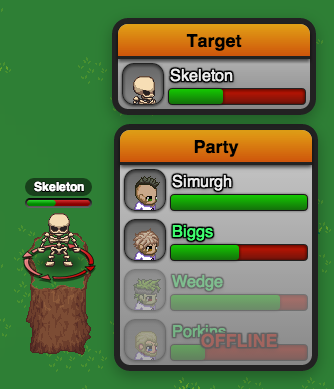 Combat received a complete redesign this release cycle. Combat functions similar to how consuming food works: via pressing the assigned action button / hotkey. Melee attacks are treated as a directed area of effect centered around the player. More damage is typically applied to the characters in front of the player, but this can vary from weapon to weapon. Ranged attack require a target to perform. Once a target is selected and the weapon is launched or fired, the projectile or missile will travel in a straight line to the target. If there is another attackable target in the line of fire, they will take the attack instead of the intended target.

Movement via the keyboard should be much smoother now. Also, players will find that both WASD and the arrow keys work for movement, as an alternate keybind set has been added for movement.

Cows got a visual upgrade this release. Moo.

Axes are now usable as a weapon in addition to their intended purpose. They do more damage than bare hands, but less than their sword counterpart.

The candle recipe has been redesigned to more resemble a candle.

There is currently one known issue with this release: