New farms, spruced up farms, lots of fixes and a winter theme!

0.17 is live and features a host of new features and fixes. The crash bug mentioned yesterday should now hopefully be fixed. Here's the changelog since 0.16:

New minor features:
- Econopedia now features what policies affect specific entries such as health, education etc.
- Discrete policies now display icon for corresponding political direction.
- Policy window spruced up a bit.
- Removed building placement constraint near atmosphere. Now, if a block has been placed, a building can be placed on top of it.
- Number of max trades increased to 50 sales and 50 purchases with Customs house. Without, only 5 each.
- Added notice for when building materials are running out and a zone wants to grow.
- Atmoports now have a maxcapacity (100k citizens or 20 active trades). Once reached, population growth will slow down.
- Because it takes a while to initialize resource prices and demand curves, there's now a loading sequence when opening the trade panel after loading the city. This is to prevent starting a trade when the price is zero (which makes the commission zero).
- Resource demand values and prices are now saved.

Major bug fixes:
- Issue with buildings sometimes not registering base efficiency fixed (occured sometimes when buildings were placed near a long straight road).

Minor bug fixes:
- Cars now deregister properly when a road is demolished.
- Fixed issue where vehicles would sometimes shortcut through roads instead of leaping off the edge when switching planes.
- Cars update home nodes on a thread to avoid them bogging down the main thread.
- Fixed bug where destroying bridges would leave the road tiles intact.
- Fixed issue where bridges would sometimes not register roads placed in 90 degree angle relative to the bridge's roadtiles.
- Tweaked bridges and allowing roads to be built properly beneath bridges.
- Fixed credit icon on goods tickets.
- Health policy now adds health production from clinics and hospitals as expected.
- Education policy now adds education production from schools etc. as expected.
- Destruct icon for super absorbent fixed.
- Resource separator is no longer affected by boom/bust cycle.
- Recycling center and resource separator now consumer prioritized, meaning these buildings use resources before other buildings. This prevents trash management to not be stopped when there's a lack of labour.
- Fixed case where amount remaining in tradepanel would display negative values.
- Fixed bug where sometimes starting a trade would not directly display the new trade item in the trade panel.
- Fixed gloss and normal maps for a handful of building footprints.
- Fix for building vicinity bug where buildings would sometimes not properly deregister a nearby building when it has been demolished.
- Fixed seldomly occuring null-ref error when demolishing a building while road network IDs are being assigned.

Other:
- Autoexposure dropped.
- Global time tick speed decreased slightly.
- A number of new policies have been added, forcing a redesign of the policy system. This means cities with policies enabled and saved will be loaded with incorrect policies enabled.
- Tweaked post processing stack slightly to avoid bloom triggering by sky.
- Spruced up farm buildings.

Overall, this version should be substantially more stable and less glitchy than earlier versions. It provides me with a good base to continue building on the policy system and continue adding new features. As for the road map, I've still got some catching up to do, but this version crosses a few items off the list. Remaining items are ongoing as of this version and should make it into the update early/mid January 2020, after which a new road map will be published. 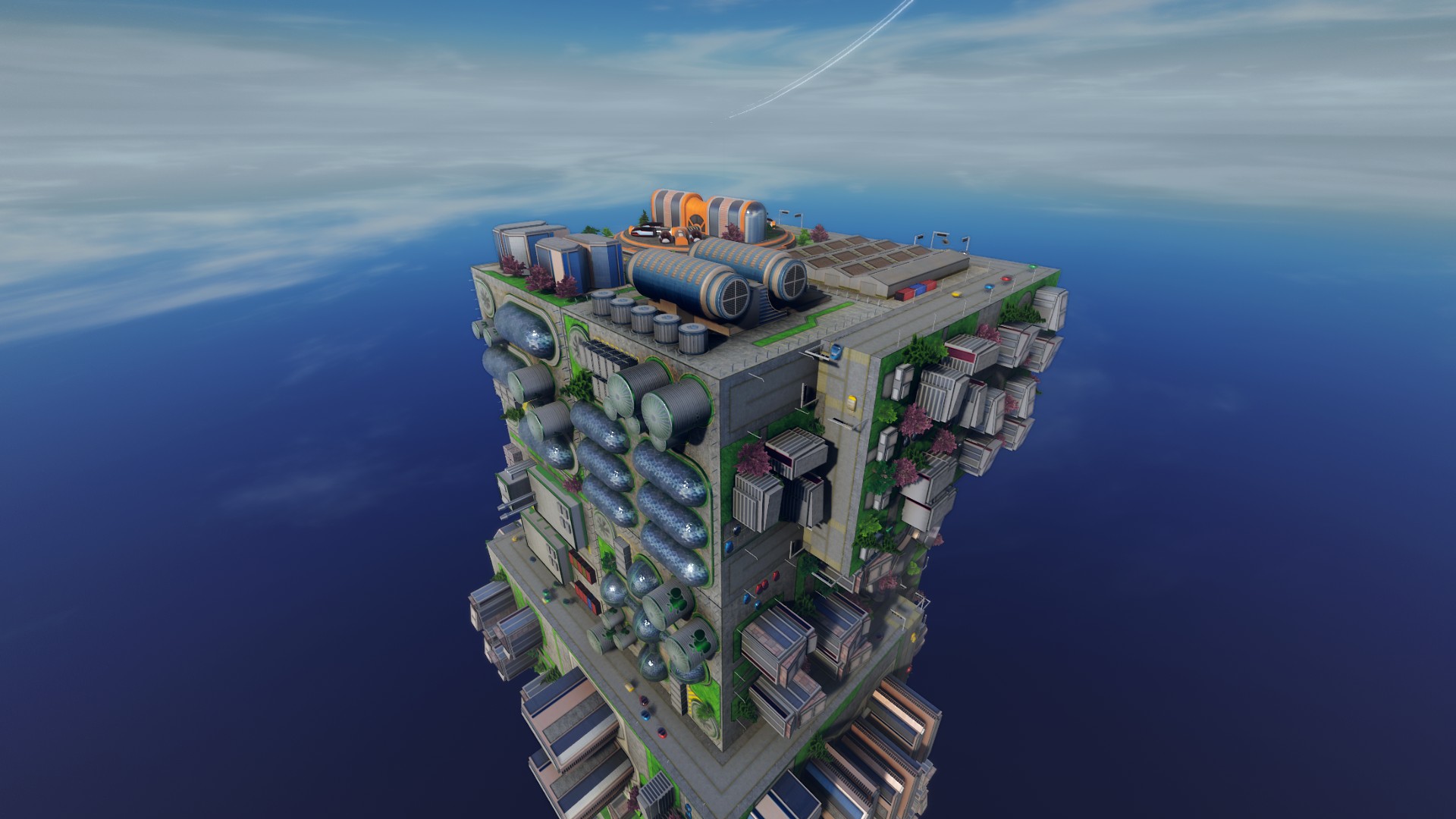 As mentioned in prior posts, this version features a full ten challenge levels. Further challenges will be added once more systems get finished so that the challenges can make proper use of these. 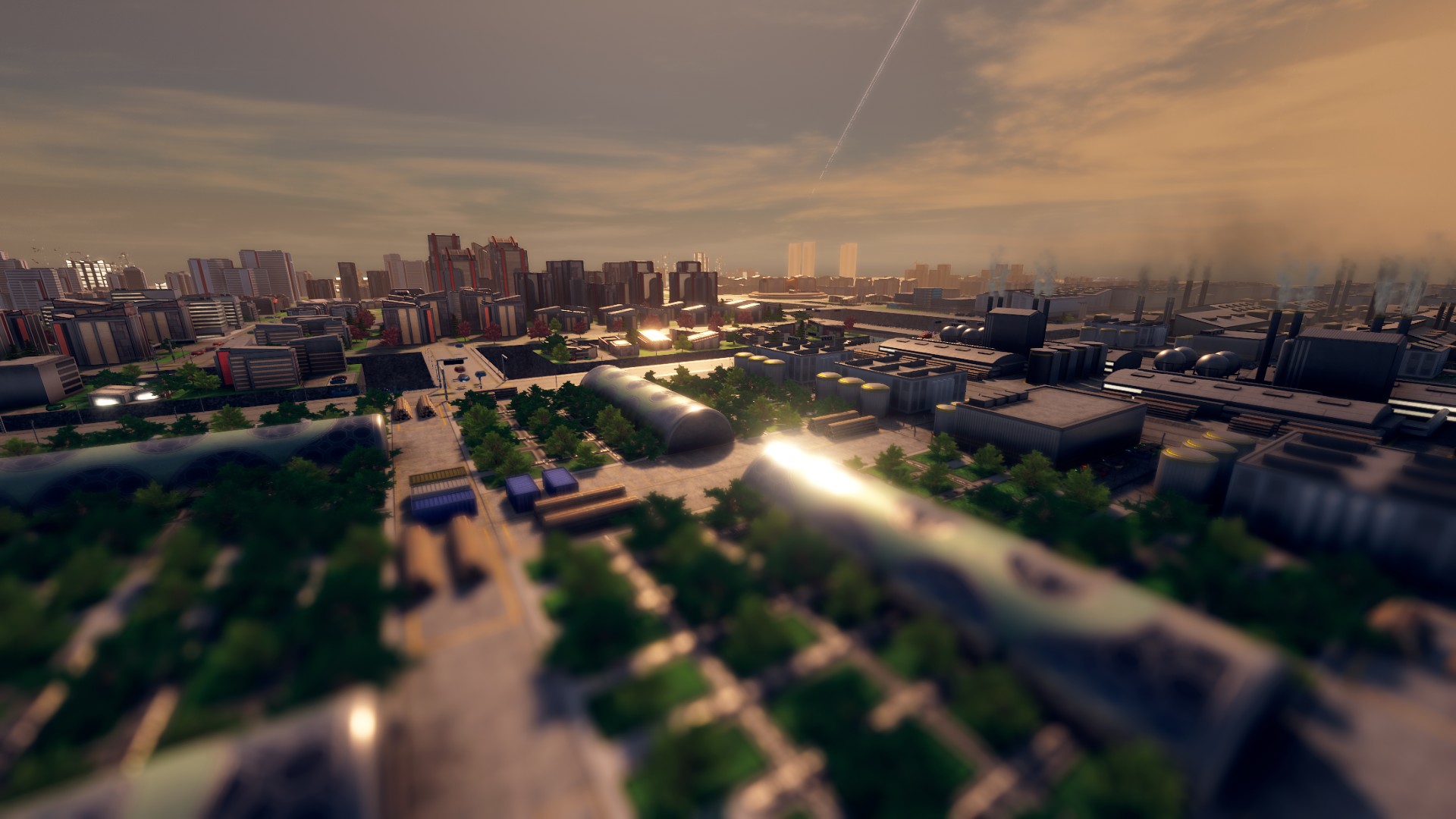 Food production now features coffee, tea and cocoa as well as processed drinks. These items have also been added into the demands of residences and come into play around the second to third density for each building. Drinks are a slight bit more costly to produce, but less is required to keep residents happy. Aside from new farms, the existing farms have also gotten a slight face lift. 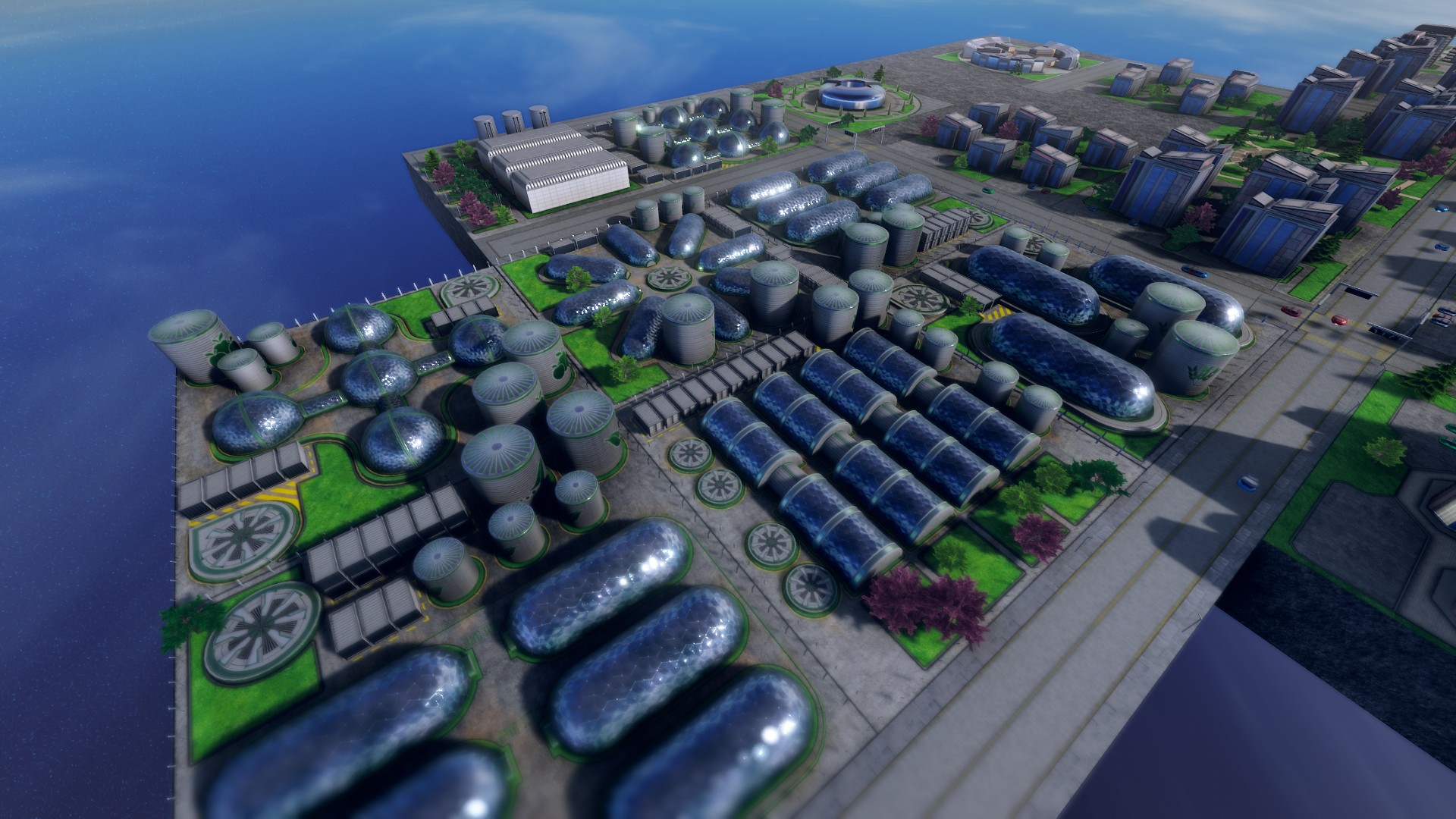 Trade and policy has been more stable. Several annoying glitches relating to trade and issuing trade have been fixed. The number of active trades now tops at 5 sales and 5 purchases when there's no customs house. Once one is built, 10 sales and 10 purchases can be made at the same time with one Atmoport. Building more ports allows more goods to enter and exit the city. To check the available capacity, Atmoports now have an efficiency indicator in the building information panel.
Policy costs and effects have been tweaked further, and several new ones have been added. Along with this, revenue from taxes and funding costs have been changed a bit as well. 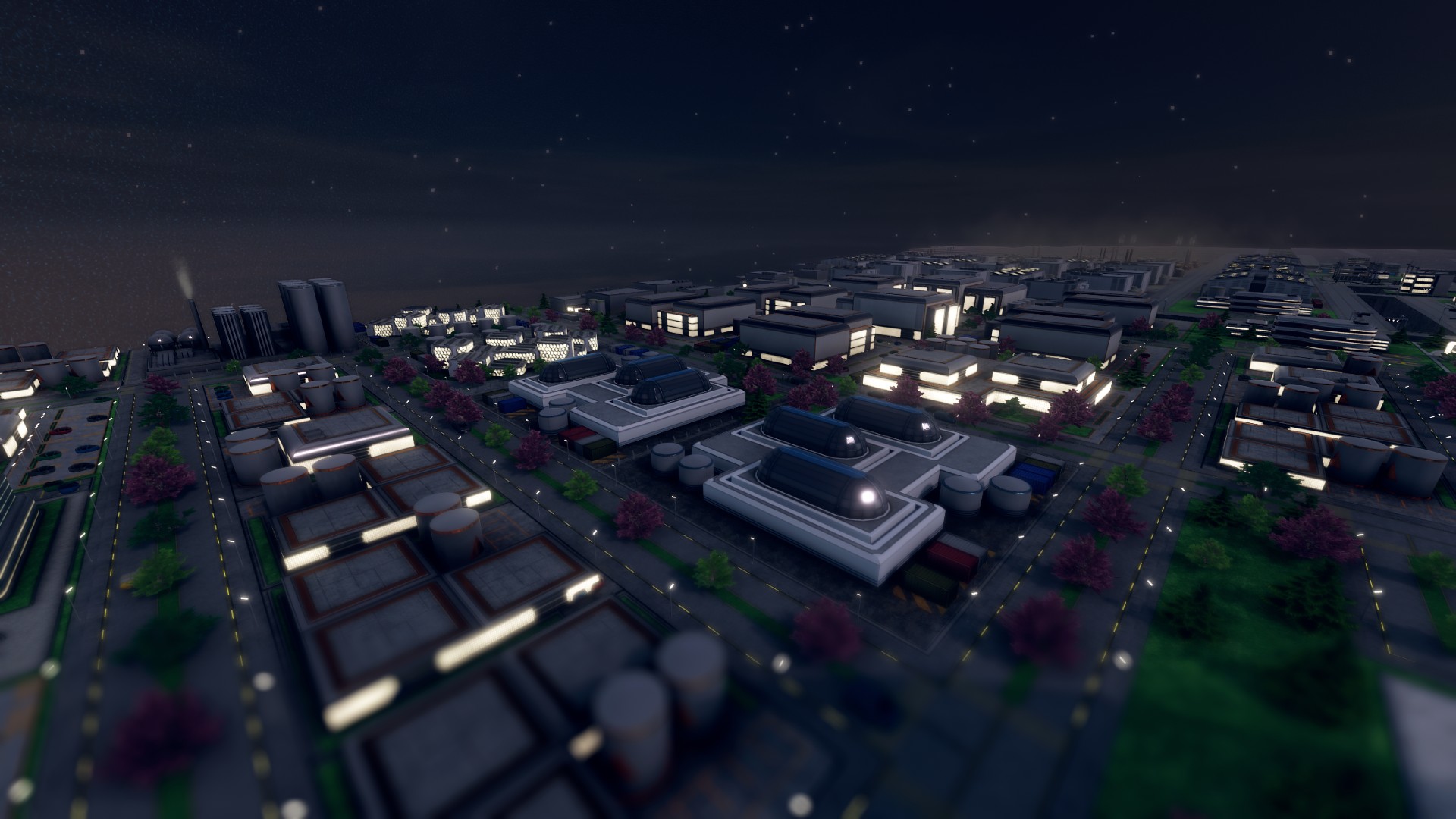 For a limited time, over xmas, the game will be winter themed. Eventually I will add seasons into the game properly, and allowing them to either shift naturally via in game time or system time. 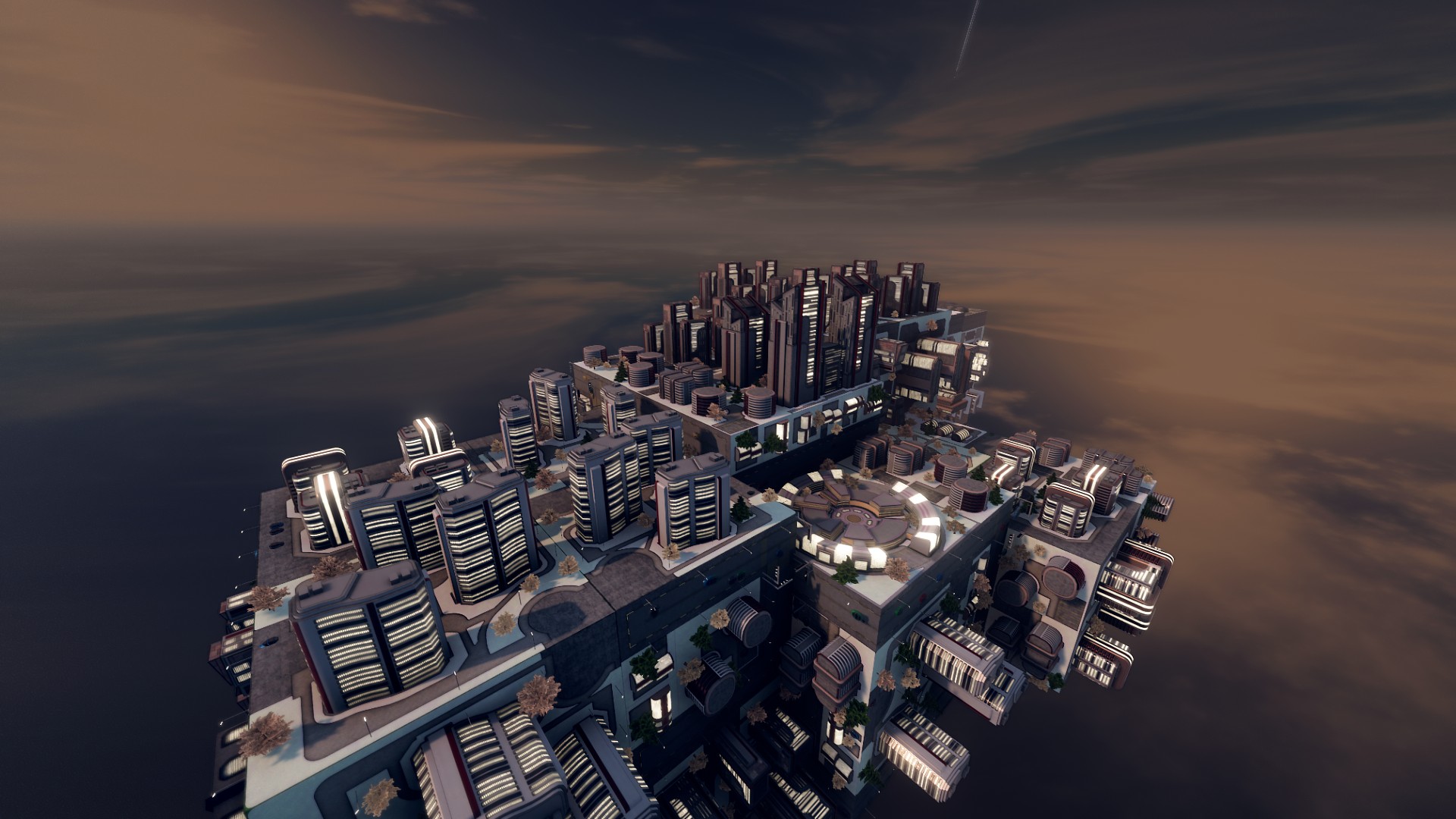 Lastly, there's been a number of fixes to glitchy traffic. There's still some tweaking left to do, but there should no longer be mass spawning of vehicles or masses of vehicles going off-road.