Wildfire Games, the international group of volunteers developing 0 A.D., are happy to present this week's 0 A.D. development report. If you want to find out more about the development of this open-source, cross-platform real-time strategy game or if you are interested in game development in general, it might provide an interesting read.

Now back to our (not so) regularly scheduled content.

Feature of the Month: Building Construction 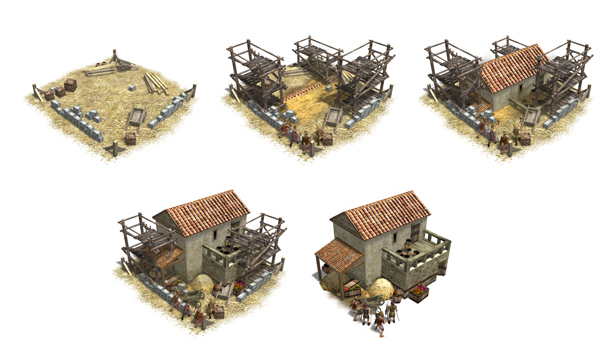 
Our one-man-orchestra, Omri Lahav has been busy lately, very busy. Not only has he finished a new track for the Celts, the Hellenes and Mauryans will also receive some new tracks very soon. As always, when a track is released you can check it out on Bandcamp.
historic_bruno added building previews that rise during construction (screenshot above) and a build script for OS X dependencies & bundles , making it easier for developers to work on 0 AD using OS X.
Aside from tens of bug fixes, historic_bruno also took care of textures not loading. Remember when you start a game and everything looks grey for some time? This should be a thing of the past now.
Pureon has committed the Mauryan headgear/faces and a siege onager. Long time, no siege! Currently he's tackling the Mauryan farmstead.
Enrique has been working on the Mauryan elephant units and the Mauryan Market.
Leper committed a lot of patches: player notification when receiving a tribute (by alpha123), template fixes (by qwertz/kosmo), tribute stats are added to the summary screen (by alpha123). He's also added user mod support and fixed a number of bigger and smaller bugs.
stwf has posted a patch with a rework of the sound manager. This is currently being tested and will hopefully be implemented soon.
Gen.Kenobi added normal, parallax and specular maps for all Mauryan buildings and ships.
Spahbod added a new random map, Kerala.
éminence grise Philip tinkered a bit with stats collecting (Windows 8 supported), he also fixed some static analysis warnings.
Battle detection was implemented by zoot! For example: when a battle is raging, the game will change the music from peaceful to battle music. This is only one example of the benefits of battle detection. More on this later.
ndragu committed a Mauryan warship.
Yves‘ Javascript debugger attracted the attention of mmayfield45, who created a web-GUI.
Mythos_Ruler committed a lot of balance changes.

See you in a couple of weeks with the latest development news!

If you want to be part of this project, we urge you to post your application in our forums. We are currently looking for Gameplay, AI, Sound and Graphics Programmers along with Animators and 3D & texture artists. You prefer to do something else than programming or drawing? Luckily for your portfolio we are also looking for a Sound Lead, Video Editors, a Documentation Manager and Scenario Designers. Still no luck? Head to our forums and join our active community

We are especially in need of (skilled) programmers who are able to help us make the game run better. Are you one of them? Redirect yourself to this thread. Your contributions are crucial.

lol t thought i had jumped through time when i seen the 11 :P bu tince update thx

The whole mod does.