Hi everyone. I'm a avid mapper for HL2. Not big on profiles so I will update this later!

So as most have probably noticed I really haven't updated anything to recently. I recently had to move as my landlord just sold my house I lived in.

So now that I am back up and running expect to hear some news and screeny's soon.

Just today I have started doing some work and trying to remember where I left off a couple of weeks ago. But things to start are:

So far things are looking really good and can't wait for my first group playtest. I'm sorry to keep this all so brief but I will post more as soon as it happens.

So I'm pretty happy to have something to post considering how busy I have been the last couple of days.

I have decided that my level needed some TLC that could only happen from being rebuilt. Some of the things I have done are:

-Rebuild each world brush one by one
-Properly scaled the world to a 64,128,256,512 unit size because apparently I can't count.
-Added to my original pit area in my map, I've actually expanded that to a mining camp now that is reachable by the player.
-Added an updated Zone C with much bigger playable space and a connecting path to the diamond shaped room in my map for quicker routes.
-Removed all displacements to be only a power of 3 and sewn properly
ETC ETC ETC

Either way here are some updated screenshots from the first test run, so no models displacements or details but it's better than it was before. SO please bare with me and hopefully with this kind of progress there will be something playable in the future.

Thanks for all your comments and support any feedback is highly valued. 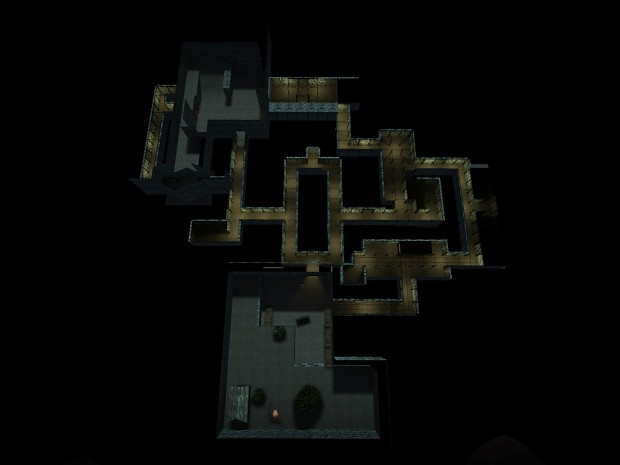 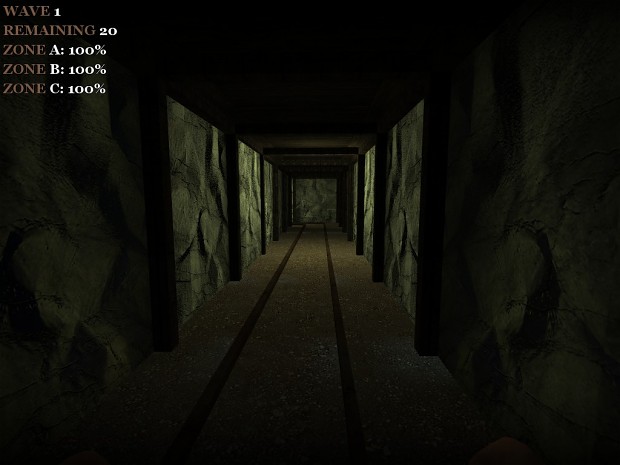 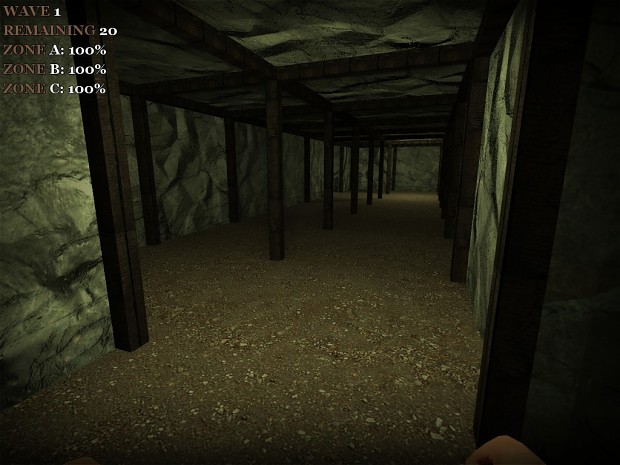 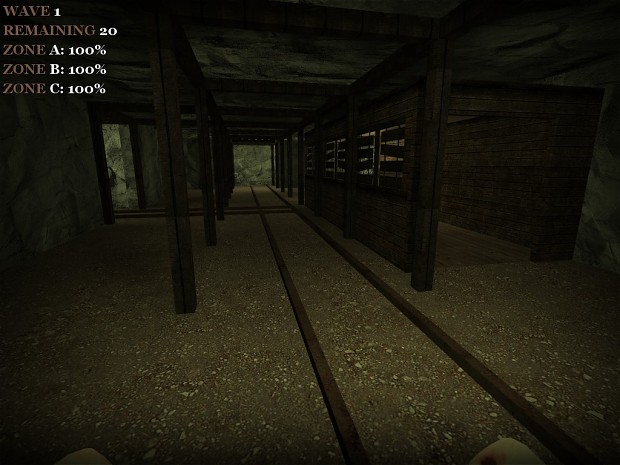 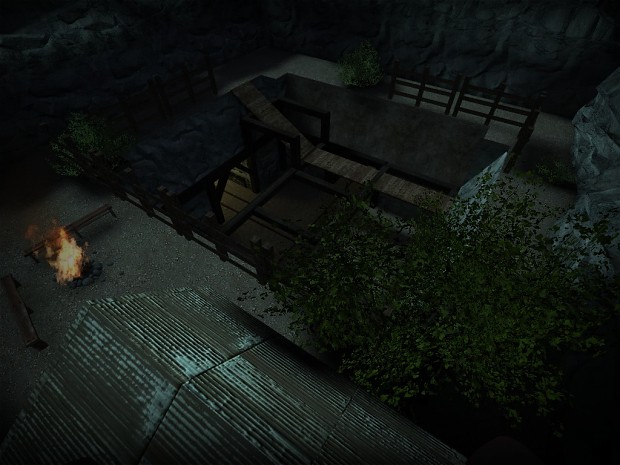 It has been a little while since my last blog. I've still been hard at work on my NMRIH map, but have been busy out of town the last couple of days.

I've really struggled with what to do with my mineshaft corridors. It was too much rock, everywhere. Too blocky with little detail.

I don't really want to get carried away with texturing and lighting while there is still brushwork to be done but it was just driving me insane. So I spent all night while away making some textures and produced about 11 custom textures of wood to help create some character in my level. Hopefully things will keep progressing as good as they have.

I also have been on the search for other work so if you know of any projects in the near future or need some help let me know.

I can't wait till I finish Zone B, and C. Those are 2/3 of the major rooms I have yet to finish brush work in. But it will be done soon enough.

If anyone has some ideas or suggestions let me know.

If my custom textures start to increase maybe I'll even release a texture pack but that's down the road.

Either way that's all from me for now.

After taking a break from mapping for a day or so I decided to get back to work. I finished this horribly long mineshaft corridor that was boring me. But because of it inspiration struck.

There will be objective to do if it's worth the risk. The corridor has a collapsed portion blocking people and zombies from making their way to you. Which is great because there is a spawn on the other side. Or you can clear the debris opening up the shaft but you could get screwed by zombies if they are on your tail and you didn't realize someone cleared that debris and you run into another horde at the other end :P 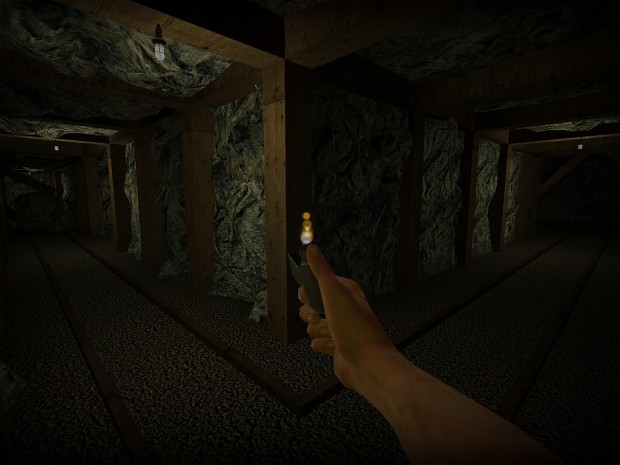 So since I my last update I bet you thought I wasn't going to be able to squeeze another one till later eh?

Well apparently my all day coffee and cig-a-thon also inspired me to get back to doing some 3d Models.
It's been awhile so I figure set a time limit and a item and see what I can do within that restraint.

Well so far this is the product of me playing around with ideas for a minecart. Not sure which way I want to take it yet (Modern Metals/ or Vintage iron and wood).

But either way, I had to toss in some nuggets just for kicks, because you can't have a minecart empty !

I'm sure I'll look at this when I wake up and be like wtf was I thinking but it's a good start. 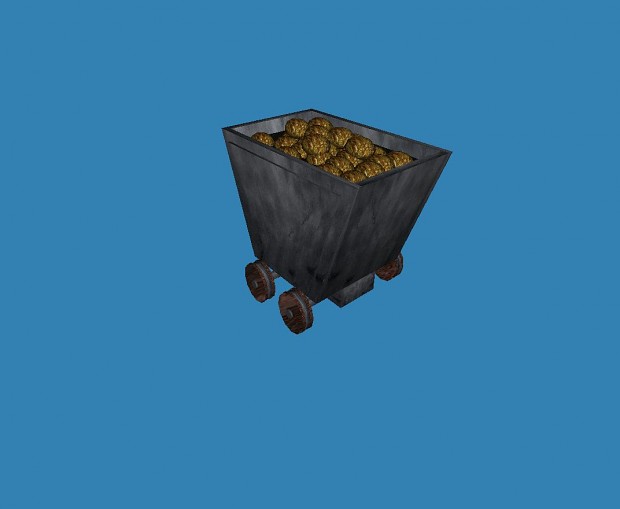 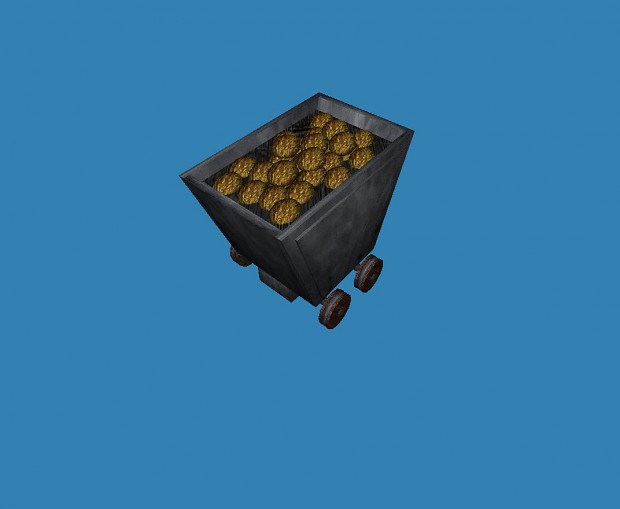 So today I went back to work on that room I showed yesterday. This was a little bit of dusting off the cobwebs for me. It's been awhile since I've done this much displacement work.

So today I went about it a whole different way, and scrapped my last attempt. After hours of work tweaking, pushing and pulling I think I finally ended up with something that would make me feel good enough to move on.

Which is great because there is a really long corridor right off this room that I'm dreading. So I'll be thinking of some inventive ways to spice it up a little bit so it doesn't get boring.

So I've added a miners supply shack for all that mining work they were about to do to this section of the mineshaft... or something.

I've also been tweaking the lighting to see what looks best. It also occurred to me while I was switching between computers that the darkness level is quite different from my gaming PC. Stupid TV!

But either way now I can take account for the added brightness of my expectations.

Enjoy the screenshots, I'm busy now that coffee is done brewing and off for a smoke.

BTW: Any input would be greatly encouraged and appreciated. 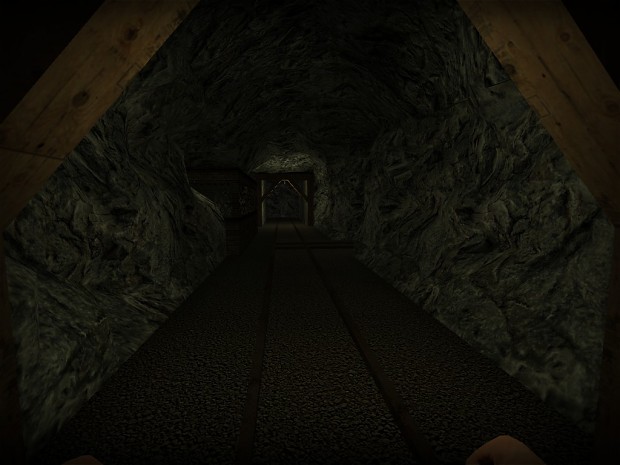 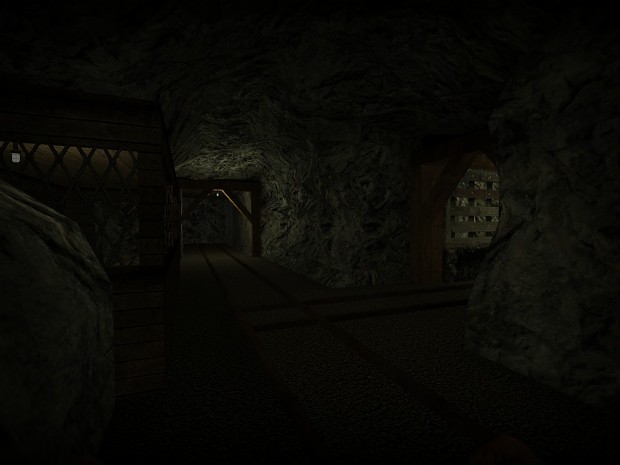 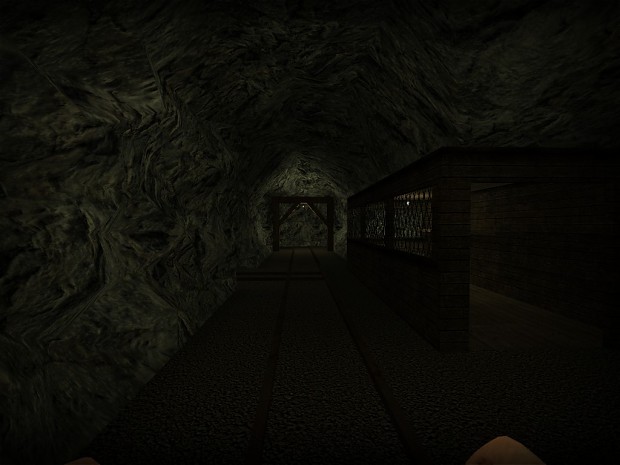 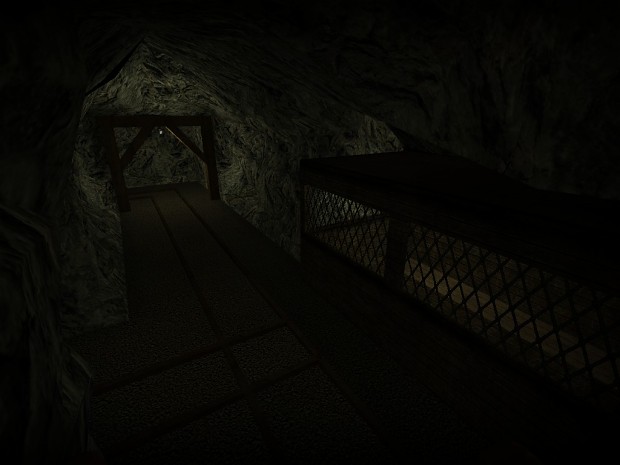 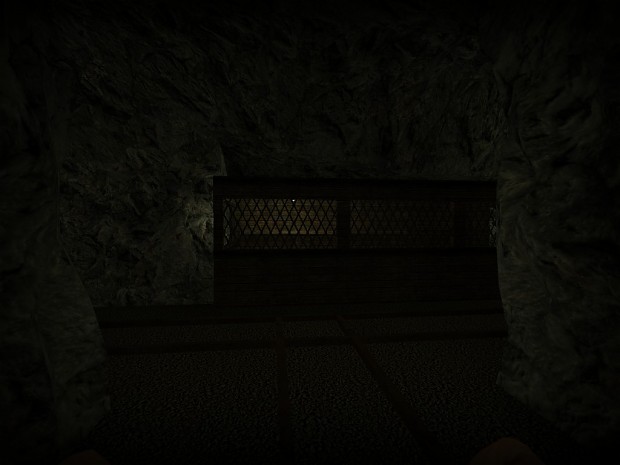 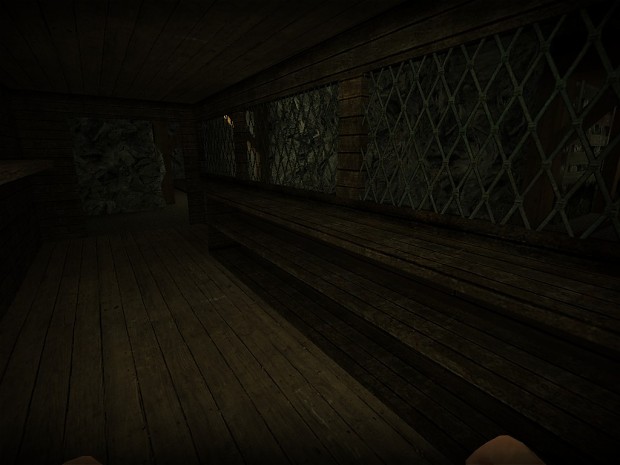 I can't wait till I start to test run this map with zombies.... ugh soon enough.

Either way check this out. 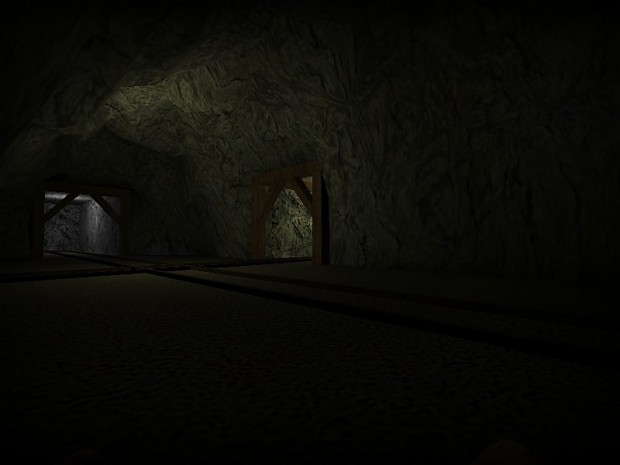 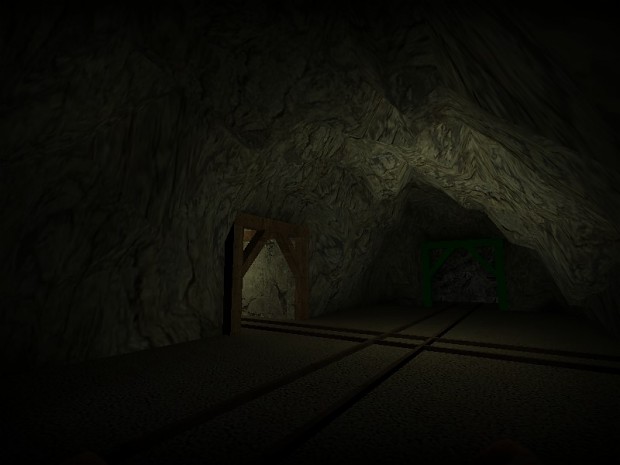 So tomorrow hopefully I'll finish displacing brushes and finish the mineshaft framework throughout. Maybe with some lighting tweaks and tests along the way to see what I like best.

Alright I'm off to go deal with some dumb degenerate triangles.......... grrrrrr

NMRIH Map in the works

Here is a little tease to show what I've been working on. The layout is done but there is still much work to do. Looks like I'll be using the displacement too quite a bit! 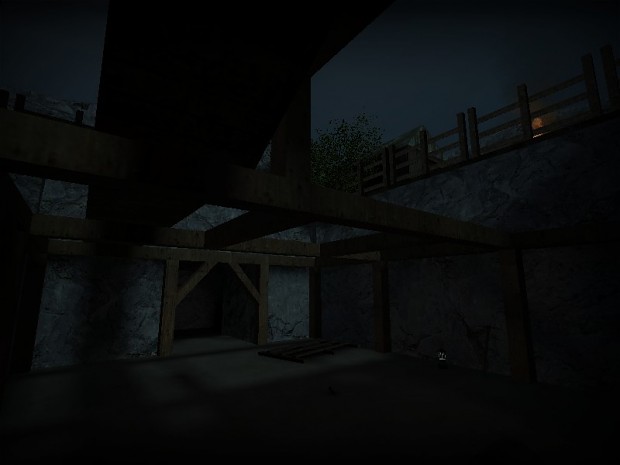 So today I made an effort to track down a map I lost 7 years ago. ZPO_Maze for Zombie Panic Source!

My hope is to take another look at it, optimize it and fix up the objectives. Hopefully it won't require a total rebuild but you never know.

Maybe even a NMRIH release if I feel that it will fit. 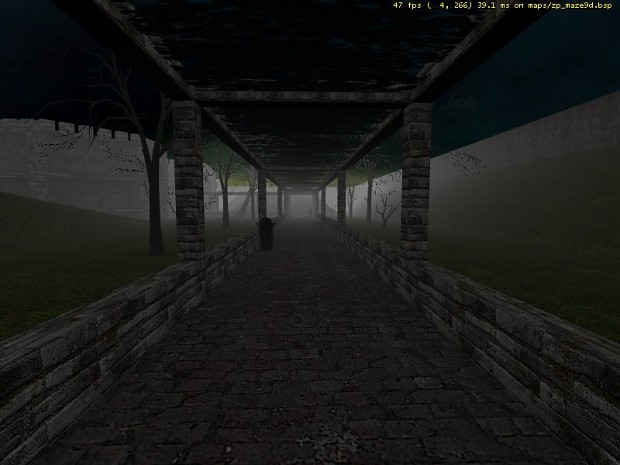 Ok so I've been working on a new HTML5/Canvas/JS Game that's compatible for the 3DS Web Browser.

I intend to implement dual screen support in the future

.Right now it's mostly a Tech Demo so features aren't really added yet, but I wanted to get some feedback about how it functions on other 3DS's before I continue. I do see this hitting other platforms in the future but just working out some game mechanics for the time being.

This is all new to me, so bare with the cheezy paint graphics till I am ready to update.

I'll post more info on features I plan to add later (unfortunately I think the 3DS version will be more limited than the rest for obvious technical restraints).