A lot of designers build their games based on the idea of what a game should be (and I'm no different), and not what a game can be. This leads to unoriginal thought and the use of certain recurring themes (tropes) that aren't always necessary and can often be a detriment to the game. In this series, I'll bring to light my personal opinions on a number of the most egregiously mis- and overused of tropes. 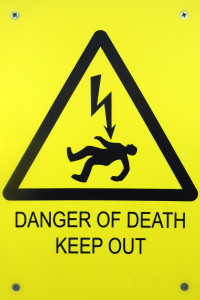 Death as a punishment


Why not start with a controversial one? Hear me out. Death does not need to be the end of every single game. I get that in a shooting game, death often makes sense as a punishment, but is it needed every time? Think about Mario. Does the game really need death and restarting? A Mario game is a fun experience of exploration and timing, they're fairly easy games and most of the fun is from sheer joy at the magical level design and the wondrous worlds created. It's not a reflexive twitch shooter, it's an adventure. An adventure that doesn't need a game-restarting penalty. Think how hard it is to game over in Mario Galaxy. They don't want you to see the game over screen ever, they want you to have fun and not get frustrated, so why not finally pull the trigger and remove death entirely?
And even when death makes sense as a penalty often the way a player experiences death is handled appallingly. Darksiders is a perfect example of death done wrong. Death is the go-to fail condition where surely it's less a final verdict and more a meeting of old work colleagues. Instead it might have been more fitting to have the horseman Death appear, taunt you, and perhaps aid you in your quest. Of course the lore might need a little massaging, but it wasn't exactly grade A material to start with.

Death as a torture


Even worse is the restart that takes place before a cut-scene - skippable or not. Nothing kills the mood better than being forced to sit through a bit you've already done, and this goes double for when that bit is non-interactive. I remember a point in Darksiders where I climbed a building, killed 3-4 low-level enemies with one hit each, crossed a few treacherous jumps over a set of roads and sat through a cut-scene which amounted to a large monster essentially jumping a couple of times only to lose the next battle and have to repeat that entire sequence again. At what point in the game did those minions become crucial to the flow of the experience? Why did I have to see this monster jump up and down at all? Let alone each time I died. It was frustrating and I nearly didn't get past that section through sheer annoyance. It's 2013, people. If you're spending millions of dollars making a game, make your cut-scenes skippable.

More recently, there's a wonderful video review of the latest entry to the Need For Speed series by TotalBiscuit, in which failure to complete the tutorial in one sitting causes the game to make you sit through all the opening cinematics and tutorials again. Check out his extreme frustration and heed the warning; developers and potential customers alike.

I don't want to just focus on the downsides and pretend that all of gaming amounts to failures so I want to end on a high note. Let's celebrate some games that try to do something different.Far Cry 2 - for it's many, many faults (seriously, I hated playing it) - has an amazing approach to player death. If you've managed to make a friend in your travels, a total loss of health causes you to blink in and out of consciousness, across the screen flash fleeting images of your friend arriving, shooting in the distance, dragging you to safety and then pulling you to your feet. You restore a bit of health and then they join you in the fight. It's an excellent way of balancing difficulty automatically. Is a section too hard? We'll let you try it yourself, but if you fail we'll send in back up. Of course, if you die again after your friend has rescued you, you die for real, but repeating the process might be a bit ridiculous.


Demon's Souls had possibly the most ambitious and clever use of player death I've ever seen. The game consisted of two forms, body form (normal) and soul form (after you died). When in soul form, you have half HP, but some character types will deal bonus damage. To return to body form the player has to kill a boss in soul form, or enter another player's world and either help them kill a demon or kill the player.

Know any games that make an excellent use of death, or that have gotten rid of death entirely where one might expect it? Got ideas for future Tropes articles? Disagree with me and want to call me names? Post a comment!