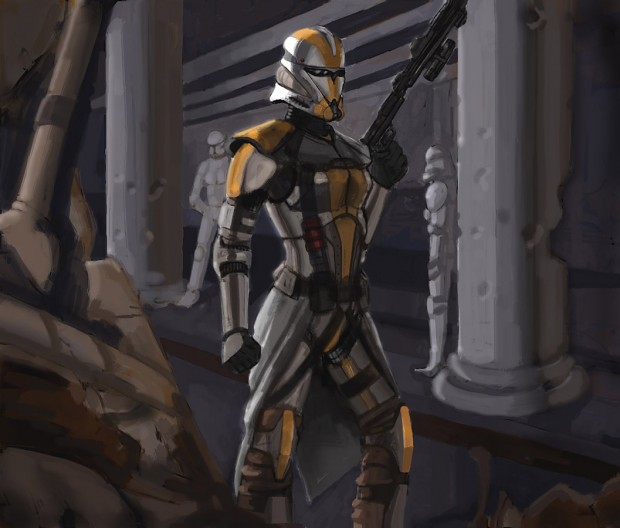 Athlena Rose is a compassionate and funny person, though like most Mandalorians uncaring for people she does not consider brethren. Easily confused by everything, it is disputable if this is a ruse to make her seem as an easy target or the truth. But its widely known that all who cross her end up dead.

She has short red hair, deep blue eyes and is of a small stature.

Her dark green armor has a jetpack with missile and built in wrist vibroblades and flamethrowers. Her personal weapons include a sniper and a pair of slightly modified pistols.

Not you too :P

Well, I still have one more character to be put.

"adenn's fragile mind"
LOL if anything he has the strongest will in this rp = stubborn :b

and most of not all mandalorians returned to mandalore when adenn rallied them so... not wanting to critizise your storry, just wanted to point that out :)

Sometimes reality needs to be bent in order to make a good story.
Though I will leave you with the question: What reality did I bend and what of my plans did I reveal?

Maybey but don't push your luck in that regard.

space is cool and will always be nr 1, right?

Before anyone asks, yes this image has been uploaded before. But I'm not in the mood to go back to where it's located.

But anyway, here's my RP character and information about it:

Athlena Rose was born on Mandalore, in Sundari. Like most of her people she became a warrior first and foremost and was taught to serve Mand’alor loyally. But of course nobody is immune to doubt, and when the charismatic Vivec rose up with his ideas and opinions of a new society of Mandalorians that were far different from those she currently knew, she and many others could not resist joining his crusade for a new Mandalorian Empire.

Athlena was among the first to join Vivec, and his secret paramilitary by now widely known as Task Force Black, commanded by Nemesis. Others joined as well, and one in particular caught the eye of Athlena, the man simply called himself Ori’verda.

The two were present at Ruusan during the raid, their task was to capture a weapons storage facility needed to arm the movement. When the facility was in sight, their transport was shot down by flak and they were surrounded by Stormtroopers and clinging for their lives along with their squad that was brought down to half its strength.

They received orders from command, if they wanted to escape they would have to break the encirclement and make for a rally point several klicks away.

Athlena and Ori’verda promised to watch each others backs and then dove into combat.

When they arrived at the rally point, they were the last survivors and were barely able to stay awake. Ever since this event, they were inseparable.

All seemed well for a time, Vivec had taken his part of the galaxy but his brother Adenn changed his fragile mind and decided that Vivec was to be removed. But the work Vivec had begun was not yet destroyed. It merely evolved into the Pentastar Alignment, which Athlena swore her allegiance to. That and all Mandalorians who supported Vivec were branded traitors.