Greetings, stranger. Welcome to my page. I am Ori'verda AKA Milos and I currently live in the Netherlands. I like games, girls, books, movies and teamwork. Also I enjoy discussing about religion, politics, history and such affairs. And ignore the fact that a lot of my groups are Science-Fiction related, I love Sci-Fi for good reasons! ☢ ☢ ☢ P.S. The video with the redhead is not porn! I may be a crazy Serbian but I'm not that crazy. Besides that I'm a goof, in fact to show you I am going to fill up the my description with random banter, why? Yeah you guessed it, I'm not that strange or weird it is in fact to get a HTML code to work, if you don't know what that is good luck. Regardless I suppose I should continue filling out this description field according to that manual so I can get a cooler description, I don't know if that makes sense to you but according to the manual it works so it must work right? Well it should otherwise you would not be seeing this. 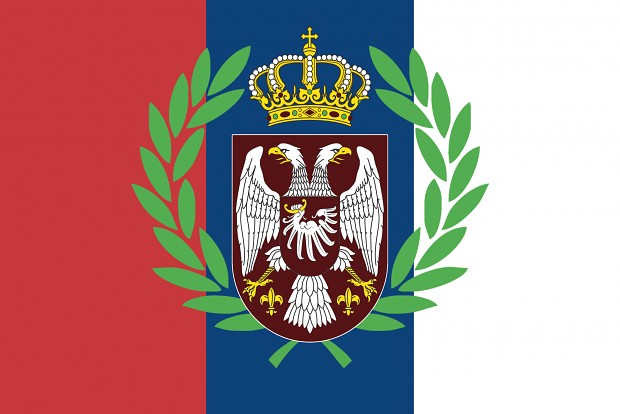 Looks good even if it's fictional.

Original by SRB-HawkEye who vanished from ModDB years ago. Gone but not forgotten.

"This is a flag of the Tsardom of Voyislavia. It's name is a made of two words: vojnik (soldier) + slava (glory), and it deserved it because of many heroes who were born in this land.

It is formed on the territories of nowadays Albania, Macedonia, and Montenegro. This country is neighbor with Serbia, Greece, Bulgaria, Croatia, Bosnia and the Northern Hellada [fictional country formed on the southern part of Macedonia]. With the most of the neighbors it has good relationships, except of Bulgaria, who wants an eastern part of a former Macedonia. Croatia and Bosnia have imposed sanctions to the Voyislavia because this country closed the borders, making Croatian and Bosnian trade with Greece and Middle East impossible. That was an answer for open Bosnian and Croatian support of rebellion in Voyislavia.

The main social system is monarchy, and the Tzar is from the famous family of Stefan Dušan VII Orlović, hero from the last war between Voyislavia and Albanian Republic. Recently Voyislavian king considered the establishment of democracy.

The main currency is Dinar, same currency as Serbia use, making it more stable than in 2016, where it nearly devalued on European markets.

Military is strong, but defensive. The Voyislavian Army is consisted of Voyislavia Royal Navy, Voyislavia Royal Airforce and Ground forces. The most weapons are Serbian and Russian manufactured, but with NATO standard small caliber weapons.