Welcome! I'm the dork responsible for the Half-Rats series. I like to make music and draw. I front the band, "Arsenic Tea Party", and I enjoy prosciutto way too damned much.

Welp, it's been a little bit, and I almost didn't make it to 2020. By all accounts, I SHOULDN'T have made it to 2020, but I did. The creator of Half-Rats could not be expected to do anything less, but survive all odds.

First of all, I ended up losing my house - big surprise. Then, I lost my job - naturally. I had to sell off, leave behind or give away just about everything, and am still surviving off of whatever I have left to sell. It wasn't long before the bank fucked me over - and what little bit of money I had in the band fund is still being held hostage by Chase Bank. The icing on the cake was when I got shot on Thanksgiving. I'm not going to go into details, but someone brought a gun to an argument, and I ended up having a .45ACP rip through my pelvis and sever my femoral artery. I'm still recovering. 2019's final kick to the ass was taking my grandmother, who passed away recently.

I somehow am still here, defiantly. As far as creative stuff is concerned. I'm laser-focused on my new band.

There were talks within the Half-Rats discord server to resurrect "Half-Rats: Dawn of Pestilence", but everyone is too busy, and I think just about everyone else in the world has moved on from Half-Rats. There's still a storyboard, a nearly-completed map, and some weapon/monster/friendly NPC models tucked away if anyone REALLY, and I mean REALLY wanted to lend a hand. I might just go ahead and bring it out of its coffin and fuck with it when I have the time - maybe some of HG's old staff will want to work on it in a couple years.

As far as the comic is concerned, that's also on back-burner. I'm going to finish up these remaining three issues now that I feel better, then continue the story as a serialized bunch of short stories, or "pulps". Not sure where I'm going to host them, but, I don't think anyone's banging down my door for HR content. If anyone is interested in helping out with the art, I might continue it as a comic, but, eh.

For those of you who are still followin' me, a whole lotta' crazy shit has been going down since my last update. I actually finished my first Half-Rats-related creative content since 2017 on Halloween. That's right, the first issue of the comic is out. More to come, but I've got to hold up on that because I'm in the process of relocating yet again. Things have been a little rough - to put it lightly. I've had to sell off my guns, items from my childhood, and leave behind a lot of things that we've collected over the years to keep my car, and keep us packed light. Thankfully, I got a place lined up and I'm currently seeking employment.

I've elected to keep my chin up; and as far as creative endeavors go, I'm putting most of my focus on my new band, Arsenic Tea Party. For those of you who liked Ague, you'll probably enjoy this one as well. We've been gigging quite a bit recently! We might even come to you if you've got the scratch!

We've got a new music video coming out for our song, "Solvent-drunk", which may or may not have been inspired by Half-Rats, haha.

Currently, I'm looking to fill in the gaps by doing voice over work, music composition and other audio work. So if you know anyone who needs it, look no further.

I'll be coming back with a vengeance.

Where Has The Time Gone?

where has the time gone?

That's a good question...Last I knew, I was living in the middle of a cornfield at my parents' place, sucking down whiskey, and running myself into the ground with game development and factory work; all while dragging along a failing solo recording act. A lot of bad happened, and a lot of good. Now, I find myself involved in a new musical project, the Half-Rats series is now a comic I'm currently on the 4th issue of, and I've got my own place in one of the most dangerous cities in America. I find myself wondering what the hell happened, and it feels like I'm waking up from a strange dream...but at least it feels like I'm waking up finally. I'm not sure what happened, or who I am exactly - since I lived my life as "Half-Rats" for so long, I think I forgot! Even so, I feel my strength coming back, and I got a new purpose - but at the same time, I realize I learned a lot during this "dream"! I learned what NOT to do.

I'm going back and finding bits and pieces I left behind, and it feels like someone else's life - and then I realize it was mine, and I can't help but feel a little bad for how things went, and how I suddenly abandoned some pretty neat-looking projects. That shitty feeling sort of dissipates when I see this interesting little bunch of pages I drew (Some not done completely), and I yearn to get back in there and finish the tale of Half-Rats. Not AS Half-Rats, but as me this time. 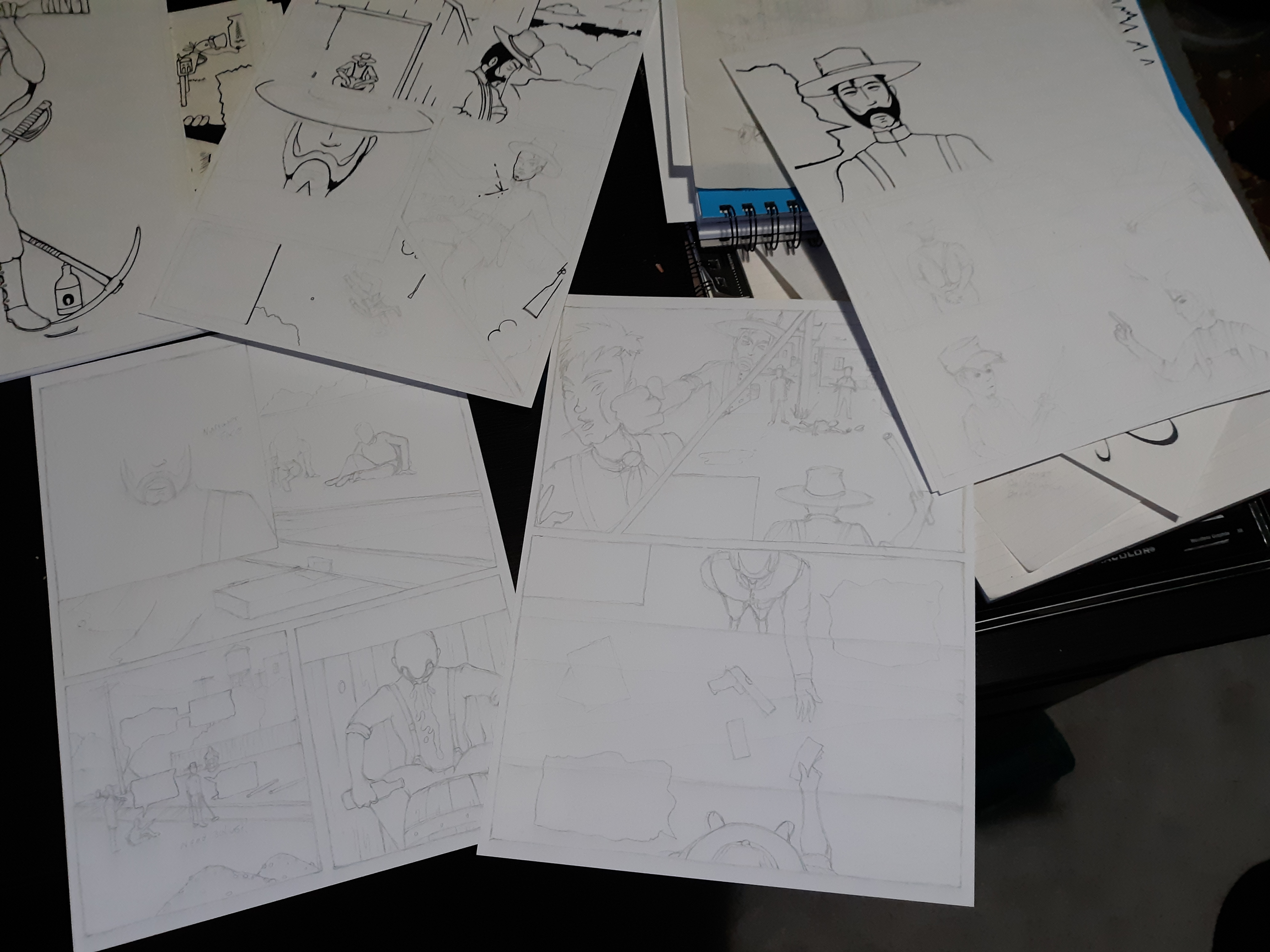 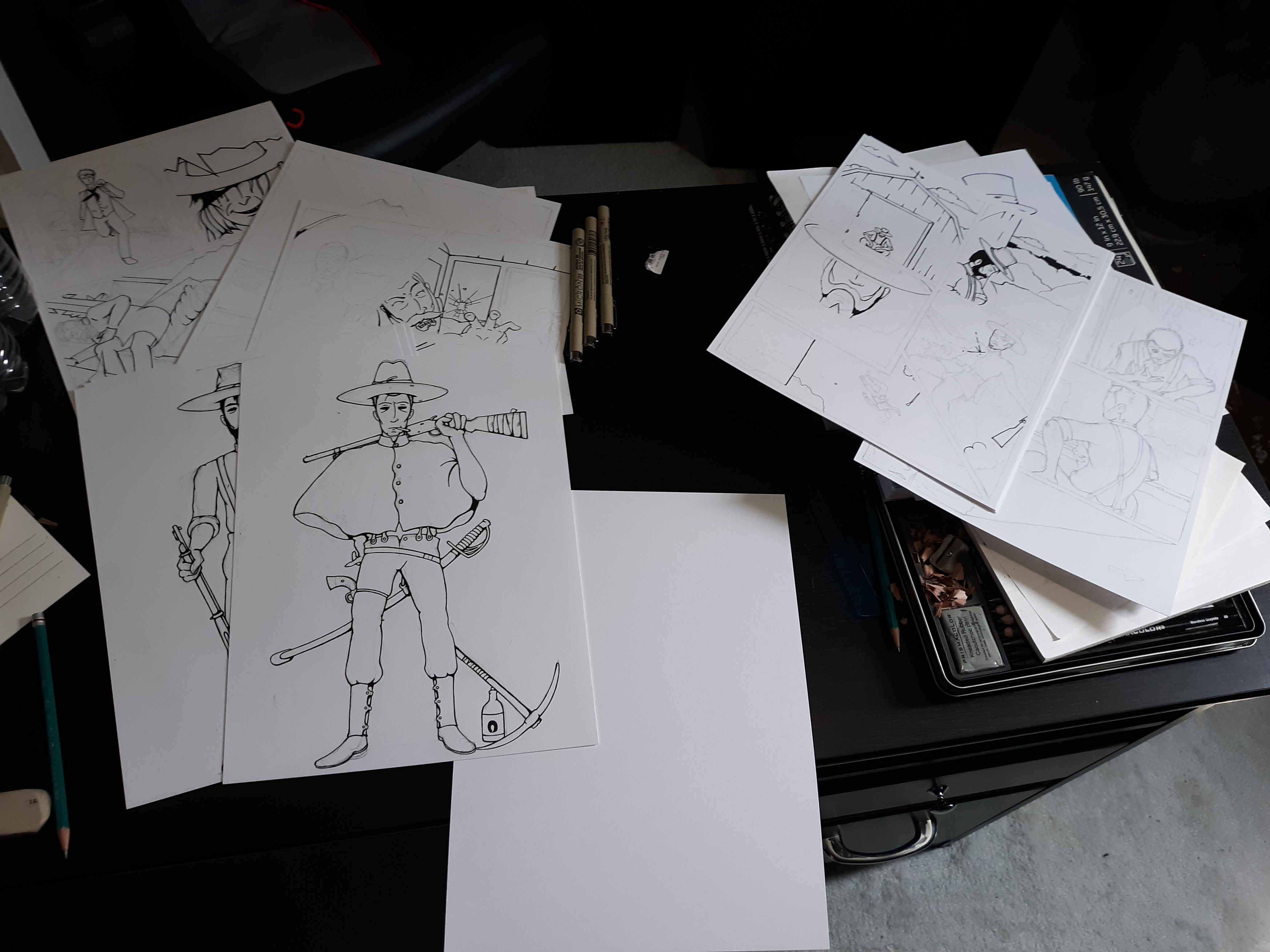 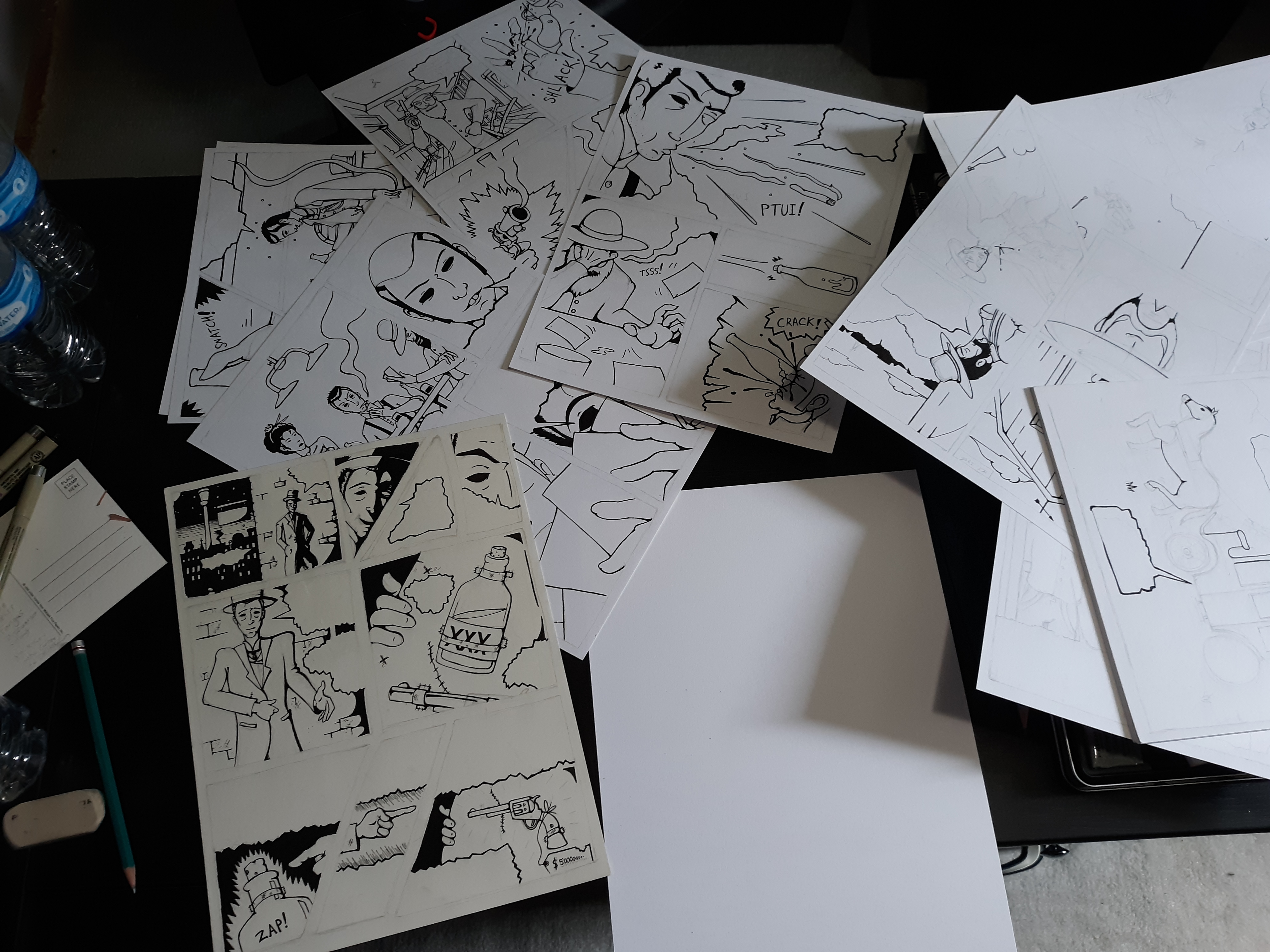 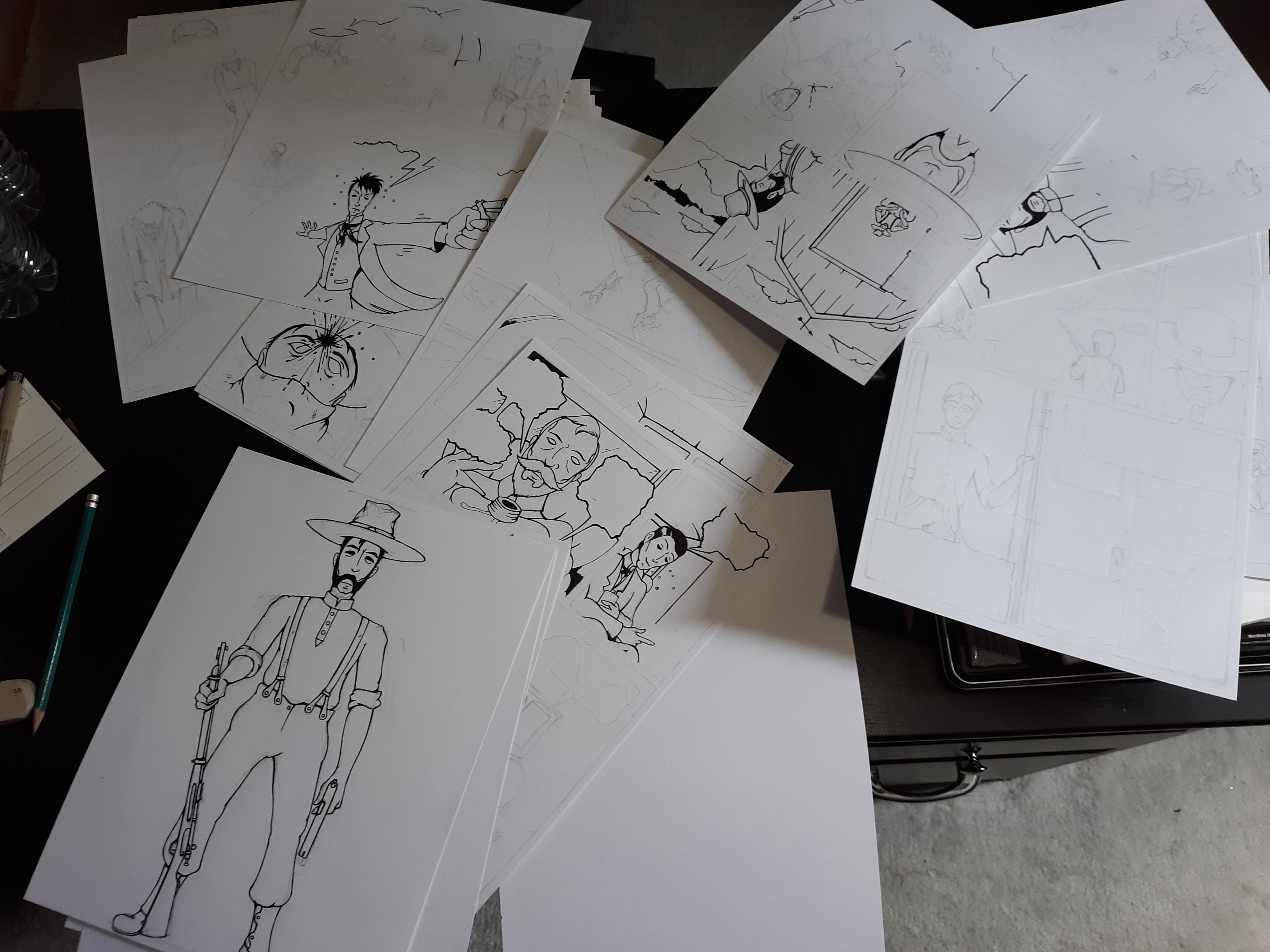 Damn! Then, I go and look at this crazy new band I put together...

And I start to realize that this is a new chapter. And despite still feeling a little foggy-headed, and a few unfortunate setbacks, (My saber, and a few other items were taken in a burglary, and my pecuniary affairs are less than perfect...) I think I got this...

The Music of the Half-Rats Series

the music of the half-rats series

Since 2014, I've been working solo as a recording artist, with the occasional live performance spattered throughout these few years. This solo project has been responsible for supplying the soundtrack for each of the entries in the Half-Rats series. Normally I use instrumental versions of Ague songs, as you may have seen available as downloadable OST's on the Half-Rats mod pages. Well, I thought I'd share the full, album versions of my songs via my soundcloud - especially in lieu of the fact that I am now working on my 5th studio album. So, if you're interested, feel free to follow this link to pure sonic mayhem! Most of them are available as free downloads, and if you're feeling especially generous, there's purchase links as well!

And get ready for upcoming releases!