Jay "Rampant Coyote" Barnson has been a gamer and game developer for a frightening number of years. He got his professional start right our of school working for SingleTrac making best-selling (and some not-so-best-selling) games for the Sony Playstation and PC, including popular titles "Twisted Metal," "Warhawk," and "Jet Moto." After years of joy and frustration in the mainstream games biz, he struck out on his own as a part-time indie to make his own games.

With his latest title, Frayed Knights: The Skull of S'makh-Doan, Jay has focused on the unruly beast known as the Role-Playing Game, the rock upon which many an indie has wrecked. Embracing old-school turn-based combat with a party of adventurers in 3D first-person perspective, and a tongue planted in its cheek, Frayed Knights is both a return to old-school RPG gameplay and a quest for new areas to innovate to make the style as fresh and as fun as it was two decades ago.

What Is That Old-School RPG Style, Anyway? 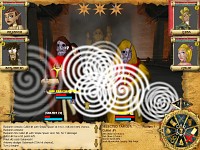 I saw a post recently that referred to the surge of old-school style RPGs (like Frayed Knights: The Skull of S'makh-Daon) to being the new trend or "hip." It's news to me if it is, but it certainly wasn't when I started the project!

But I do think there there's a void in the RPG genre that players are beginning to notice, and the indies are working to fill it. But what is it we're trying to feel? What's that "Old-School RPG Style" that modern RPGs have lost, anyway?

It's easy to point at things like turn-based combat, or having full control over a party of characters, or having lots of stats as being "old-school." Truthfully, you don't get much of any of these anymore. But we had arcade-style "Action-RPGs" like Gateway to Apshai almost a decade before Diablo. I think single-character games predated party-based games on the old mainframe computers. And stat-heavy? Puh-leeze. I don't think that's ever been "in vogue," just never quite the endangered species as it is now.

Really, the thing that probably defines "old-school" in my mind is a deviation from the conformity that modern "AAA" RPGs seem to be sliding towards. This isn't to say their games aren't excellent or fun - they are! But they are generally staying in safe, proven territory.

What we've really lost from the "old-school" RPGs is a level of experimentation. Take a cross-section of PC-based CRPGs from about a ten-year era: let's say Ultima IV, Ultima VII, Might & Magic III, Might & Magic VI, Ultima Underworld, Pool of Radiance, Dungeon Master, Darklands, Ishar, Times of Lore, Wasteland, Sentinel Worlds, Hillsfar, and Betrayal at Krondor. It could be difficult to tell that they are all part of the same genre (and many people still maintain that some are not). It's possible to pull several features that are common to a few of these games and rare or non-existent in today's games and call it "old-school," but they are nowhere close to universal.

But they don't need to be.

What many indies are doing (and I like to see myself included in this fine group) isn't really trying to turn the clock back so much as to re-examine this fertile territory for ideas that were prematurely abandoned by the mainstream studios in search of the lowest common denominator and largest possible market. There were a lot of fun ideas that can and should be revisited, mixed with new ideas, and explored.

It's a different course for RPGs, as we back up and move forward in several new directions, but it sounds like a really fun ride.