Today I'm planning to give a small, and probably terribly boring, run-down of my long spun-out process of designing borders, compositions and backgrounds for some of the images you can see on the Ilsamiren Wars for Crysis profile. It was actually quite a difficult process, devising a format for images of models to give all the information that was necessary while retaining some kind of simplicity. Here's how the current image style (visible here and here) came about.

Stage I - Version 1
The earliest images I uploaded were simply pictures with the mod's banner added at the bottom. As you can see, they were hardly subtle in their design, but they did communicate the origin of the image - the IW project for Crysis. This banner also featured the mod's logo (the Ilsamiren D - the shape in blue at either end) and a sample of the Ilsamiren writing system.

Stage II - Narrow Borders
The next stage of the process replaced the large, crude border of the earliest images with a top and bottom frame. This frame was much narrower than the original, but retained the Ilsamiren writing system (now actually extended) and the title of the project.

These images also contained descriptive text at the bottom, but this did not remain beyond the first test image as ModDb (and any other place where the image would be posted) could easily provide a longer body of descriptive text outside the image itself.

Stage III - Flat Coloured Backgrounds
The next iteration of the image format introduced an area of flat colour to replace the black background seen on previous images of models. This colour was initially a violet-blue derived from the Ilsamir blue simply by moving the colour closer to grey, reducing its intensity. This flat colouring was, for a time, used for all model images regardless of their cultural origin (i.e. not only artefacts from the Ilsamir lands, for which the bluish colour was appropriate, had this colour, but so did objects from the Western and Southern Kingdoms).

This was clearly inadequate; even if the public would not notice the discrepancy, I felt sure that I should decide on some sort of branding for each faction which went beyond the descriptive text. I therefore gave each culture a distinct background shade based on their favoured colours within the fiction: a kind of spearmint green for the Western Kingdom, a washed-out yellow, almost sepia, for the Southern Kingdom.

Stage IV - The Final Iteration
These flat colours, too, did not communicate enough on their own and were, let's face it, hardly more attractive or meaningful than the Ilsamir violet-blue had been. I needed some way of communicating a broader context which would remain unobtrusive in presenting models. After a little pondering I elected to use some kind of lightly colour-washed picture as a background, and the easiest way to get these pictures was to use CryTek's SandBox2.

I already had a fairly sizeable collection of maps that I had made, some for this project, some purely for experimentation and enjoyment, so I simply opened these maps, flew around looking for picturesque images and then screen-captured them.

From here it was a simple matter, using PhotoShop, to remove colour, add a second layer of pure colour and apply transparency to that layer until I had achieved the desired effect.

I now had my new image format which would communicate, over time and as the images became more numerous, the origin of the image (the IW project), the cultural relationship of the item pictured (the colour of the background) and the broader context in which the object exists (the Ilsamiren writing and the landscapes). 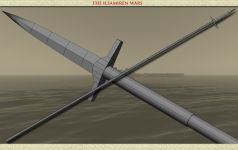 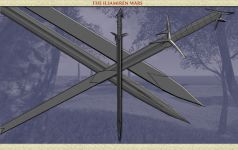 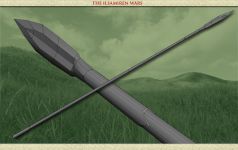 I hope this has been at least slightly diverting for those who read it. I plan to post similar descriptions of my process when I can!

The Ilsamiren Wars (M2TW)
Would be a shame if this mod is dead...
seems that somebody put a real big effort in this! But I think this mod should be for Rome TW !?!?
seems that this mod moved on to the cry-engine 2 (crysis)
maybe Ilsamir_Lord could put a info (https://www.moddb.com/mods/the-ilsamiren-wars/#1259225) !

You got a nice looking mod project

Hey I am VERY sorry that I cant really help you in making your two mods.I think that they are both progressing well and wish to say keep it up and good luck.

I can voice act for you if you still need any. I have a headset with mic. and know how to hook it up.