If you already programmed in COM, feel free to skip the article. Yep. Nothing interesting for you here.

If you're a coder that has some experience with previous game engines but you're new to Unity, then read on.

So. Two programs and a technology for software development. And a picture:

That's a COM object. Our target is "Outer Object". It imlements several interfaces, the circles labeled A, B ...

In terms of inheritance, you could do that by deriving the class describing. Now of course, there are some problems when all them interface implement a function with the same signature, say void Update(): which Update() should be called in your case? The one from A? Or B? Or C? I personally don't like C, as a vitamin at least it is sour.

This is where COM ... comes in place. In COM, if you want to implement an interface on an object, you'll get a new instance of a class. That means that somehow, in your objects, you'll have at least three class instances, one that implements the functionality of A, one for B, well, you get the point.

Why the frowned face? Oh, stupid me, I forgot something: from now on, your object is no longer an instance of one class. No. That's gone. Think of it as a collection of classes, each working together to provide functionality for one object.

In all technologies that implement an object modeling mechanism (yep, that's the OM from COM), there will always be a mechanism to go from one interface to the other. In COM, it is called "QueryInterface". In Unity, you GetComponent.

Now it makes sense. This is why the First Person Controller prefab in Unity looks like this: 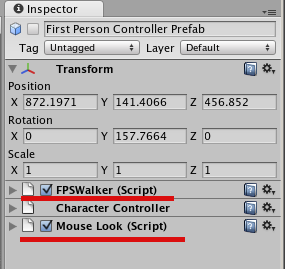 You'll see that I underlined two components (get used to the term if you plan to use Unity). If you double click them, you'll end up looking at some C# code. Each of the scripts describe a class, each having a Start() and Update() function. Several components, working to define one object.
And here's another thing about COM: you can re-use components: 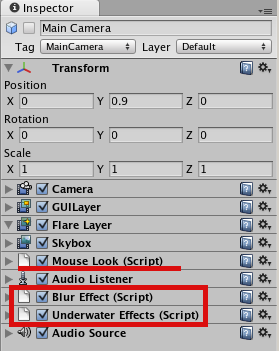 The Mouse Look script is the shared component here.

That's it. Don't say I didn't warn you, if you know COM this was not a surprise.

With or against the Russian Bears

Four steps to improve your code!

Why old games are better

Things you should not say

any future AVP2 mods/packs in the works?

Thank you for tracking our game - "somewhere"
we really appreciate the interest.

Thank you for tracking our game (3:00 am Dead Time). Remember that the new trailer will be available very soon as well as the first playable beta (for the funders, starting from 5 dollars).
Thanks for your support!

Hi there Alex,
Thanks for following Amp, Watts & Circuit! The full game is out now, you can grab yourself a copy here - Indievania.com
Thanks for supporting the game, I would love to hear what you think of the full version, and what you would like to see in future updates. Feel free to come chat to me about any ideas that you might have! It is built in Unity too so that might be of interest to you!
Thanks,
James Biddulph

Thanks for tracking my game Silas!

I heard you are no longer updating Savior patch for AVP2, is this true?

That's right. The game doesn't require an independent master server, it relies on Gamespy now. That, and the fact that we released the code to the public means that we're no longer needed. In a good way :) .

Okay and how can I implant this in my game? would i be able to use it to display say, a scene within a scene somewhere within a game to provoke more storyline information?