Just another person in the sea of people. :-)

So, are we gonna sing army songs or something?

so, are we gonna sing army songs or something?

So, are we gonna sing army songs or something?

Well I took the time yesterday to record the guitar licks for the main title of the mod (I don't have a name yet). I used my cheap gaming headset and ACID Xpress and quickly got a rough demo together. This is a very rough cut and a WIP. I've been working on the violin and banjo accompaniment and will be adding them together. This cut is more for my friend who is better at guitar. I've only been playing it for a month and he has offered to help by donating his equipment and helping round out the music for the mod.

I've been playing the the tempo. When I was first using ACID Xpress I didn't know what I was doing (hadn't used it since ACID Pro 3.0). I recorded all the audio at 1/2 tempo and ended up increasing the tempo through the software. That gave it some weird distortion. I doubt we'll be using it for the final version since the output bitrate is only 128kbs.

Still this should give you an idea for what the main title track will sound like!

Mmm. Wife soup. I must have done good.

mmm. wife soup. i must have done good.

Mmm. Wife soup. I must have done good.

Well, my wife said I could splurge and buy the Serenity Blueprints, but they're all sold out. I've been searching all over the web.
Right now I'm having to use the pdf that's just lowres promo material as a guide for the model/level.

As I've been working I think this mod is going to be a lot simpler than I first hoped. That's a good thing. Right now there are only going to be two modes (both are the same, just different venues).

Basically, you and your friends are in space (or crashed on a planet) and gorram reavers are coming at you from all angles. If you're in space, you have to go through the ship (with your friends) and close off all the openings while killing everything in sight.
If you're crashed you have to have Kaylee repair the ship (randomly chosen player will play as Kaylee with her wrench each time) while the rest of the team protects her.

As loyal brown coats, you and your crew has to whoop and hollar in a good old fashioned bar fight. No guns or weapons, just your fists, bottles, mugs and bar stools for as long as you can take it. Once everyone is down (your team), a random player will be chosen to play as river and up their score even more (while all the other players watch the action from the perspectives of the enemies).


Based on these two modes, I think the Left4Dead SDK is what I'll be using. All my testing has been in the Episode 2 SDK and it's pretty similar. The only reason I don't want to use it is that I have a fear of online AI optimization. I've seen the best mods out there do some great work, but I'm only one person. So Left4Dead it is! As the mod continues, I may add in some of my other ideas (instead of just survival), but I want to keep this vertical as simple as possible (3 to four levels).

I'm still working on the viewmodel for Vera. It's coming along, but the animation is a bit of a pain (at least in xsi mod tool). Once I have it ingame, I'll post up some videos and most likely create the mod with the name on ModDB. :-)

I figured out why bump mapping wasn't working in XSI Mod Tool. Turns out you have to use Mental Ray for testing.

Anyway, here's the clip for Vera (since I wasn't able to add detail through geometry). 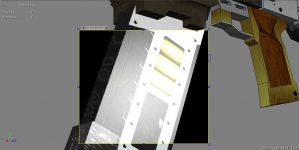 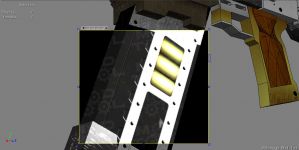 And now with the normal map 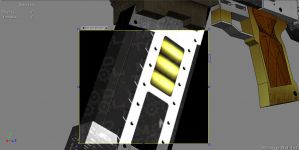 I hope this will look good in game!

See Vera? Dress yourself up, you get taken out somewhere fun.

see vera? dress yourself up, you get taken out somewhere fun.

See Vera? Dress yourself up, you get taken out somewhere fun.

After talking to some people in the forums, I decided to make the clip on autolock texture-detailed instead of in the model. While it would be sweet to see that kind of work in the model, I think this one is just about capped on triangles. I did manage to cut out about 100 of the triangles without much work. There's still room for refinement, obviously. The scope is coming along and I'll place it on the model soon. Hopefully it won't add too many triangles. 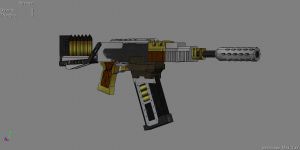 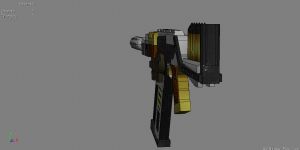 Now that this is done, the captain's pistol will be next!

It is my very favorite gun

it is my very favorite gun

It is my very favorite gun.

Well, the model is coming along quite nicely! It really needs some textures, but it is shaping out to be a pretty awesome gun (and rightfully so!). 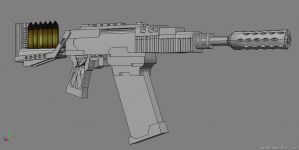 All that's really left is adding in the second rail on top and mounting a scope and D-LAP laser sight. Some extra detail on the gun body will be needed to. I'm trying to decide if I want to add detail to the clip with textures or in the actual model. Right now it looks pretty boring. 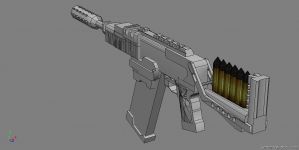 Once the scope is finished and the textures are applied, I'm going to start work on getting it into HL2. This may be quite a task, I'm not sure yet. I was looking through the models inside modtool and it seems pretty straight forward (should be easier since it doesn't have any moving parts like the grav-gun). We'll soon see!

BTW, let me know if anyone knows how I could improve this model.

So I just updated to softimage mod tool 7.5 and didn't think that all the model information was stored in the mod tool folder (which is an incredibly STUPID place to store that data). I back up all my user data every day with Mozy, but not my C drive information. Needless to say, all my models are lost. My textures are still here, but dang it I have to make the flippin' models a second time.

[Edit]
Whew, so it turns out Windows 7 (like vista) has "Previous Versions" and it was monitoring Softimage even though I'm stupid! Man, that was scary!

This is the best gun made by man.

this is the best gun made by man.

This is the best gun made by man. It has *extreme* sentimental value...

I'm working on a Callahan full-bore auto-lock, customized trigger, double cartridge thorough gauge weapon. I just finished positioning all the elements for the weapon (there's a ton!).
Here's an image the one used in the show and a higher def image of a replica which I'm using to rotoscope. 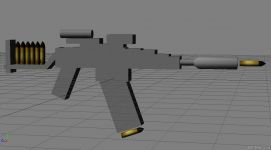 Currently everything is just primitives, except for the actual bullets/shells. I actually fleshed those out (and textured them for fun) so I could make sure the rest of the model would work (clip could actually hold the ammo, and bullet could fit through the muzzle). After just setting out the elements, I think this model is going to take a little longer that I expected :-) 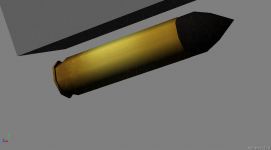 I say "bullets/shells" because the gun is a modified shotgun with specialty ammo made to look like rifle rounds. It's honestly more like a sniping slugthrower which sounds pretty wicked in my opinion. 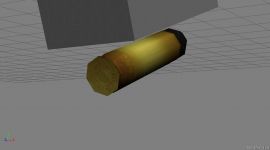 The blue sun weapons division emprinted on the bottom of the rounds is just a joke. I'm not sure what's going to be there, honestly.

All of my models are ending up being lower res then I would like (if I were doing this mod in crysis or unreal 3) , but I'm hoping that with good texturing and bumpmapping it they won't look like crap. One can only hope. If not, I can always go in and add extra detail, but that would be a real pain.

Ok, I posted my first work. It's a crybaby model (just a simple prop to get used to XSI). I am suprised how easy it is to jump into modeling and level creation. Still, it's just a simple cylinder with other elements tacked on. I have a feeling that my freetime is about to be disappearing quickly.

Here's a picture of the crybaby from the show 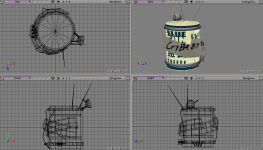 Here's the texture for the coffee can. 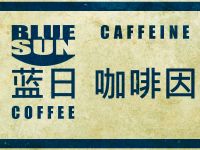 I also quickly made a parasol (shot in-show). This was turned out in under an hour (including researching the colors and design). 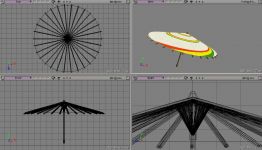 Here's the texture for the top. 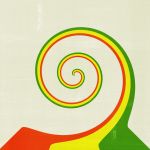 I Aim to Misbehave

i aim to misbehave

I Aim to Misbehave

I hate it when people start a new mod with just a text submission. It really drives me crazy.
They are second only to the kids that draw a bunch of gun ideas on a sheet of paper and then submit their mods.

I don't want to be like that, so I'm starting my mod first on my own (in psuedo secret). I think I have enough ability to get most of the heavy lifting done. I'm excited because my previous work had been in Jed (jedi knight editor) which was a subtractive editor. Hammer is really quite amazing to use.

Anyway, I'm not writing this blog post to generate hype or anything. I just really am doing it more for myself, so in a month when I look at it and I want to take a break I'll remember that there's still work to do. I made a "promise" or "oath" to myself to finish this project. But as of 4/18/09, nothing has been done.