I entered the world of modding in 2004 when I joined the "Padworld Entertainment" team working on the "World of Padman" mod for Quake 3. Apart from World of Padman having turned into a standalone game since then that's still what I'm working on today. When I joined the team I had no experience with the creation of game content other than fiddling with some level editors here and there, but I did know how to use 3d modeling programs. So the first job I got assigned was the creation of an intro-video for the mod. After I figured out how to get 3d models into Quake 3 I also started modeling and texturing mapobjects for the mappers to put into their maps. I also created three trailers for "World of Padman". One in 2004 together with Raptaker and two more in 2006 and 2007 on my own. At the moment I'm working on several things for "World of Padman" which I will talk about in detail once they are officially announced. ;)

Animating with the md3 file format.

This is a description how the md3 fileformat worked in player-animation in Quake 3 and still works in World of Padman. That is not exactly news, and if you're already familiar with it you can stop reading this right now. If you're not familiar with the system and want to look into animating with it or are just interested in how the game works this might be of value to you and can give you a basic understanding of the animation system. This is not a tutorial that tells you exactly what to do though.

There are a couple of differences to the way recent games handle animations and how Quake 3 did it. Todays games have the basic model that is loaded into the game and a (invisible) seperate skeleton that deforms each part.
This allows things like ragdoll effects, where the model reacts dynamicly to the environment. It also allows animations that only move specific parts of the model, like the arms in a shooting animation, while the leg bones play a totally different animation.
In Quake 3 and WoP all this is precalculated onto the model. The skeleton never leaves the animation program instead the position of every point of the model is saved for each animation step and exported. This leads to larger filesizes and undynamic animations. 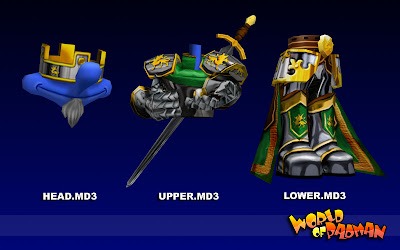 The three pieces of the PadKing player model.

Because of this, each model in Q3/WoP can only play one animation at any point. So what do you do if you want the playermodel to shoot and run at the same time? You could make a sepcific "shooting while running" animation. But even if you went ahead and tried to create a shooting animation for each case of standing, running, walking, walking crouched, crouched, and swimming you wouldn't have covered each case because you would need a version for each exact frame of that animation to have a fluid animation. And then you would only have covered the shooting, but what about switching weapons, playing a taunt etc.?
For this reason Quake 3 split the models into three sperate parts, the legs, upper body and head. 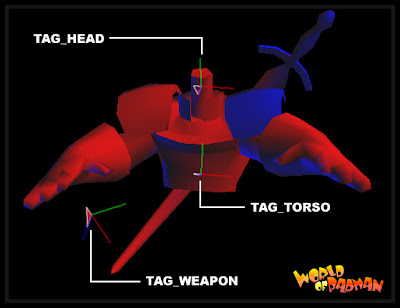 Each of them are connected with a "tag". For example the upper body model would have a "tag_head" positioned at the neck while the head model also got a tag_head where it would meet the neck. The head is now placed onto the upper body so that both tags align perfectly. If the tag_head in the upper body is moved in an animation the head adjusts to that and rotates with the neck. There are also tags for the torso and a tag for the weaponmodel within the according models. The head is not animated in itself at all, so only its position changes based on the torso model, there is for example no animation for a mouth. This is not a limitation of the md3 system though, it's just how Quake 3 and WoP use the system and I guess it could be changed by a coder. 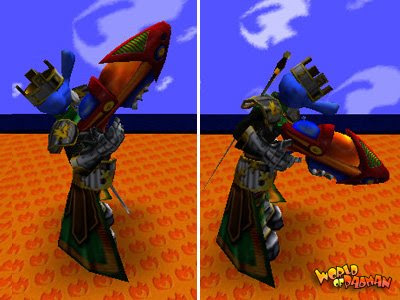 Secondary animation added by the engine.

With this system in place now the legs play the running animation while the upper body plays the shooting or idle animation. Which is a big improvement over Quake 2 which only actually played one animation for the whole model as far as I know, so players didn't have a shooting animation when running, there just appeared a shot from their gun with no movement of the arms.
The disadvantage in Quake 3/WoP however is, that the upper body doesn't "know" what the lower body is doing. So you won't see shoulders or the head moving together with the running animation like they would in reality.
For WoP this means that Padman's cape can't really be animated because real animation would happen when he jumps, runs, or swims which are all animations of the lower body, not the torso/cape. The reason why you can't just define the cape as part of the lower body is that there is also a bit of secondary animation that Quake 3 adds automaticly. If for example a player looks up the torso model is rotated back a bit and the head rotates into the viewing direction. If you would put the cape into the leg model now it would fit the upper body IF the upper body looks straight ahead, not up or down or to the side. Once the torso is rotated the cape would still stay in place which would just be broken. This secondary animations of looking around etc. ads alot of life to the characters which do have a stiffness problem already with the upper body not really reacting to running animations etc. so you probably wouldn't want to make it worse by cutting this secondary animation out even if a waving cape would be pretty. ;)
Doing a strong random waving animation for the cape could maybe work ok for standing and running if you get it just right, but once you throw in running backwards having to use the same animation you can just forget about that. ;)

As I mentioned in my post about the PadKing model which I created and animated for WoP I made up the model specificly to allow a cape animation by putting a belt around the cape keeping the upper part still, while the lower part can be animated with the legs. I also put his sword on his back so he can grab it and wave it around as a taunt which wouldn't be possible if I had put the sword onto the lower body, like the sabre PiratPad carries for example.
If you want to complain about the sword just hovering on his back, there's a magnet hidden under the his cape which is just strong enough to hold it in place btw. ;)

I hope this post helped a bet if you want to look into animations for WoP or another tech 3 game.

The creation of the PadKing player model

Changing heads in World of Padman

Welcome to the [PAD]Community. This is a group for WoP players and fans on IndieDB and ModDB to join and to find out what is going on in the World of...

From the earliest PadMaps came the mod PadWorld, and now from that distinguished provenance comes the next evolution, the World of Padman Standalone...

Our mission is to bring the Christmas spirit, even more fun and silly hats into the World of Padman.