Hey everyone, I'm working on a 2D pixel art wizards action platformer called Wizardier! I thought I'd show it at this early stage so I can get feedback as I go! Here's a screen shot 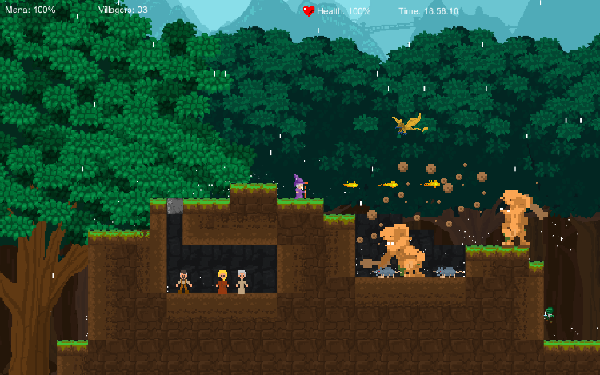 The player is a special type of wizard from an ancient order called the "Wizardiers", their role is to protect the villagers in the kingdom using their magic. The game starts though after some of the wizardiers have turned evil and killed all the other wizards in the order apart from you! It's now your quest to protect the kingdom, moving from village to village fighting off hordes of monsters and evil wizards any way you can. 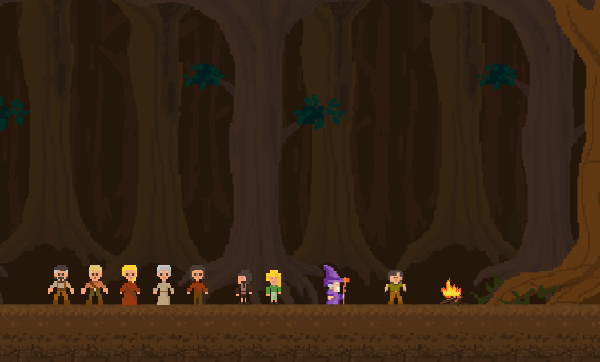 I'm a big fan of the old game Defender, where you job was to protect those little people, I want to create something similar with Wizardier but with also elements of Terraria so that you can actually dig down and create caverns and places for the villagers to hide.
Each of the villagers will have their own fear value, which determines how they act. The higher their fear the more agitated they become making them run around and generally be difficult to manage! so part of your job (while fighting off hordes of monsters) is to try to keep them calm. In the above screen shot the wizard has created a fire which causes the villagers to gather round.
Their will be different types of monsters that behave differently and offer a varied challenge to the player. So for example rats are easy to kill but they can create tunnels into where you have the villagers hidden, Ogres are slow moving but can smash apart large parts of the scenery and goblins just jump around and make a nuisance of themselves!
It's early days yet and there's still lots to do, but I've got the wizard running/flying digging/building and some monsters and villagers in. My first big goal is a 1st level demo, which hopefully I'll have done in about 1-2 months from now. I'm doing all the coding/graphics myself but I'm working on it full time so hopefully that's a realistic timescale. Ultimately it would be great to get this on Steam early access. Between now and then though I'll be posting images/.gifs and how the codings going. I'll be updating here, and also on IndieDB, and my own blog at www.biggerplay.com as well as numerous tweets! ( @biggerplay )
Let me know what you guys think, I'm always open to feedback and ideas!