I'm just an average guy, who attends university IT classes, while going to regular high-school, also making a random little game Project.
I'm adept in Java, C#, and C++, and Dabble in a little HTML/CSS/SQL

Deserts, Trees, and The Apocalypse

Well, what an interesting week it's been!

Rees (UniformSierra) and Matt (Langutan) have joined us here on IndieDB, and Rees and i have been discussing the storyline of Rathguarde(which looks fantastic at the moment), which he should be doing a post on in the not-too-distant future

The success of Rathguarde thus far has astounded me, at one point Ratghuarde hit 107th place, and Flashfire Games hit 88th Place! Considering that we've only been on IndieDB for about 9 days, quite frankly, I'm impressed.

With such success, people have been giving us some positive feedback on the game, and how they're keen to see how it unfolds, as well as some people offering their services to us!

For Alpha 3, we've got some interesting things up our sleeves (8 sleeves together tend to have quite a few things up them), and the current task I'm working on is the addition of trees (and their various byproducts). For these trees, we decided not to go with generic green trees, but with more interesting concepts. These concepts were fueled by the decision to make the "fuel source" for the game Amber - a new thing that will work in a similar way to Coal in minecraft -. This will be a yellow gem-like stone, which will be quite common underground, but mainly will be used as a light-source. But what about the poor elves? They will be reluctant to go underground in search of Amber, so instead we decided to bring the Amber to them. So we decided Amber will also grow on trees. How will that work you ask? Well, the art will be inspired by the Magic: The Gathering card Grove of the Burnwillows: 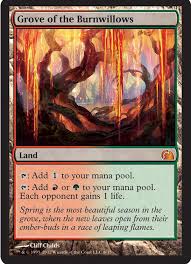 This will hopefully turn out to be just as spectacular a sight in the game, and should help "spice up" the look of the game a bit.

Also, after a bit of an argument with Shaun, i finally gave in, i will be adding a Sand block to the game. Here's pretty much how the argument went:

So yeah, Sand is confirmed. +1 to Shaun.

Meanwhile, I've also been doing some "surveillance" and "espionage" over the last week, checking out our competition. And to be honest, there is some absolutely spectacular looking games around at the moment! My 2 favourite new games right now are Steam Marines and A Nation of Wind, excellent work by those guys!

Also, my thoughts have once again drifted towards the impending apocalypse. I find this to be both an interesting issue, and a controversial one. I at least, believe it is a very possible outcome, and despite what others may think, is a perfectly valid event to take into account when making decisions. But also, I'm not planning stuff around it, it's more just an interesting thought to keep in the back of my mind. So what do you guys think? I may post a poll or something, to see what other peoples opinions are on the subject.

Flashfire games is a bunch of high-school guys in New Zealand, who love programming and Games! Currently our project is making a game we call Rathguarde.

Right. But I was trying to find the link to the alpha. Eh, to hell with it. ;P

ok, here's the link to Alpha 1 (but alpha 2 will be up within the next day or 2) Indiedb.com

Your game looks extremely interesting, but the graphics a lot like Survivors of Ragnarok. I'm quite curious to see what it's about and how it plays!

Thanks! yes the graphics are fairly similar to SoR, they used to look almost identical, so we changed everything around, and turned Rathguarde into a desert planet to avoid too much similarity/conflict. Thanks again :)

Is there a link for the alpha?

yes, the link above the comment section, is to Flashfire Games (the company), under which you will find Rathguarde, and then go check out the downloads page :) enjoy.

This maybe is stupid, but I only see two fontsquirrel links... :(

uhhhh, yeah the way indiedb does the links, the second one looks the same, but is actually different :/

It's to a "Free Font Silkscreen." I am so confused right now.

fontsquirrel is a free-commercial-use-font database, where i found Silkscreen (the font im using in Rathguarde)