Desura is a community driven digital distribution service for gamers, putting the best games, mods and downloadable content from developers at gamers fingertips, ready to buy and play. Welcome to the official Desura BLOG.

The idea behind alphafunding is simple, fans get instant access to their favorite games with the understanding that the game might be buggy and isn't complete - but frequent updates will add polish over time. The developers can then fund the games continued creation, giving supporters early access to the latest and greatest content.

It is essentially crowdfunding (like Kickstarter, Indie Go Go, GamesPlant or 8 bit funding) only with instant rewards for players and developers filling the void between the idea and the pre-order / release phase. Digital distribution is an amazing medium for getting access to content early, so while alphafunding isn't for every game, why wait till release to fund your game, when you have fans wanting to support you every step of the way? It is a model which has worked extremely well for Minecraft, Overgrowth, Natural Selection 2 and others, who have benefited from their fans support from the very beginning. 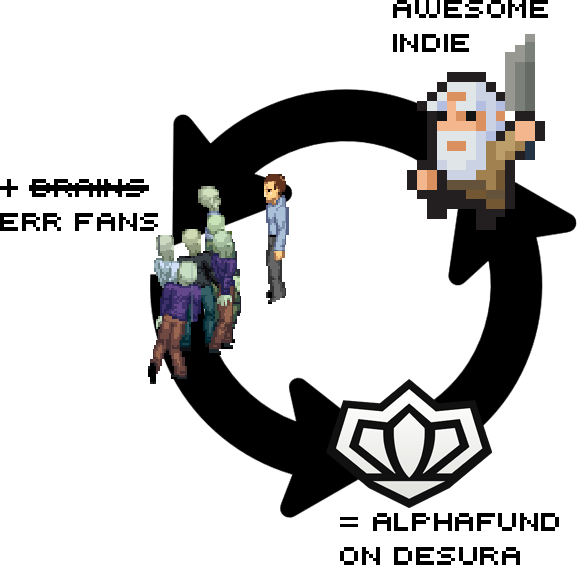 Today on Desura we aim to make alphafunding easy and launch with 5 excellent titles, each for different tastes. We've got Project Zomboid a zombie survival game like no other, Survivors of Ragnarok a city crafting game inspired by Dwarf Fortress, King Arthur's Gold a 64 person multiplayer pixel battle royale, Wyv and Keep a puzzle solving classic and Rotion a challenging ambient indie puzzler. 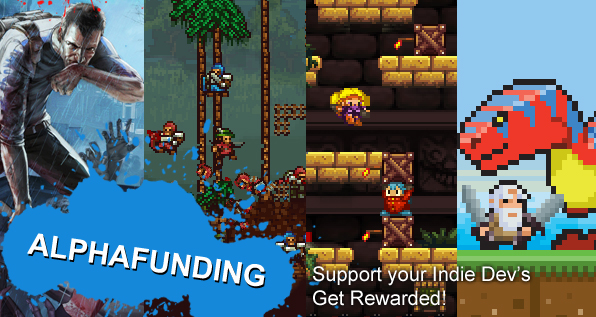 There are a lot of risks involved with alphafunding so not every game is eligible... but if you are open about your development, want to give and get support from your fans then get in contact and let us know about your project.

Yay!
I have supported Minecraft, Overgrowth, Caster, Silas, Survivors of Ragnarok and Crystal Catacombs, and NO REGRETS so far :D

Nope. For some reason, that game never caught my interest.
Try and convince me, though, and I might give it a chance :]

Did you see how long you played?

Project Zombiod is quite creative and is an enjoyable zombie game. It is pretty unique!

Mate its like the best Zombie survival ever made. You can make fotress, barricade windows, find cool wepons and kill zombies, craft stuff and use tons of supplies to survie. The latest update will involve a bigger map, skills and let u team up with NPC to Defend, Help and Trade. But wait u cant forget the brand new Graphics which will also come out soon in 2.0 :)

If I were you I would download the demo It's a great game once you play it at first you see it and think it doesn't look that great seems okay... but believe me I played it and I find it a great game it's a bit like DayZ just the graphics are different by alot!

Dayz is a bit like it, PZ came out WAY before dayz :)

I supported Minecraft and Overgrowth :)

Very interesting ! I will send you a mail then !

Great initiative and good use of Desura. I will surely support some games this way over time.

Damn that is a sexy cast of flagship titles if I do say so myself ;)

always about the money, what about the dedication and love for doing something? my motivation is people liking and playing my games and returning very nice comments :D

Yes, and this is how we as gamers may return the favour. Yes, Notch has been a lazy pig, and a real moneygrubber, but some people actually need funding to be able to focus on making the game glorious, rather than wasting time in some burger joint :)

Yes, but if they had no money they cannot develop the game.

Well, that's not necessarily true.
But I still like to show support to my favourite form of entertainment, when people really put effort into making something for us to enjoy :]

u can develop the game without money.

So your game is taking too long to develop this makes you get mad because people aren't giving you money yet so you stop developing your game which just justify's the fact your just in it for the money.

programming is something that just requires time (it has nothing to do with money, same with modeling ,animation and art these all don't require money to work on just your own dedication and love)

We are Indie developers for a reason, what we create is better because we do it in our own times with allot more dedication then just a price tag. But that's just me.

You won't get far developing a game without food.

You won't get far developing a game without electricity.

If you're working full-time to pay for the above you don't have much free time - sure it might get finished eventually, but if your players want to see it finished this decade you need a way to pay for food and electricity while also spending lots of time on development. Alpha funding allows this to happen, and I'm proud to be supporting it :)

Yep, it's all about the food, electricity, rent and such. If all these things were free, I'd make games and put 'em up for free - relying solely on things like Flattr for teh monies. However, food and especially rent are *not* free, so if it's a choice between charging for what I create, or being unable to devote enough time to the project, then I'm charging :P.

In resume - not all of us live with our parents anymore.

You know, stop solving what does not need to be solved. What is so bad on being paid for your hobby? Does not the prospect of recieving money for what you do for fun in your spare time intrigue you? Is it that bad?

And you have to look on a complete different aspect of paying indie devs. It is a means of protest against the big companies and a lot of "not nearly as good and fun to play games as were made before" they produce and demand being paid for.

a lot of people do this full time... how do they pay for rent or food? just give them the 1-5$ (average indie game price)

Besides, what would make you entertained longer, a movie for 5$, or a game for 5$?

This comes up when we are about to release. :P Oh well, let's hope people will still enjoy our game. =)

Sounds good -- I just hope no devs take this to mean that it's better to allow for a cheaper pre-order alpha version than releasing a demo.

Why not both? That's what I did.

Awesome, looking forward to see what games will be using alphafunding as the desura platform keeps maturing.

YES. This is what indie really needs that Steam cannot and will not offer those developers. I like this idea a lot. I hope it picks up and gives Desura the niche market it needs to stand out.

Well, Maybe next time though.

Are there any limitations to this in terms of the technology being used to develop the games? For instance, we are using the UDK. Will that pose a problem?

I don't think the tech matters at all - anything is deliverable by Desura.

if i ever find a coder and a team i can trust to not jump ship I will be in contact. :(

Thankyou Scott and the ModDB team for finally implementing this. Its so awesome to see this, and hopefully it'll cut down on people using Kickstarter ect on this site because it impacts negatively on the community with them doing this. If its through desura then the entire community benefits from it and everyone is protected from potential scams that do very much exist on services such as Kickstarter.

I'm expecting good things from this. Best of luck guys.

Well what if you are making games full time and want to be able to eat food?

Project Zomboid: Amazing game you got there.

Forget Desura, a-holes had the gall to launch a video advertisement when I launched an indie game demo. That advertising money better be going to the developers.

That would be a add for new content on Desura. We make no money from that. There are no add on Desura.

Great idea. Desura is on the ball. Keep up the good work.

So far, indies are pwning other major Companies with awsome games like Minecraft and Project Zomboid :3

Ive bought the Project Zomboid game and im loving it. i like seing how it`s gradually changing with every patch

Project Zomboid and Towns are two games that are on my list. I'm getting both soon enough (tried and loved both the demos), and will continue supporting devs through Alphafunding both as a gamer and a future wannabe Indie developer, as it opens up great opportunities for most developers. That's why I love Desura :D

Don't mean to sound stupid,but I haven't actually read it anywhere,when you alpha-found a game,are you actually "Buying" the game,or will you have to pay more once it gets oficially released?. Thanks in advanced.

You're going to receive a copy of the finished game AND get access to the pre-released versions.