Zoo Base is a the spiritual sequel to Star Zoo(2002) which was developed by Tarn Adams of Bay 12 Games with more major differences than similiarites. The game takes place years following the events that occur at the ending of Star Zoo. Dr. Kozmo is tasked with creating suitable habitats for displaced alien species. however, underfunded and overworked the frustrated doctor begins to question his morals and the viability of his research. This leads to conflict and an inevitable backlash both politically and locally. The gameplay is built around an interactive-fiction game engine while also representing some elements of what a rogue-like is in essence. The premise is to unlock the secrets of 20 alien species. All the while maintaining Zoo Base's limited supplies and dwindling staff. Zoo Base is to be an ongoing project.

Aiming for Misadventure: The Story Behind Zoo Base

Zoo Base (tentatively subtitled “A Pan-Galactic Misadventure”) is a mixed-genre game with strong ties to the oldest schools of gaming. At its heart it’s a roguelike and an interactive fiction; a role-playing game and a text adventure. But it’s also a management game, a shooter and a collect’em’up - all played in a terminal window with an entirely text-based graphics engine. These disparate elements will be united (we hope! -Ed) by deep simulation and strong writing.

We've set ourselves quite a challenge by making a spiritual successor to Star Zoo: a game which is Lohan-crazy and harder than my nan. Star Zoo (2002) is a bizarre and often infuriating collection of mini-games stitched together by its B-Movie story, lit up by pulpy neon 8-bit graphics and a masochistic difficulty level. You can download and play it for free here. Tarn Adams (Dwarf Fortress) built it over a sleepless 36 hours while waiting to catch a train. 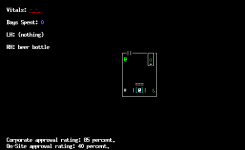 A look at the roguelike portion of the game. The handsome
white @ is the Chief of Operations of Zoo Base (that's you!)

At first glance, it’s not a game which screams for a sequel to be made. Perhaps some skeletons are best left in the closet. But when Chris approached me with the pitch - that the player would have to run the Zoo Base at the behest of a manipulative, shadowy corporation - it didn't take long to see the potential of the idea.

There's a simple but effective collection mechanic, finding and researching twenty animal species. There's a sci-fi management setting, running a space-base full of alien creatures and shady dealings. Then there's the screwball sense of humour and almost infinite story-telling possibility - there are almost no limits to what we can do (a fact helped out by the text-based visuals: character’s words are our polygons, the player’s imagination our graphics renderer). The mechanics almost started to write themselves, and before we knew it, we were facing a bigger game than I think any of us really signed on for.

We've focused the ideas down into a reasonably simple premise: you are placed in charge of a top-secret research facility (or at least, it starts off that way) in the far future of the galaxy. The facility is run by a ruthless uber-corporation called ConOrbital, and staffed by a variety of sub-contracted corporations. But not all is what it seems on Zoo Base: and the deeper down the research tree you delve, the closer you get to realizing ConOrbital's sinister ambitions and the greater the ethical challenges the you have to face.

Adding to the management cocktail is the influence of diplomacy: a number of rival (or otherwise hostile) corporations and organisations have an interest in Zoo Base's research. The player must fend off attacks from enraged alien species, defend against sabotage from rival scientific institutions, and keep ConOrbital, the owners of the base, happy with the rate (and cost) of progress. 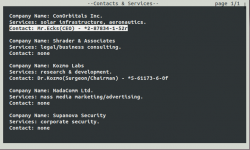 Basically, if you were to pack a running build of Theme Hospital into into space, on a rocket packed with LSD, then Zoo Base would probably be the game which crash-landed into the Antarctic fifty years later and demanded to see your leader.

At least, that’s what we’re shooting for. Right now we’re working to get some the gameplay implemented and generate some support. Later, we’ll be layering sophistication and complexity to make Zoo Base as compelling and textured an experience as possible.

Zoo Base has been in development for a good few months now (six to nine, depending on how you look at it), and we’re starting to spin out the core ideas and story into something pretty darn interesting. Hopefully, if we can generate enough support, we’ll be able to finish our vision and share it with the world.

I’ll be back next week to talk in more detail about the core game mechanics. In the meantime, thanks for reading!

An Introduction to Zoo Base

The Zoo Base is a top-secret research facility which patiently ticks away, waiting until it is ready to change the face of the galaxy forever.

Indie
Twitter
Tags
Embed Buttons
Link to Zoo Base by selecting a button and using the embed code provided more...