The final game will have no leveling, meaning that the player has to rely entirely on scavenging and collecting good items.

The reason I say high modability is that players will have the opportunity to create their own world layouts by creating a simple .txt file in notepad - and depending on what number put in the txt, the world creation will place different kinds of cityblocks (residential, stores, to mention two of the many type of "blocks"). Each type of blocks will at the first release have atleast 8 different variations.
Furthermore I plan on adding the possibility to add your own skin for your player.

CURRENTLY ALMOST ALL GAME FEATURES ARE IMPLEMENTED - and are as follows

I am a single developer using Unity, but if I can keep up the pace I am currently developing, there will be an alpha release available within the next couple of months.

First off - the following new features have been added to the game:

Before I go any further, if you want to see these pictures in their original size 1920x1080 - then right click them and click view image.

So, first off, before going into these 4 features - heres a picture of the new menu as it looks now: 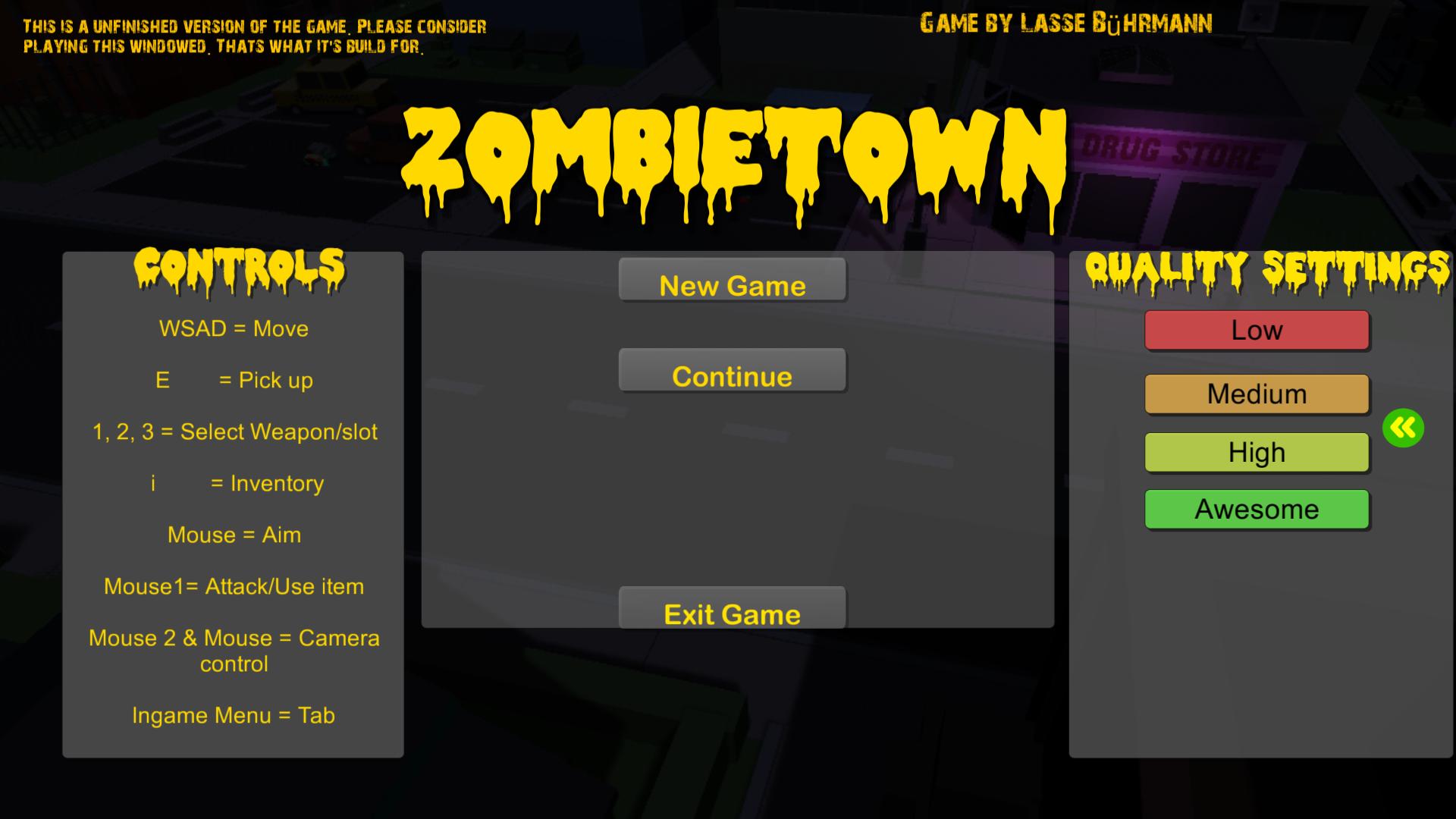 Now, SKIN SELECTION is basicly what it sounds like. Being able to select between multiple skins when starting a new game. Heres a couple pictures! 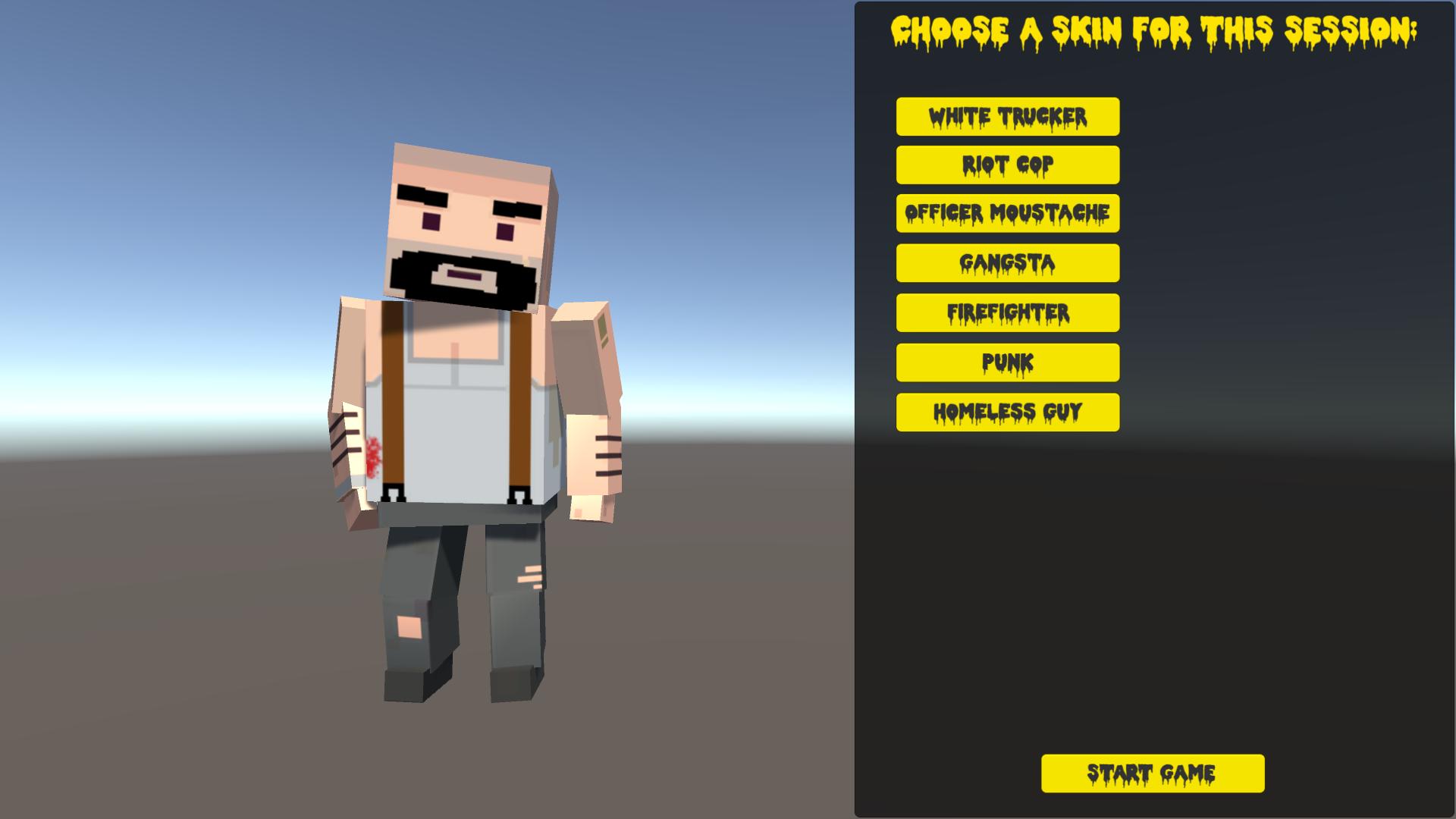 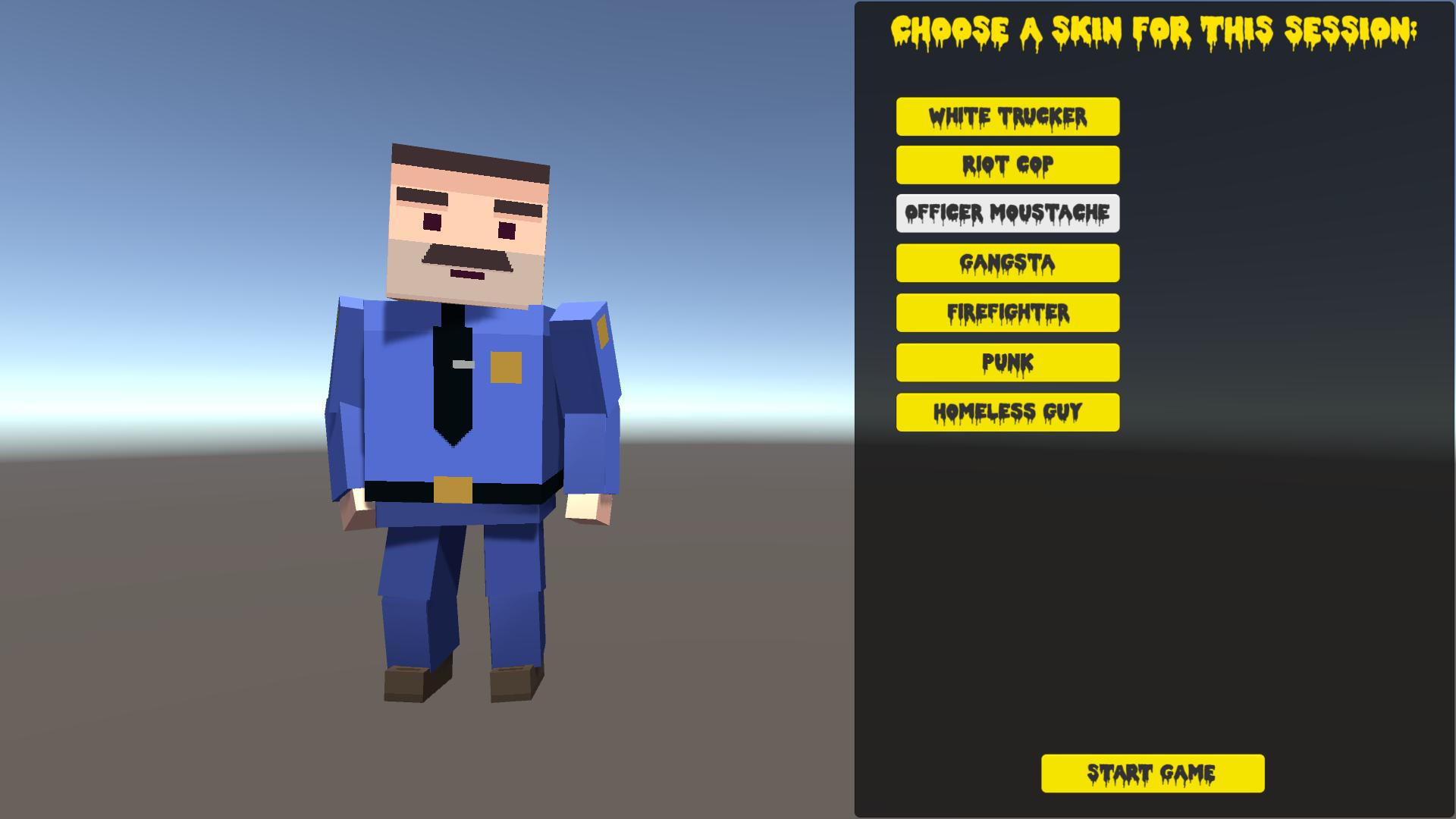 Now SAVING AND LOADING is again pretty obvious. But heres a twist! The game will have no multiple saves. It simple saves the game when you exit while being alive, and allows you to continue the next time you play. It remembers your weapons, items and position.

PLACEMENT KITS! Basicly, these are kits that can be found in the world, that when "consumed" (used thru inventory) place an object in front of your character. These kits contain stuff like, campfires, barricades, fences etc. They will have a seperate news update when I get further along with making them. They are already implemented, but they are visually not really set up yet. 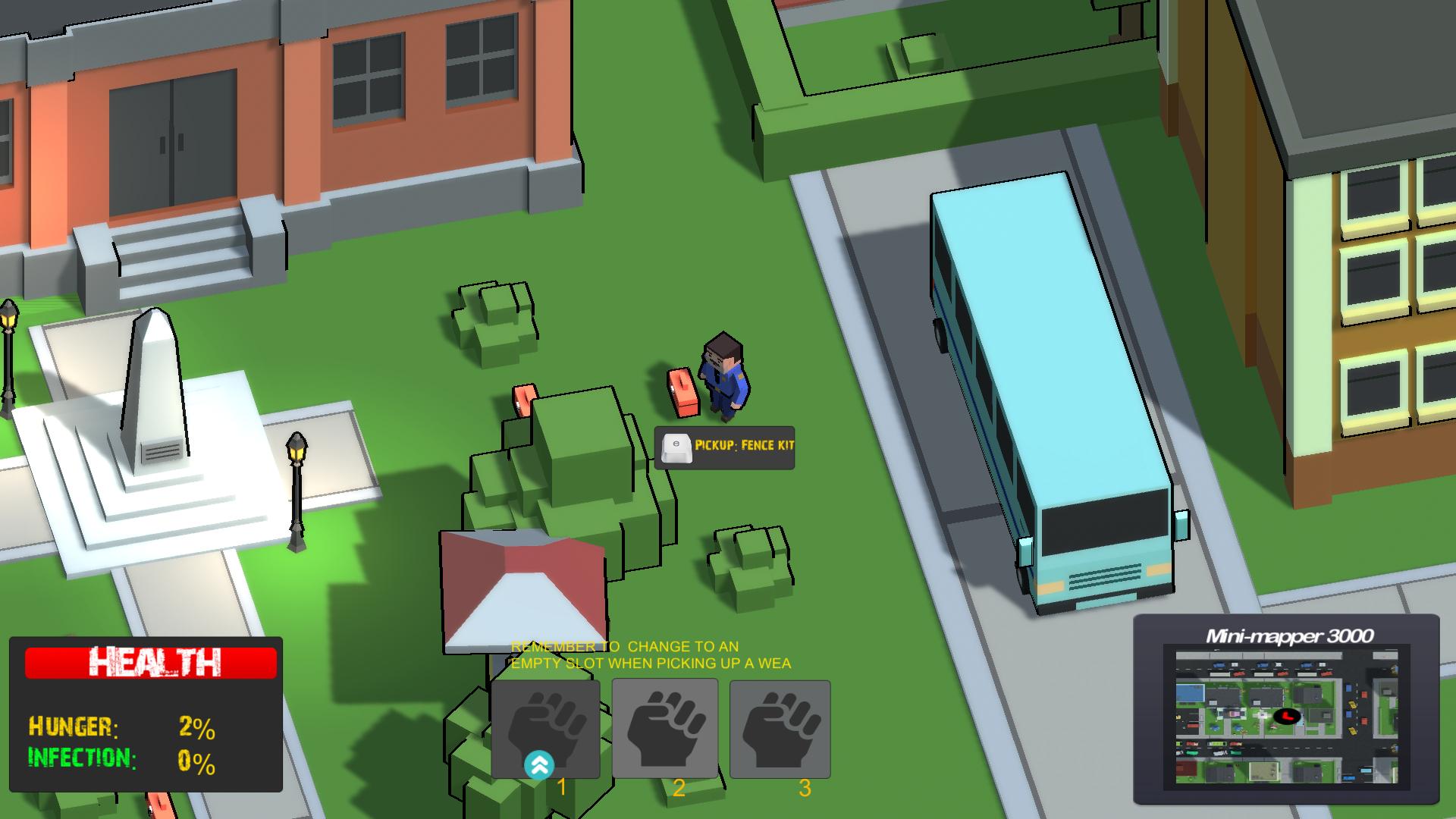 Thats it for now. But to send you off with a proper "see ya" , heres a pic' of what the roads look like now that I've populated them a bit more. 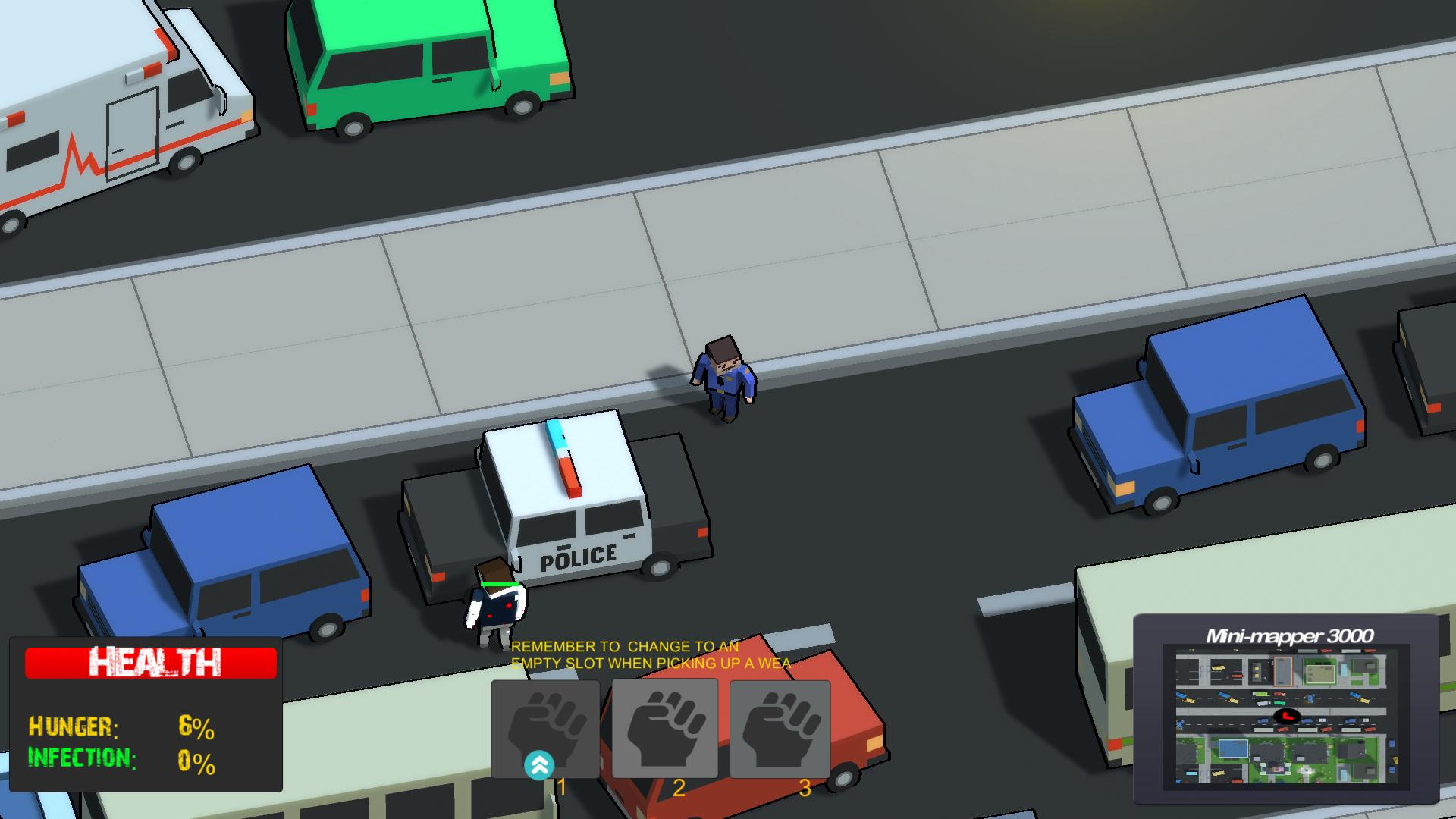 Update on Weapons and loot + more!

A small news update, about the progress of adding more weapons and loot to the game!

Small news update about my progress making the game's world more varied & and making scavengable objects for the world.

A list/display of the games enemies & playervariations that will be updated as new ones are added.

- A quick update about loot i'm adding... Amongst others a new ranged weapon has been added.