In the land of Zenozoik, the city of Halstedom is ruled by a powerful clan, one which Ghat has betrayed by committing a terrible sin. Now, Ghat's brothers and sisters are pursuing him and his companion Deadra through strange and twisted lands, beyond the boundaries of the sane to the ends of the world. What was Ghat's crime and why did he commit it? The bare-knuckled brawl to reach the truth has just begun. A fascinating world of grotesque beauty--Equal parts breathtakingly beautiful and utterly disturbing, prepare to be swallowed up in a surreal fantasy world powered by the Source engine. Explore lush environments and confront bizarre animal-humanoid foes on your mission of discovery and redemption. Visceral first person fighting--Combat is up close, personal, and entirely satisfying. Start with a series of punches, kicks, and grabs, follow up with a knee to the enemy's face, and hit him with a finishing move to send him flying yards away. Learn new moves to mix it up. 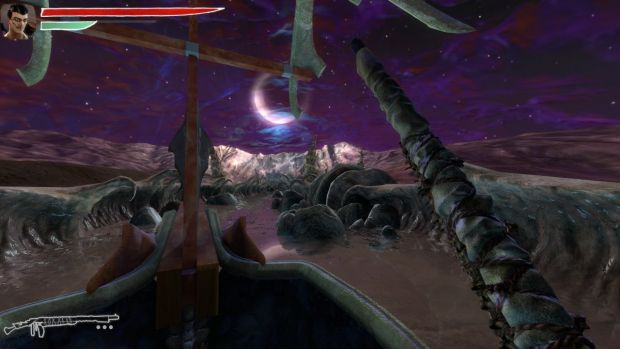 You made me laugh.

Nothing better than night time bass fishing with your trusty rifle!

One of the coolest screenshots to date! xD

This part of the game was so boring D:

hah yeah I couldnt wait for this part to end but the scenery was so awesome. (At least you get a cool rifle and get to 1-shot guys when you're here)

I thought this was a wonderful part of the game! Zeno Clash <3 Awesome