WOODPUNK is a fast-paced action game, set in the Middle Ages but using futuristic weaponry and tools. In WOODPUNK, the player can fight against well over a hundred enemies onscreen at a time, using over 1400 different weapons, which are generated procedurally by the game from unlockable weapon parts. With both melee and ranged combat, random and fully destructible levels, several game modes and co-op multiplayer, we are sure that it will be widely enjoyed by any action game enthusiasts out there!

Today we explain how we approached the development of our tech tree. Different branches will allow the player to experience different place styles. Thanks to the tech tree we hope to also promote replayability

Today we continue with our weekly report on how we approached content creation in WOODPUNK. We are on heavy crunch mode as we get closer to release (coffee, stat!), so we are more comfortable explaining how we approached development. This week we’ll talk about developing the tech tree 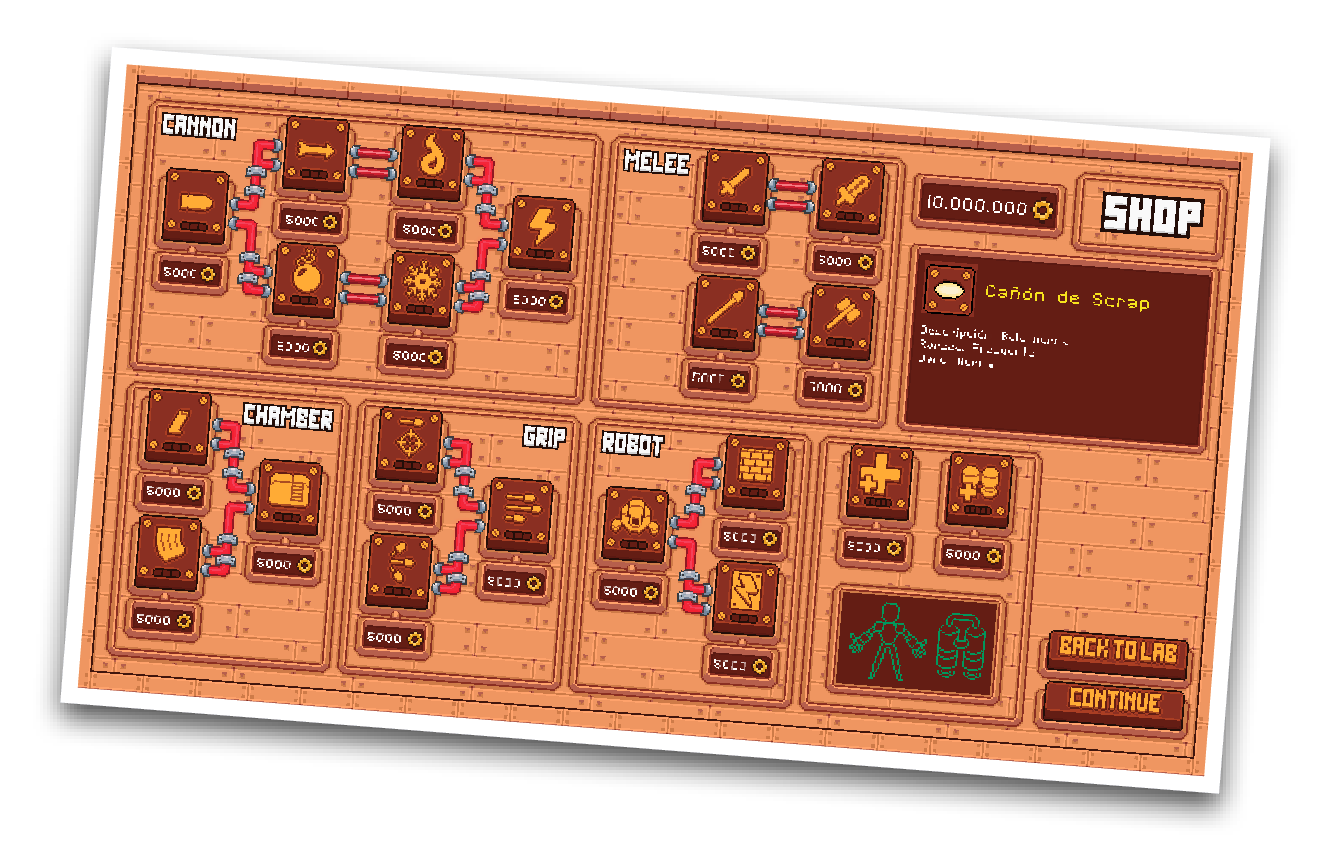 So at first the tech tree was not the focus of our efforts. We preferred focusing on developing the core mechanics of WOODPUNK, to later develop content around it. As you can see we created a working place holder where the player could develop the weapon’s different components, but there was no strategy linked to the skill tree or connections between different components. To invest into the skill tree, players would first have to recollect scrap by killing enemy units. Once we were satisfied with the game’s core mechanic, we started further developing the tech tree. 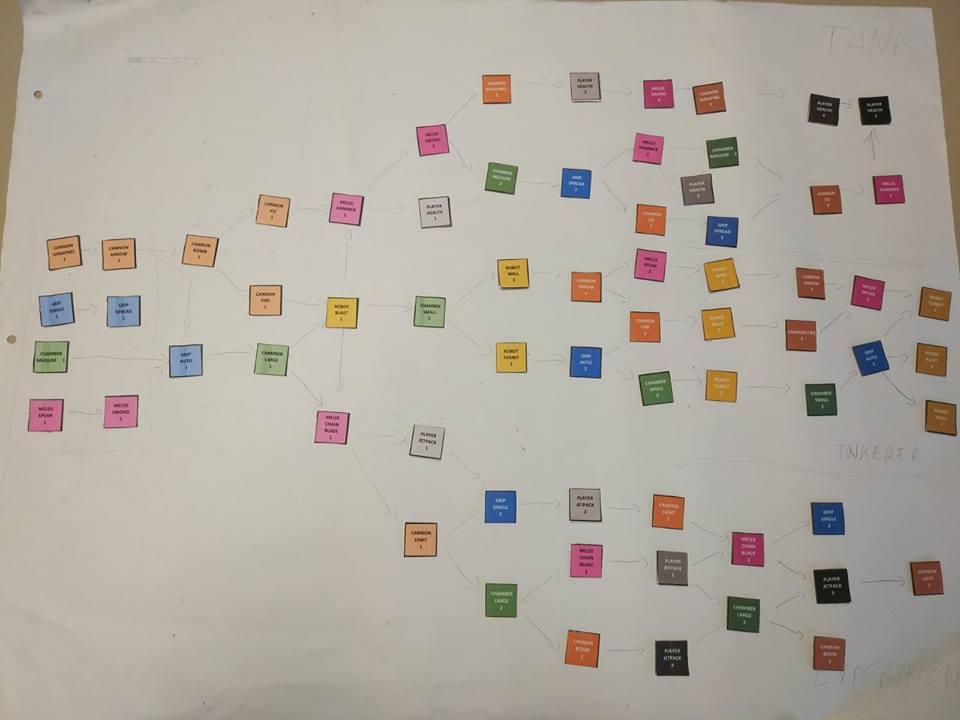 We are big table top fans here at Meteorbyte Studios, and we could not miss the opportunity of using our table top skills in developing the tech tree. Visual aids are the best, so we cut little cardboard pieces, each one representing a different “technology” component into which the player could invest their scrap. These cardboard pieces were color coded to add simplicity and to help us create connections between different technological branches.

As we mentioned previously, we want the players to be able to have their own play style and create their own strategies. We created 3 branches, one where the player could increase Aquinas stats, another where the player could use scrap to better Theo’s skill and finally a branch to better Aquinas’ mobility and create experimental weapons. By creating these different play styles we also aim to promote replayability as players will be able to try out new styles.

The first branch is called “Tank” because it’s focused around tank stats (#noshitsherlock) which will help Aquinas fight in short distances. This promote the beat’em up play style so famous in the early 90s. By developing this branch, the player will earn the “War Hammer” which heavily damages bosses and enemies in an area, increase the damage which the ice bullet does and increase the max stats. By doing this players will be able to freeze enemies, and proceed to bash them with the war hammer. This is a risky play style, so we gave these players the possibility of increasing their maximum health to compensate for the risk.

The Tinkerer branch focuses in developing Aquinas’ companion, Theo. Theo will support Aquinas throughout his fights by providing new weapons when the player doesn’t like the ones he was given or he wants a strategy change. Theo also possess strong skills which can easily determine the outcome of a fight. Theo can create a wall behind which the player can protect himself or shoot. Theo can also explode in a big area of effect which destroys enemy or transform into a turret that that shoots at will if commanded to. A player can choose when to use these abilities, but Theo’s IA is in charge of choosing the position his skills or choose who to damage. In multiplier mode, the second player can choose who to target or where to position Theo’s and his skills. By upgrading this side of the tech tree, Theo’s skills will do more damage, and last for longer! 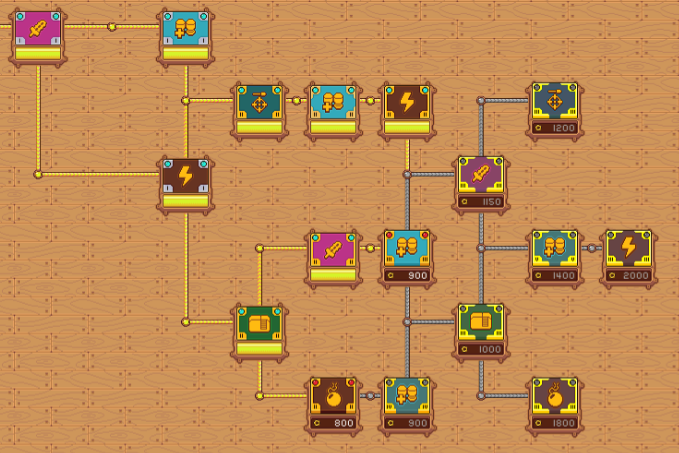 The Experimental branch is where Aquinas unleashes his creativity and allows the player to improve his jetpack in order to jump around for longer. This branch is also called experimental because if the players dive into and invest in it they will earn the Light Cannon, a weapon that pierces through enemies, and the Chainblade, an automatic melee weapon. 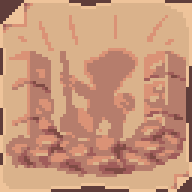 We want to attract the player to the tech tree and give them a reason to develop it as a way to promote replayability. Therefore we created several different achievements that are easier to “achieve” if the player develops certain branches of the tech tree:

Well, this in an intro into how our thought process when creating the tech tree and what we want to achieve with it. If you want to ask us any questions on this subjects join our discord server!

See you next week, when we'll talk about the different game modes we're developing for WOODPUNK! 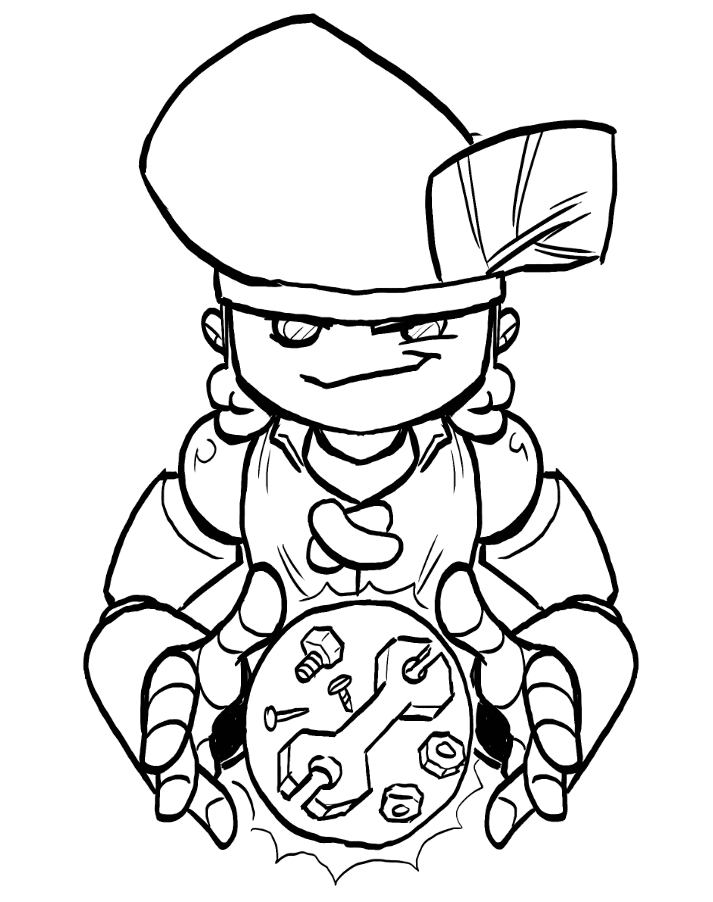