“Welcome, outsider, to this distant land

of fire and water and all-conquering sand...”

Wayfarers: Call of Osiris reignites the love of classic archeological adventure! Jack and Leila Dawes, a married American couple, travel to Egypt and get caught in the middle of a war between age-old deities. In this story-driven third-person adventure, you take control of the soldierly Jack and challenge the evil god Set, with the help of your wife, the erudite Leila. Set had killed Osiris, the rightful and benevolent ruler of the underworld, and taken the throne for himself, which simply will not do. Jack is a fighter, Leila a scholar, together they’ll fight Set, and tighten his collar!

In the quest to help Osiris reclaim the throne, you’ll raid tombs and (fun!) chart edgy underworlds, jump and cross chasms, solve puzzles, shoot bad guys and monsters, defeat giant bosses, and finally kick the evil Egyptian god’s butt so hard he’ll cry for his mummy! This game offers a unique blend of the new and the ancient, where you visit faithfully recreated temples and pyramids in modern-day Egypt, as well as delve into magical underworlds where everyday rules no longer apply. This single-player-only game offers 12 to 15 hours of story and gameplay, with the added bonus that you can return to levels to find more collectibles or change the difficulty.

You’ll explore real temples above ground and the interiors of famous pyramids, as well as vast underworlds that lie inexplicably beneath them. Here, magic seeps into reality and makes the impossible possible. You’ll traverse cliffs and slopes, cling to edges and ledges, leap between platforms suspended over endless chasms, and clamber over gigantic statues. Often, you’ll avoid deadly traps, a hallmark of the genre. Jack and Leila are regularly in danger of being crushed, burned, cut in half, pushed into an abyss, or forever stay trapped in stone chambers. You’ll also solve both old-fashioned and modern logic and environmental puzzles. Some are decidedly ancient Egyptian in nature, and were inspired by their stories and beliefs.

SEND THEM TO ANUBIS

You’ll be immersed in varied combat with real weapons against several unique groups of enemies that require different approaches. For example, the human soldiers prefer shooting from cover, while the mummies require the player to remain mobile. You’ll also be challenged by huge bosses. Make sure you’ve upgraded your weaponry!

The player’s character is Jack Dawes, a maverick U.S. special forces operative who gets burdened with an insidious disease. His wife is a linguist and expert on ancient civilizations who suggests they take a vacation to Egypt. Soon they are both afflicted by a nasty curse sent by the ancient deity Set. In an attempt to remove the calamity, they scour a series of locations in modern Egypt and visit their mythical underworlds, but an equally dramatic battle unfolds inside their minds. There is humor, there is drama, there is bickering and reconciliation… The question is, how scarred will they emerge from this, and what parts of themselves will they lose in the process?

You’ll explore a series of famous pyramids and temples, from the Great Pyramids of Giza, to the temples at Karnak, Edfu, Abu Simbel and the Valley of the Kings. There’s walking through the picturesque city of Abydos ... diving with sharks near the tourist resort of Sharm El Sheik... and taking on guards outside Egyptian Museum in Cairo. You’ll also amass dozens of collectibles from ancient Egypt, explained in detail in the encyclopedia on Jack’s phone. We’ve even hired a real professor from Cairo University to translate important dialogue into proper ancient Egyptian.

Combining indigenous folk elements with Western influences, the music is the work of Grammy-nominated composer Austin Wintory. Jack Dawes is voiced by the well-known and well-loved Troy Baker, while Leila has been blessed with the honeyed voice of the amazing Krizia Bajos. We also used professional actors for motion capture, while the cutscenes were supervised by award-winning local directress Urša Menart.

Wayfarers: Call of Osiris is a new 3rd person action adventure for PC (Steam), PlayStation®4 and Xbox One that combines present-day and ancient Egypt in an unprecedented way. Join Jack and Leila Dawes, an American couple who have bravely answered the call of Osiris on an amazing adventure, full of traps, enemies and puzzles! 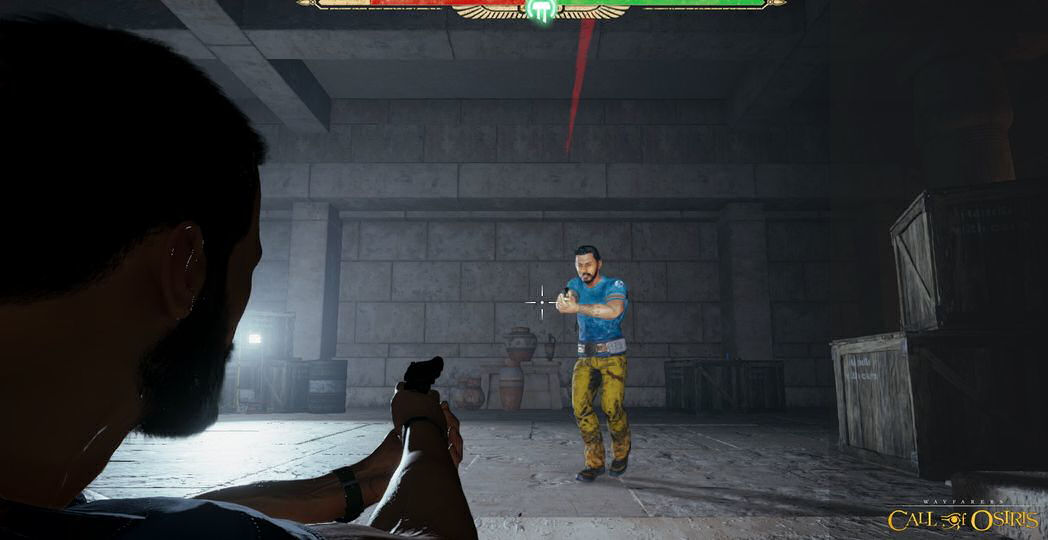 "I shot the sheriff / then I also shot the deputy!" Alright, alright, there are no sheriffs in Egypt, but Jack and Leila face a lot of armed opposition inclined to shoot first and ask questions later. 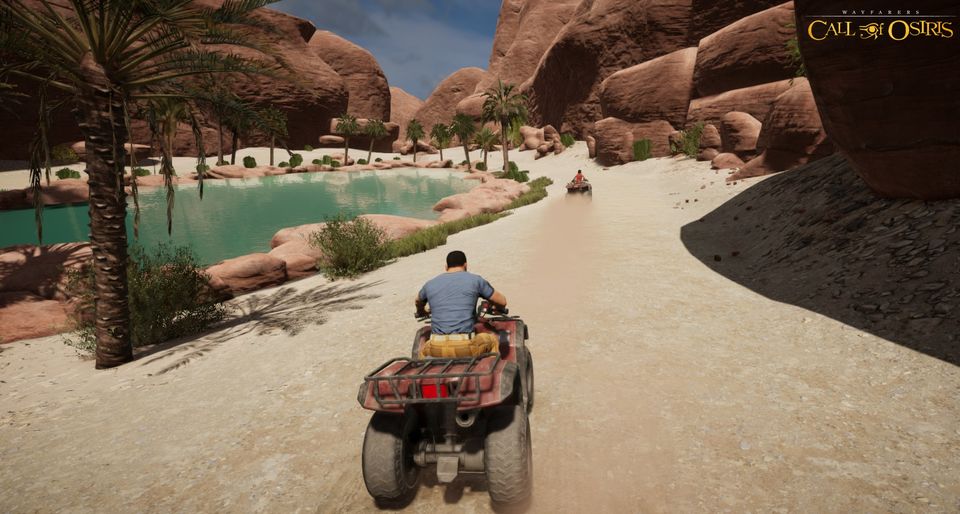 Call of Osiris is multifaceted: it contains shooting, traversing, exploring, puzzle-solving and even driving. Here, our two heroes are enjoying a relaxing quad drive through a gorge near Hurghada in Egypt. Get those revs up, Jack, Leila is leaving you in the dust! 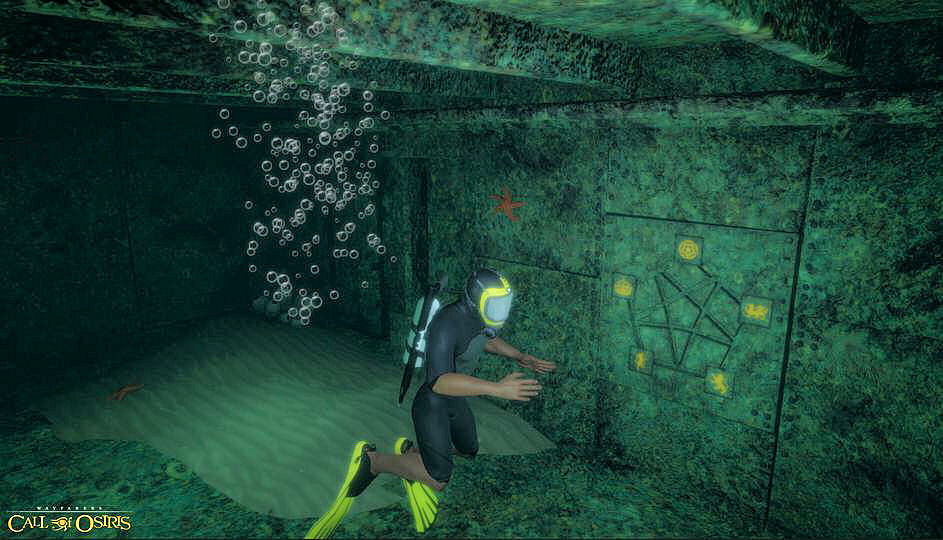 Like surface gameplay, diving in Call of Osiris combines exploration, combat and puzzle solving. Puzzles are integrated into the environment, which is again based on a real Egyptian location. What will Jack and Leila discover among the shale and the sharks? 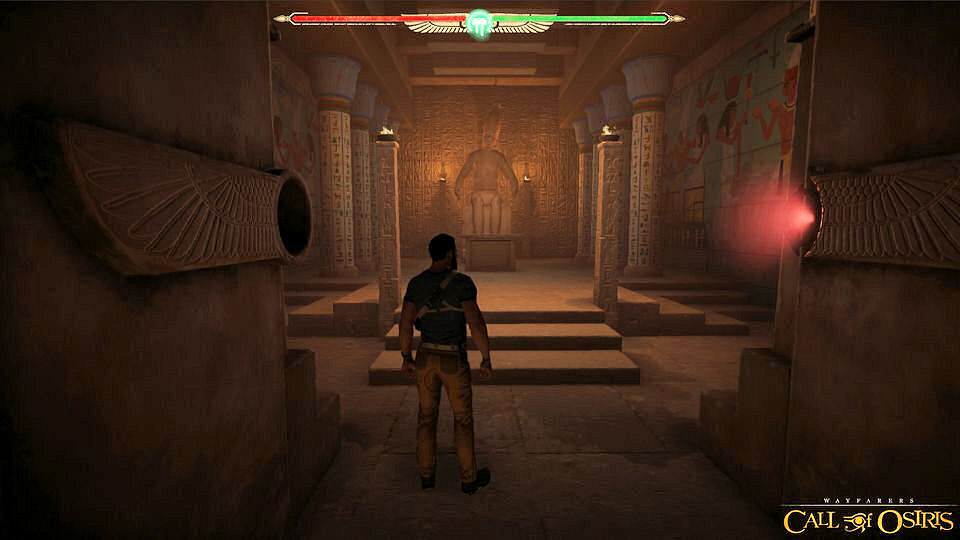 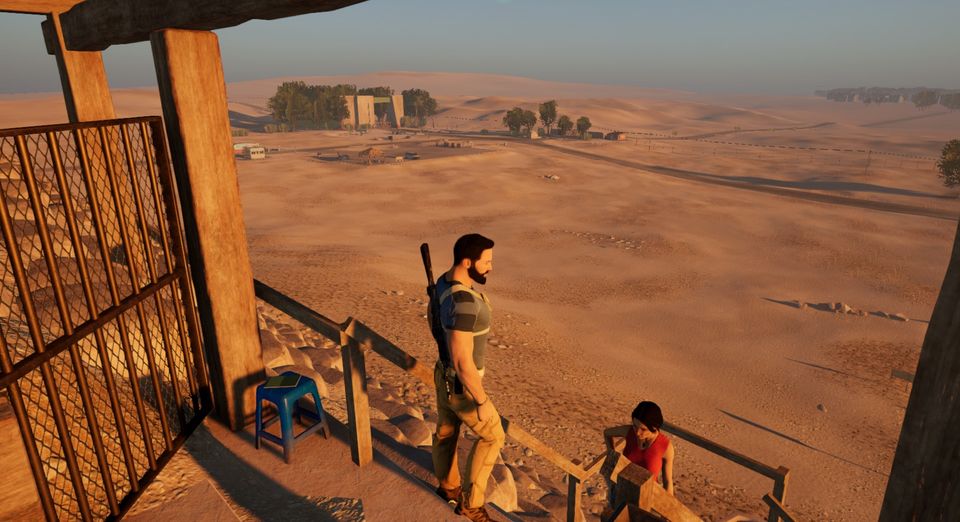 ... and sometimes, it benefits the soul to just stop and soak in the surroundings. This is the view from the entrance to the Red Pyramid, the largest pyramid in the Dahshur necropolis. It's splendid even today, but imagine the impression it must have left 3500 years ago when this magnificent structure was erected
to house the remains of Pharaoh Sneferu.

Wayfarers: Call of Osiris is mostly complete, but ActaLogic will launch a

Kickstarter campaign to finish and polish it. Please consider backing us on

Recording voices for Call of Osiris was a lot of fun!

Designing large levels can be a challenge even with a large team, let alone with a couple of people. So how did we approach creating the often huge levels...

Designing levels in Call of Osiris: a synopsis

The article details how we set about creating both surface and underground levels in Call of Osiris.

Reflections of the old gods: Egyptian mythology in Call of Osiris

Mythology permeates Call of Osiris, a game driven by ancient stories reverberating in the present.

This reminds me a bit of the wonderful "Indiana Jones and the Infernal Machine". What was great about that wonderful (I cannot stress enough how much I still love that game) was that supernatural crap was sparingly and cleverly embedded in an overall realistic setting. The teaser trailer seems like the "Nub's Tomb" level, which was overall disappointing (like the other two ensuing levels) because of the unrestrained amount of crazy stuff shoved in. Yours looks like a beautiful game, but please tone down the supernatural crap and keep it realistic with plenty of clever puzzles (see "The Talos Principle" or the promising "In The Valley of Gods") and good action. Please, do not go down the same road as garbage-can games like "IJ: The Emperor's Tomb" or the Tomb Raider's franchise. That has nothing to do with archaeology or clever video-game storytelling.

Hey :), thanks for the tip. The game is a mixture of the "natural" and the supernatural, but it's all quite grounded in reality, so you won't be flying around or battling enemies with a flaming sword. There are, however, fantastical undergrounds with resurrected enemies, but these don't have outrageous abilities. Hope you like the game when it releases!