Wartek is an Indie multiplayer mech fighting game being developed entirely by me, I left my job for the year to work on this game full time. I plan on having a playable version of the game ready by the end of the year. What I aim to do is to bring the mil-sim type of feel to the world of mech games, think huge maps with gigantic view distances, simulated projectile physics (including drop, drag, wind), a unique take on how fusion powered mechs would work (you must use excess power to cool your core down), and much more. The graphics will be low-poly retro style. Most of the work right now is designing and writing code for the game, so there is often not much to show off, but stay tuned as I do post pictures and videos of things I've accomplished every now and then.

Thanks for voting and helping Wartek: Mech Combat on it's quest to become the 2022 Indie of the Year. You are now in with a chance to score some free games. Help this game secure more votes by embedding the widget (or link) we have included below on your favorite sites.

Last article I wrote was in October of last year but if you've been following the page you'll know I've been quietly updating the videos and images with things as I complete features and have things to show off. A ton of the work I've been doing has been organizing the code of the game, re-writing a lot of stuff, and learning to properly encapsulate things. I've also been experimenting with how I'm going to handle networking, hit detection, mech component system, etc. and I think I have a very good idea of what direction to go in.

Sadly a lot of the work I've done is internal and if I tried to explain it would only be understood by other programmers. Among the things I've accomplished that I can show off quite easily has to do with the bullet simulation. I've re-written all of the original code and it now runs 3x faster, it runs so fast now that I have no worries about it not being able to perform when there's 10 or more mechs on the field slinging slugs at each other at the same time. As it stands right now all I have to do for each type of ammunition is supply these parameters and the simulation takes care of everything else:

a list of completed features for the bullet simulation are:

I've implemented a random number generator for normally distributed or "gaussian" values, this is also pretty hard to explain, any typical RNG will give you uniform values, meaning the chance of getting any value over another is always equal, a normal distribution acts differently and is actually seen in the real world more often than uniform randomness is. You can read more about it on Wikipedia here and here. The following is a picture of how I've used it to govern bullet accuracy cone-of-fire: 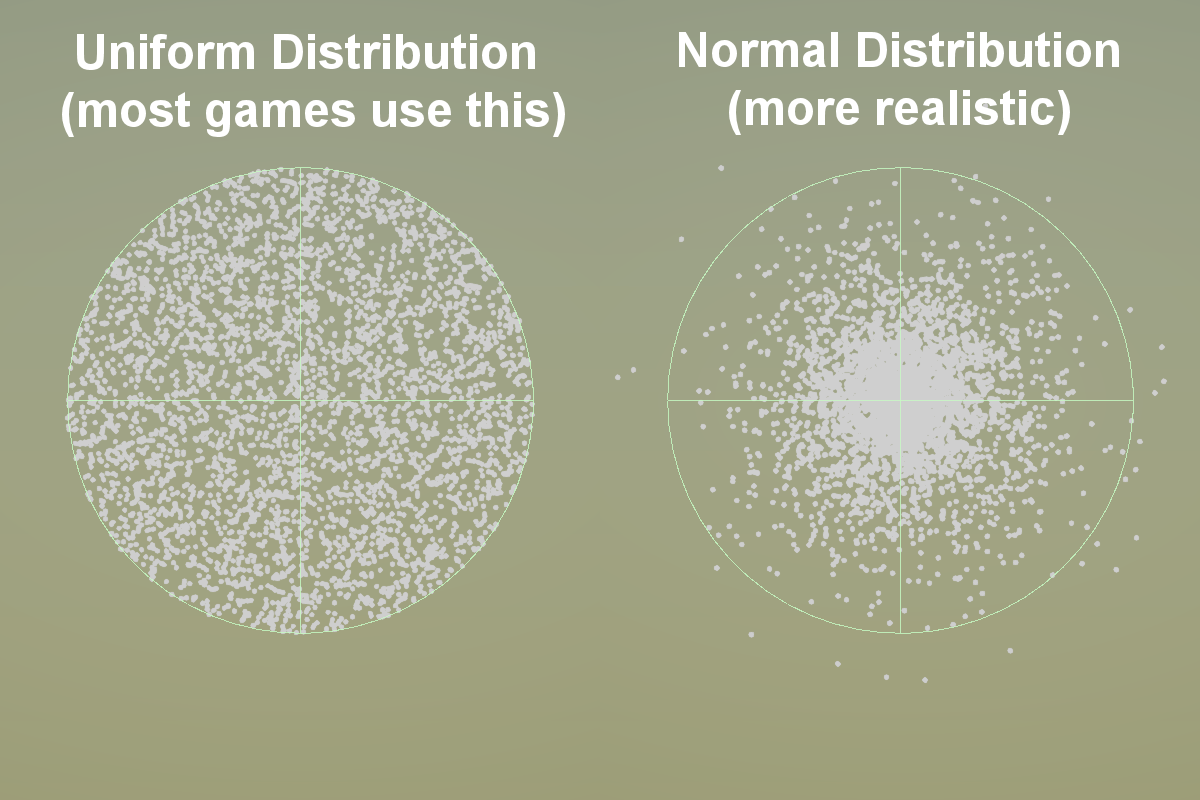 I have a friend that was kind enough to make a few sound effects for me based on what I was looking for, this video gives a good idea of how I want the guns in the game to sound like, *VOLUME WARNING*:

I was hoping I would be able to have a simple Alpha playable version for you guys by the next time I posted an article but It's been way too long and I needed to post one up. Things have been going slower than I've planned but I think I still have enough time to have something by the end of the year. Sorry I couldn't have more to show you guys but hey I'm working on this on my own and learning as I go; bear with me. Feel free to ask any questions about the game if you're curious and thanks for reading!

I am leaving my job in 2017 to develop this game full time.

A summary of where I've come and a road map for the future development of this game.

I'm excited to see where this goes, good luck!