Warped Times is 2D platformer adventure combining the worlds of sci-fi and fantasy. Born in a dystopian world, you will discover the secrets of the magic stone which provides life and death to whole civilizations. Experience the fight between good and evil in two parallel worlds that blend time and space itself.

On your journey you will visit many different environments with unique colorful levels, but you will also face their dark variants from a different timeline, where you will search for lost pieces of the magic stone. Your adventure will be accompanied by various puzzle minigames, boss levels and hidden challenges.

The game is inspired by our old game series Warped Times, which includes four games we released in 2009 - 2015. However, the new Warped Times offers a whole new story, graphic style and concept. We can't estimate the release date yet, but we'll be happy to share any progress in development.

Greetings to all current and future fans :)
I am very happy that after two months I can bring you another important addition to the development diary of our biggest project — Warped Times — and at the same time I am very happy that there is a lot to write about :)

In the first blog, I told you about the history of the original games and how we gradually got to the remake. I ended the whole story by attending the Game Access live event, where we got an amazing feedback (I was especially pleased that the game was well received even at a very early stage). And I would like to gradually follow up on this feedback in today's blog. 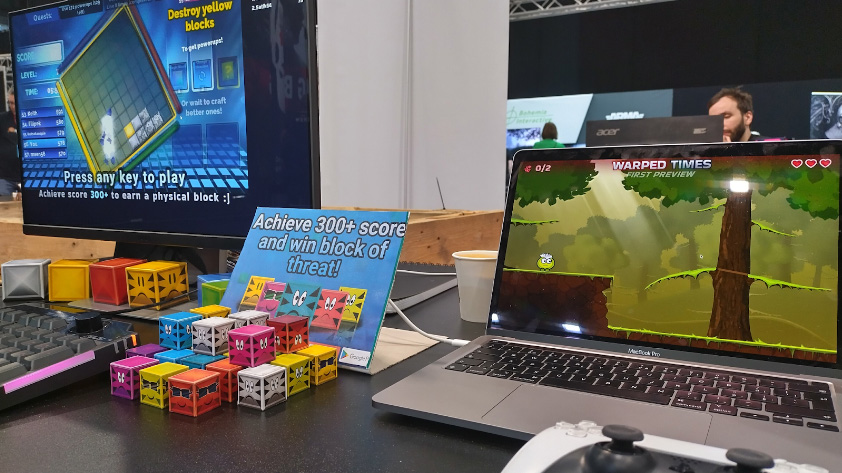 We got the most valuable feedback and ideas for improvement on character movement — no doubt, as it's a very essential part of a platformer game, and I'm sure it's something we'll be struggling with until release. Compared to the previous versions, the current movement is faster and more precise, but we are constantly looking for the best compromise between light fast movement and level design - Warped Times is a specific game and unlike most platformers, it is not so much based on action but rather on exploring the level and manipulating the environment, therefore the character will only use basic movement abilities such as double jump, heavy impact or sneaking.

Nevertheless, there are also more action-packed parts of the game, including boss levels, so finding the best movement mechanics is important and it will definitely be tweaked many times throughout development. In the action passages, as in the original game, I rely more on the use of shooting and predictable work with the environment - here I am greatly inspired by, among other games, the original Crash Bandicoot series on PS1.

Movement development since the first prototype

At the same time, on Game Access I collected a lot of tips for the best platform games, which I gradually tried and thus caught up with my neglected gaming experience from many years ago. While I found a lot of inspiration for all aspects of the game from level design to graphics (most of these games were really good), I was surprised to find that logic puzzle platformers are surprisingly few and far between — which is both good and bad news, since we're working on a not-so-typical platformer, but also there aren't that many games we can learn from to find out what to avoid :) At the same time, I'm glad that I was able to explore the work of other indie developers in search of inspiration.

Prototyping levels as the biggest challenge

I come to the biggest challenge for me so far (and there are many to choose from :) ) and that is the need to adapt the development to the size of the game. As I started work on the first forest environment, making one whole final level is very time-consuming, especially due to the much more extensive and detailed graphics (not to mention two variants for both dimensions), and I am currently preparing them all by myself. I'm used to building each game more or less gradually, finishing one part at a time and immediately seeing the near-final result of my efforts, but it's much more important for Warped Times to have the majority of parts of the game done as soon as possible - both to give an idea of ​​its length and level adjustments, but also for the screenwriter who can then plan the story better.

So I have to accept development in such a way that a lot of things don't look good - either they are made up of placeholder graphics, or there is only hinted gameplay in a location so that I can move to another part of the game. I think this also creates the risk of possible changes or dropping some levels after I actually finish them and find out that they don't quite work, luckily so far all finished levels which were made this way are OK. And as reusable assets increase, it will be easier to estimate the result in this regard :)

However, seeing a lot of broken levels and assets and being forced to leave them in this state is difficult for me as a perfectionist, but necessary for the size of the game and I simply have to trust that everything will fit together properly and if not, there will still be space for changes. Fortunately, from time to time it is necessary to complete a level in order to have something to show for the players :)

Process of completing one level

It would be a shame not to talk more about the thing I'm most proud of so far, even if it doesn't work flawlessly yet - and that's the dimension change effect, or rather the time shift effect. Here I had to fight a lot with my lack of experiences with shaders. I started with a sprite blend shader for this time transition (for a smooth change of the environment I use a blend delay calculated from the edge of the screen) and at the same time I tried using the normal maps for some 2D sprites, and without shader knowledge it was difficult to work with both of these materials. In the end, I managed to write a script of about 500 lines, which can prepare the necessary variants for each object and smoothly transition between them. Small differences during the change can still be seen, but the transition between dimensions is certainly not final and the imperfections will certainly be even less visible.

What pleases me is the fact that so far with each new asset I manage to highlight this change between dimensions nicely, and so far I am most pleased with vegetation and trees. I was very afraid of the treetops, but after experimenting with the transformation of individual leaves using the script, despite my very imperfect programming skills, a good result came out, which can then be easily adjusted for both dimensions (color change, wind strength, leaf density). At the same time, thanks to the just-mentioned normal maps, they look good even with different lighting, which gives a lot of possibilities in the future to play with the dark world, where it will stand out even more. I am curious about the darkest timeline at the end of the story, how it will affect the creation of assets and especially their blending — so far, from earlier tests with placeholder graphics, it could be even more impressive than the timeline at the very beginning of the game. The next question will be optimization, but surprisingly, the game is moving well in this respect so far, at the expense of other things :)

I think I've covered everything important that has happened behind the scenes of Warped Times over the past 2 months. In addition to the continuation of level design and the preparation of new environments, 2 big tasks await us in the future — the first is precisely the story and its involvement in the game, which mostly includes the basic village with characters, for which we would like to decide their exact influence on the game and level design. The second task, which I am particularly looking forward to, will be the preparation for the next meeting with players at this year's Game Developer Session in Prague, where we will hopefully gather feedback for four completed levels in the first forest environment. As always, you can follow all important progress on our Twitter and Discord, where I always have something new to show :) I'll be looking forward to the next blog and thank you all for your support and wishlists!

The first development blog about the beginning of the story platformer Warped Times.