It’s late at night. You’ve been at your mother’s office for hours, and all you have to entertain yourself is your trusty Gameboy. It’s gotten you through thus far, but now, there’s a problem… You have to go to the bathroom. What’s normally a task you hardly give thought to at home takes on very sinister connotations at the office. Here, that journey is a dangerous one. Because out there in the inky darkness of the workroom floor lurk great apex predators. Hunting… Waiting for you. The Velociraptors. You’re far too old to get away with wetting your pants. There’s no choice; you have to go out there. But this isn’t your first dino rodeo. While the path to the bathroom is dangerous, it isn’t impossible. If you keep low and move stealthily, you can make it past them. There are places someone small like you can hide, and office equipment you can use as distractions. You can do this. You have to do this. You have… To pee.

I figured that the first and best order of business before I started doing proper development updates was to create a little introductory log first! To that end, this post is primarily going to discuss what Veloffice Raptor precisely is and how long it’s been in development up until this point (spoiler: a long time). To borrow a term from Scott Rogers, Veloffice Raptor is a bit of a purple cow title, and might have some of you wondering exactly what this game is all about. Hopefully this will be a serviceable primer to my dino-stalking world!

When I was a kid, my mom worked as a real estate agent. I'd sometimes go with her to her office at night so she could finish up some pressing work. The building always smelled heavily of toner. Generally, I kept close to the desk in her well lit room, while the rest of the building stood dark and empty.

But every so often, I'd have to go to the bathroom. Quietly and nervously I'd make my way through the small maze of cubicles, with walls coming up just over the top of my head. The kitchen was next to the bathroom, and the lights were always left on. They served as my only guide to the woman's room door. When I finally made it out of the cubicle maze, I'd always run that last straightaway, because I was worried that if I didn't, I'd be caught.

Not by a monster.

I was POSITIVE that Velociraptors stalked the cubicles by night.

I don’t remember precisely why I brought up that memory, though it might have had something to do with the announcement of Jurassic World. It would be suiting, as the reason why I was afraid of Velociraptors in the first place was because of Jurassic Park, which came out the summer after I finished third grade. Like most kids, I was obsessed with dinosaurs at that age, and somehow managed to convince my older friend’s father to let me see it with them. To say the movie made an impact on my young mind is a bit of an understatement.

While at the time having to hide from dinosaurs that were hell-bent on eating me was more on the scary side than properly “fun”, today I look back on those imagination based games with a great deal of fondness. There’s something magical about a child’s ability to imagine something so vividly that it becomes utterly and completely real to them. If you look back, I’m sure you’ll remember these experiences as well; where what you imagined wasn’t something you just pretended to see, but rather, you actually saw it. I’ve long lost this ability, but I feel like I come as close as I can to reclaiming it when I play video games. This, more than anything else, is probably why when someone replied to that Facebook post suggesting that it’d make a good game, I thought that it just might.

So, I spent a couple of weeks developing the concept for a game that would recreate my daring quest to get to the bathroom at my mother’s office while avoiding certain death by Velociraptor. The same friend who suggested I make the game in the first place offered the concatenation of Veloffice, and the name of the game was born. That was July of 2013, and I’ve been developing the game ever since!

…Which, if you do the math, is a fairly long time. I’m developing Veloffice Raptor on my own (with certain elements being commissioned here and there, such as the creation of the amazing raptor foe by the crazy talented Eric Pochat—seriously, go check out his work!) in my free time, which unfortunately I don’t have very much of. As great as it would be to work on the game as my full time job, I actually spend my days teaching other people how to make their own games at an art school (though as far as day jobs go, this one is pretty awesome too). So, while my life is pretty much all about video games, it’s just not all about mine all the time.

All that being said, I’ve hit the point in my development where I know it’s ‘do or die’ time. I either have to push this game to completion or let it drop and move on. I’ve decided that I want to make 2016 the year of the raptor. 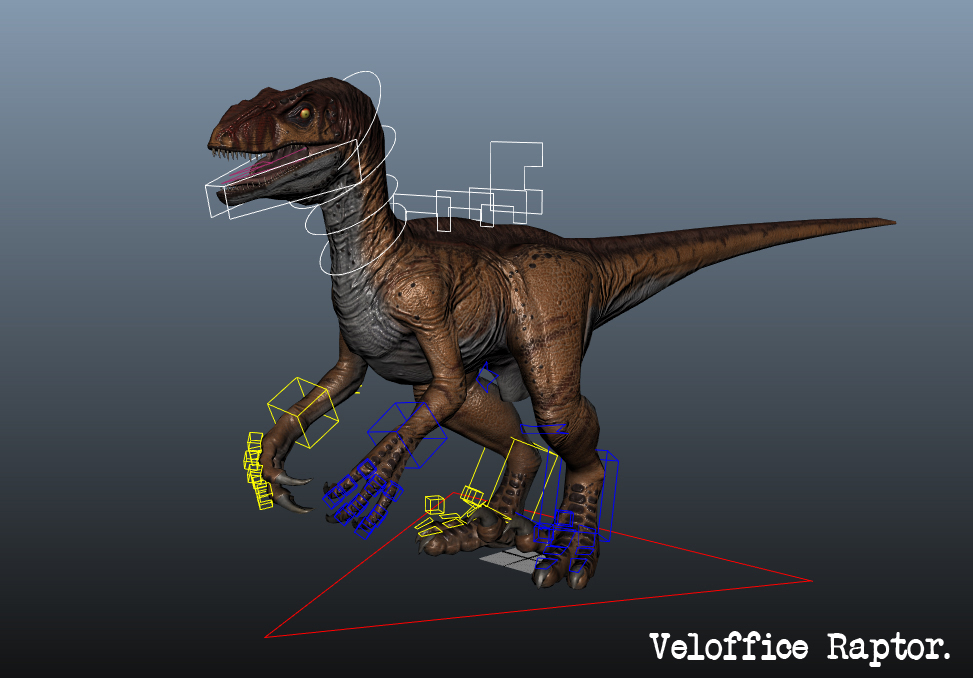 (Seriously though, Eric's work is amazing. Just imagine when these guys will be trying to bite your face off!)

My goal is to release Veloffice Raptor on Steam for PC and Mac. There will also be an Oculus Rift compatible version of the game, but for now I’m putting development of that off until at least the beta of the regular version is available.

Several months ago, I did a very limited test release of the core functionality of my game. At the time, I only had a few sample mazes, the ability to hide, a couple of distraction tools, and of course, the raptors. Well. The raptor AI. The raptor mesh was still being rigged at the time, so the stand-ins were big red capsules.

It turns out red capsules can be pretty terrifying on their own! The reactions to the test were really heartening, and I can’t quite explain the satisfaction one gets from watching someone scream in fear while playing your game. Over the years I lost some perspective on my work, but after the test I’m convinced I have something that works as a game.

Since then, I’ve been replacing placeholder meshes and scripts with more permanent counterparts. I have only a couple more distraction tools to script and the controller to revise before I’m ready to do my next test release.

I think that’s enough for now! Moving forward I’ll probably blog about specific aspects of the game as I complete them. As I mentioned before, my list to the next test is fairly short, so you’ll probably see a fair bit about those subjects until then. I hope some of you will be interested enough to come along with me for the ride as I work to close out this development cycle once and for all!