We did a tremendous amount of work in the past months.

And now you can download and try out our new DEMO for Urtuk.

We overhauled the graphics of characters and battlefield terrain, added new combat mechanics and streamlined the gameplay. 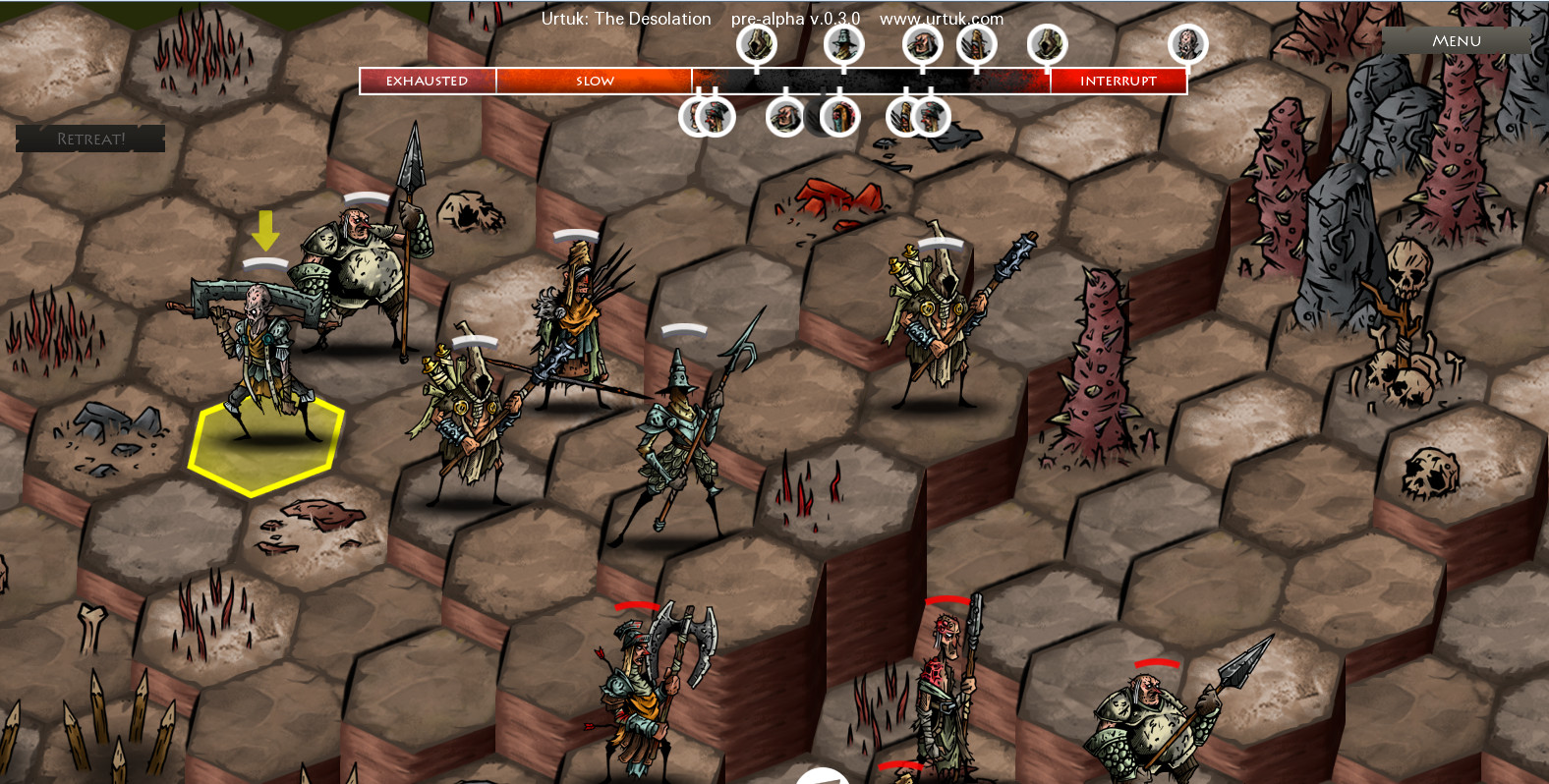 The game consists of two parts:

As of the battlefield map and rules, we have quite good understanding and thoughts how we build it.

For world map, we still are experimenting with various ideas and iterating. As you could see from previous posts, we first had a hand-made world with static map graphics, fixed quests, paths and pacing.

Then we tried the proceduraly generated open world with AI entities traveling and fighting with their own AI (behavioral tree), settlements, generated generic quests, factions and world stories, and in real time.

But after 3 months of implementing and experimenting, although it was technically working perfectly, it was a huge scope to take on :(. So we decided to simplify and streamline the campaign and invested our time into a more "FTL like" map, with nodes and routes. It is still generated, but the the world rules are much simpler.

Furthermore, with any party member, you can "butcher" him to extract "live stone", a specific resource which can be used to upgrade member normal abilities, focus abilities and class perks.

Or you can butcher him and extract "mutator", another special item, which can be equipped by any member. Mutator will grant some powerful trait, like +HP or extra counterstrike on hit.

With all of this, we want to make sure, that the party members progression will be vital to gameplay and most engaging for player.

But today, I want to discuss the combat.

Characters are able to travel only hexes with elevation difference of one, so you might come with some interesting tactics to leverage the various heights. Also, if a character is pushed/thrown to much lower hex, it suffers damage or even can be killed. 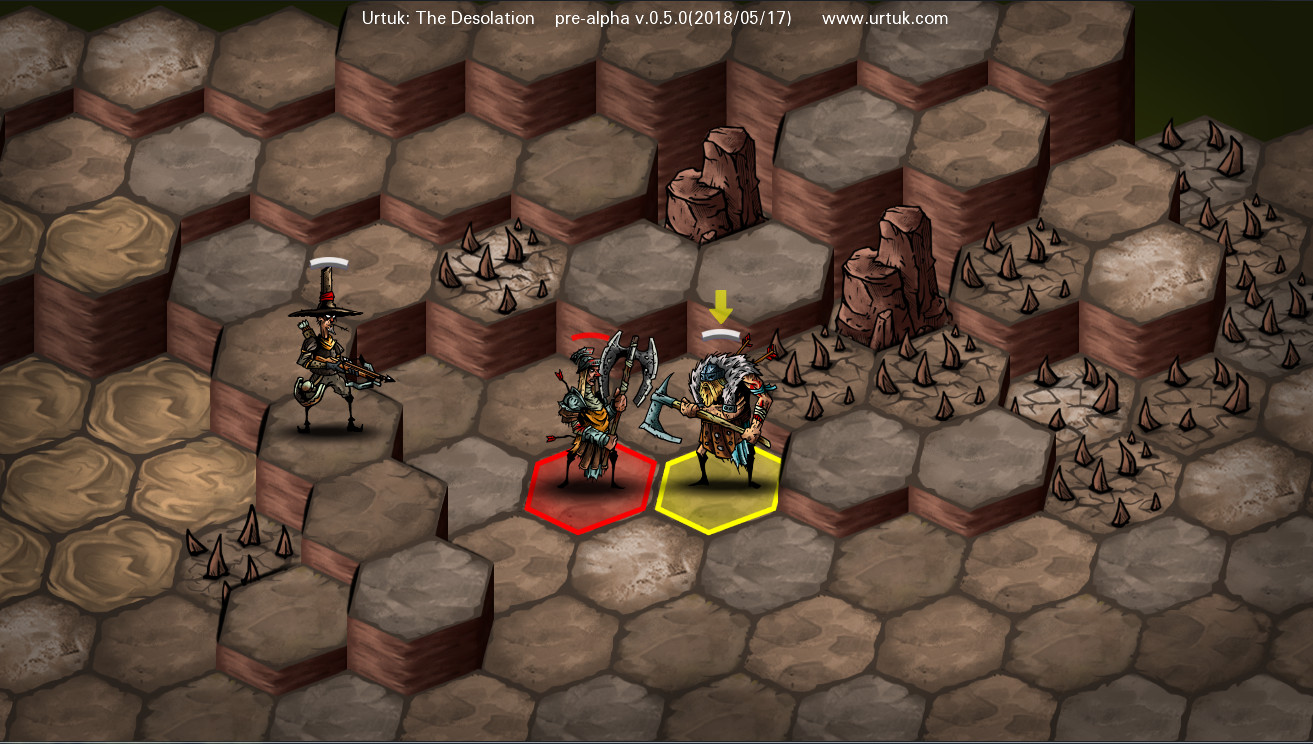 Before this feature, the turn order was - first player, then enemy. Now we introduce the timeline where characters act depending on their "speed". In some games this is called the "Initiative progress". Thus faster characters will act more often than slower and will not decide only the turn order.

In this game, the speed can be adjusted by various abilities or effects and player can control the turn queue. Also we added the "Wait" ability for every character. This means "skip current turn" but with a speed bonus.

We introduced a new mechanic - Counterstrike. This is a triggered attack which occurs when defender blocks incoming strike via armour block, Aegis or Shield Ally. The Counterstrike is always critical:

Some effects can trigger additional behavior or other effects. Like in this case, the Spearman pushes enemy away.
Another effects triggers, if a character is pushed/bashed into an enemy, that enemy will automatically retaliate, thus having a free attack.

Enemy can be pushed off a cliff:

If a character is 'Engaged' and moves away from 'Engaging enemy', that enemy will automatically trigger a free attack (attack of opportunity).
Attacking a character with the 'Slowed' or 'Exhausted' status effect will cause the hit to be a critical.

Attacking a character which is rear flanked (Backstab) causes always a critical hit:

There are many effects associated with critical hit, for example Berserker causes Bleeding on critical hit, Spearman pushes target one hex away.

Another feature is Ranged support. This simply means, that whenever you attack with a melee attacker an enemy, all your ranged characters (within range and accuracy) will fire at the same target. Note that the game has Accuracy and Line of Sight implemented for various weapons such as crossbow, javelin and so on. So even when your archer is nearby, he might have his line of sight obscured or his accuracy is too low and thus won't fire. You will need to place him on high ground. On the other hand, the Javelinman has high arc fire trajectory and will be able to throw the javelin over objects and characters with no problem, but has a less fire range than others.

Besides the normal class abilities, there is also a special set of abilities called 'Focus abilities'. These become available only if a character has its 'Focus bar' filled to 100%. Focus abilities are very powerful and can dramatically change the outcome of a battle. Each class has its specific Focus ability.
The 'Focus bar' fills by doing or taking damage. When at 100%, the ability is added to the global Focus abilities pool. One or more can be used globally anytime if one of your characters is on turn.
A maximum of 5 focus abilities can be hold in the pool. If already at full capacity, the oldest one is replaced by new one.

That's it for now, stay tuned for next dev blog!

This looks very cool, I will download it and try it. Thanks.