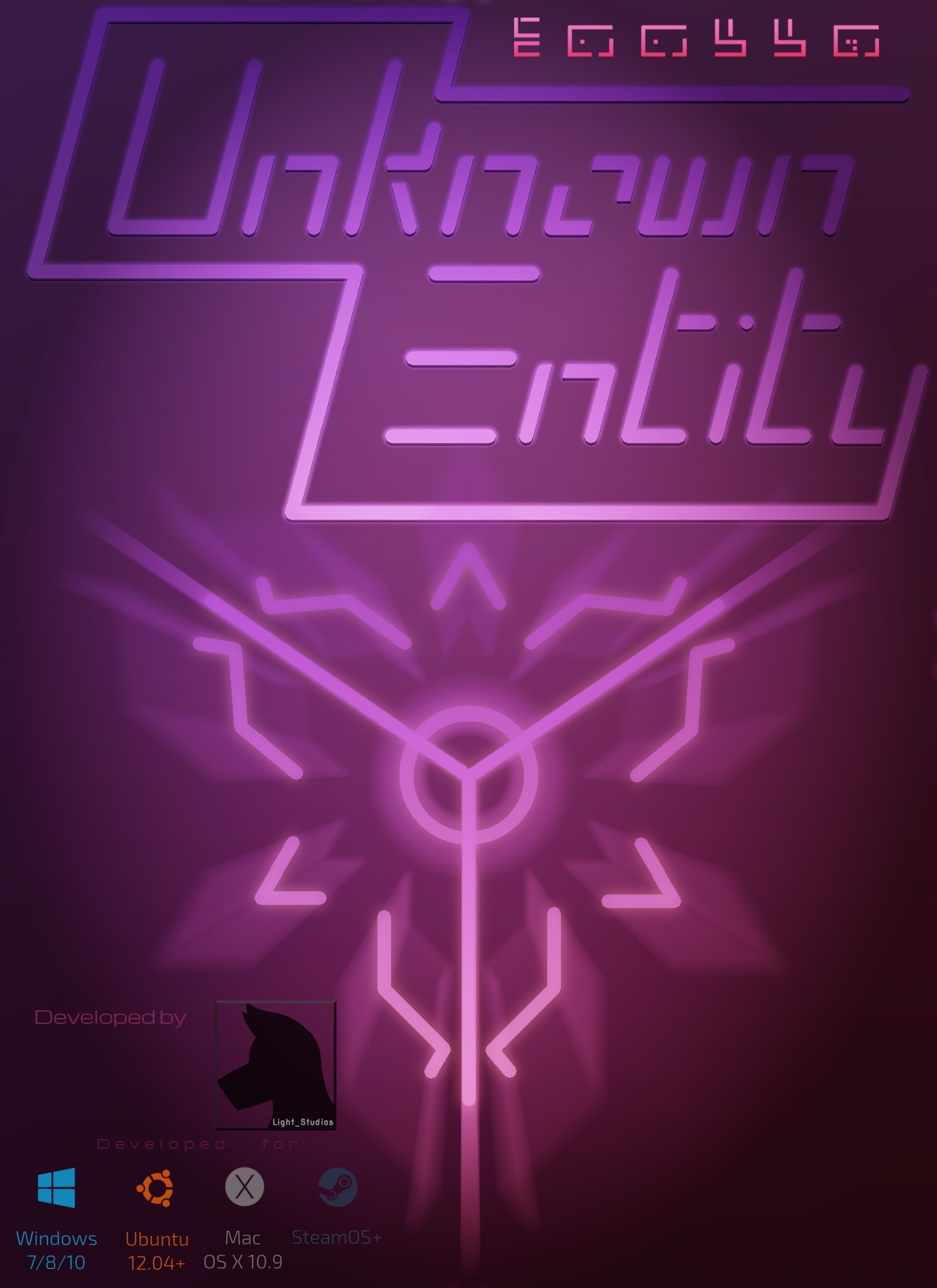 Current Status: [HIATUS]
NOTE: All previous uploads before v3.01 (marked with Alpha/Beta #.#.#) are out of date and represent a past project setup/files.

Unknown Entity is a WIP in-revised-beta sci-fi first person shooter designed for Windows, Linux, and Mac* that will be released for free. Track the game for continued updates!

Unknown Entity takes place on the Reservatarians' lunar bases on Om-4 B. They had peacefully used it for scientific research of the resources located on the moon, generating an atmosphere, and other topics of focus. Until now...

The bases have been taken over by strange, bio-mechanical race of beings that they are dubbing as 'entities'. The planet has lost contact with the moon and has no idea what is happening.

You are the main protagonist – an UPAESI** chief maintenance officer who usually works around to help develop advancements for astro-technology. You have no idea what is going on either. You lose contact with your team and must investigate alone the cause of the bases' sudden silence, and eliminate the threat you find before nearly 70 years of lunar progress is lost...

Unknown Entity on the Web:

The game is currently in Revision Update Beta (levels are being designed and less important features are being added). Any images, downloads, content, etc. are unofficial. The latest version is v3.06.

*MacOS (X 10.9+) is available, but is currently untested and does not have as much support.

This is a notice regarding the project's current status. -Lightling


"Unknown Entity is now on a hiatus from now until December. I, Lightling, will not have access to my desktop (LightWolf01) during this time period, the main hardware I develop Unknown Entity on. I will make attempts to further develop on my laptop, but I doubt it will run well, despite v3.07 being heavily focused on optimization, especially with the complete overhaul of the majority of the buildings and other objects in the game. v3.07 was mostly finished, though persistent burnout kept coming back after I'd work on Unknown Entity. v3.07 also had the Carrier scene in development, an almost separate-seeming project on its own that was visually mostly finished until I had problems baking GI in the scene. The way the scene is currently may be revised to where there are separate scenes using Scene Management to stream them together so that they can bake lighting. As for the regular scenes, the player prefab and some more cutscenes still needed to be revised for the object overhaul. These are what will be worked on when I am able to work on the project again." (from main L_S site). Please note the time period during December that I can work on the project is not very long, and the game will likely go back on hiatus. The game has been on hiatus for a little while now technically, it just hasn't been announced here.
Available so far in the upcoming v3.07

| Light_Studios Site | L_S Twitter | Itch.io soon to come when game is done, will be released under this | Game roadmap

This is an update regarding the progress and production of Unknown Entity: v3.06 has been released.

This is an update regarding the progress and production of Unknown Entity: v3.05 has been released.

This is an update regarding the progress and production of Unknown Entity: v3.04 has been released.

This is an update regarding the progress and production of Unknown Entity: v3.03 has been released.

It's great to have corrected the errors, but does not work on all computers. I wanted to install on a computer that has more than the game asks me. But the operating system I use is 32 bits which cuts the opportunity to make the game more popular.

Some games designed with the same software that you are dealing with their function with 32-bit operating systems and 64-bit.

Congratulations on your game.

I realized it still says "it's exported into x86, but will be built to support both" in the help.odt, even though it should just say "it's exported into x86, which runs on both 32-bit and 64-bit." I'll correct that soon for the next build. However, are you saying it's not working on a (your) 32-bit system? I would like to find out what is wrong so I can fix whatever went wrong, since it SHOULD run fine on both if exported into x86 (especially since x86 IS 32-bit). I just don't have the opportunity to test it on both right now (I have 64-bit and I don't know anyone who has 32-bit). Any information you can provide would be most helpful ^.^ (especially since the game IS bound to have problems at this early of a stage without much help to test) If there is a problem with it running on 32-bit or 64-bit, I'll just export it into both next time.

Also, sorry for the delayed response, I must have forgotten to check IndieDB in the past couple of days.

FWIW it runs on my win xp sp3 system. with 3ghz core duo 512mb vram it is a bit laggy in places but it does run.

Thanks! This is very helpful!
If you would like, you can use this form ( Lightstudiosgaming.wordpress.com ) to give any more information

Looks pretty cool according to the screenshots!

Thanks! ^.^
Still waiting on the next update to be authorized, but it's available at dropbox if you'd like to see: ( Dropbox.com 1.1.0.zip?dl=0 ). Nothing special yet, obviously, but it's totally a lot better than the direction it was going before the whole original project was lost a while ago XD
EDIT: I guess IndieDB is breaking the % 20 part, so you'd have to copy and paste the first part of that link then press space and then copy/paste the second part... Weird...

This looks like fun. I can't wait to get my hands on it, do you mind me doing some videos for youtube once it's done?

Thanks :D
No, I don not mind, I welcome the idea of doing videos for YouTube ^.^!

I wil send you a report next week with tips, thoughts and bugs. My second pc has Linux, but i need to know the minimum requirements to look if my Linux pc can take it.

Is the newest version available on IndieDB so i can report relevant things?

War Of The Worlds The Game (WotW) First Person Shooter