It has been a long time since the last ‘official’ devlog. Don’t worry, development is still going strong, but most of the action, beside releases, occurred in the forums. Also, to acknowledge Christmas and new year’s eve, Unending Galaxy is 33% off on itch.io and IndieGameStand until December, 26th.

Next version will be 1.1.5 and should be available before (or around) the beginning of next year. It will have more content than 1.1 and include new maps and several community requested improvements. Let’s get to what has been done so far.

The deluxe edition will include 2 new hand crafted maps. While both are still being actively tested, the following screenshots can still give you an idea: 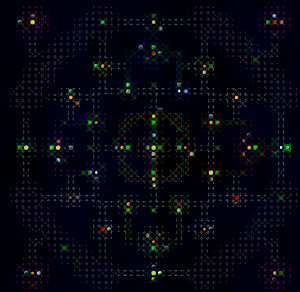 It’s a large symmetrical map. The Draths are besieged by the other factions who are besieged by the AI Core. All in all, it’s a fairly classical map, but it will synergize well with some planned features for the “new game” menu, namely the ability to play as a specific faction.

This is a medium map (and probably a temporary name). The twist is that most asteroids are located in the pirate controlled nebulae. As such, securing your ore supply may be a tad difficult. Also, the central solar system is home to the Swarm, another potential problem if left unchecked for too long.

While trying to fix the falling letter glitch some of you are experiencing, I added a bunch of options to the gaphic settings. The one having the most impact is likely the ability to change the opacity of nebulae as demonstrated in the following screenshots. 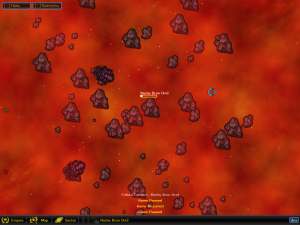 I also made movements smoother at higher FPS and added the ability to cap the refresh rate to 90 for those having 120Hz monitors but not the CPU or GPU to display 120 fps constantly. I resized the AI Core carrier and battleship and added a few pilot portraits.

I made multiple improvements for people playing with any level of fog of war. Sectors which aren’t explored yet but are neighboring one you’ve visited already are selectable. As a result, it’s much easier to order your ships to go explore sectors you haven’t visited yet but. Also, the galactic map and the Sector Info panel will no longer display objects you haven’t discovered yet.

While at it, I added a new filter to the Sector Info panel displaying all your assets in the currently selected sector. And to make this panel slightly more useful when coupled with the galactic map, entering a sector will require to left click a sector twice, once to select and another one to enter (right click works as usual). I made this change because moving the mouse toward the panel had a tendency to change the selection.

Also equipment in the Shipyard, Ship Setup and Buy Ship menus, in addition to being double click-able, can now be drag and dropped. Some menus have been resized, others slightly improved, the usual.

I added a new “Kill the Swarm Hive” mission which spawn on trade/military stations with a hive nearby. I rebalanced some colonies, namely the ability of the Siraks and SPQR to build their super capital colony even on the most desolate rock or corrosive planets.

And as usual, I fixed a bunch of bugs, including most of those which have been reported by the community. The most annoying ones being a possible crash in the trade menu alongside some problems with the recently added benefit/loss indicator ; spaceflies being registered as foes by the swarm ; or the ability for swarm queens to bypass their hangar limits.

A new major faction will be added to the game. As a matter of fact, you may have encountered some of their ships and structures in-game already. It will use unique ships, wares and docks, and even weapons if I get the time to implement everything I want to. More on them later on

I also have a small list of user interface improvements, mission types and small features I want to add before release, including some user requests. Actual content will vary depending on how long it will take me to finish everything else.