Our weekly development log with the new scavenging AI, passengers to rescue or sell, and multiple other improvements.

This week I added some gameplay features with new lucrative jobs for both the player and the NPC ships thanks to the introduction of passengers. I also greatly improved the sector map usefulness, added a screen with the statistics of the the various factions over time, added new AI for ships, and many other improvements that will be detailed in this article. 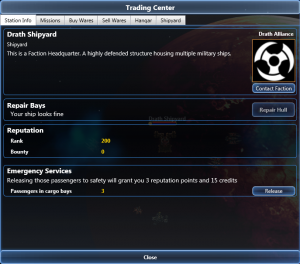 If you've played a lot with the alpha already, you may have noticed that the Slave Pits dock needs passengers as a resource that couldn't be found anywhere in game. Passengers, in the current in-house build, have a chance to drop when a manned ship gets destroyed and can be collected like any other loot drop. Passengers can be "used" in two ways so far. You can either locate a slave pit and sold them there for full price, or you can drop them at any trade station for much less money but with a reputation bonus. It's, of course very likely that the concept will be expended upon during the beta by the addition of VIP escort missions, taxi services and slaver ships.


I added scavengers as a new NPC type (used by pirates and Siraks right now, but it's susceptible to changes). They typically aren't aggressive and as the name implies they will look for cargo to collect and sell it to a friendly dock, making them the only ship AI able to provide passengers to the slave pits at the moment. They will try to escape if overwhelmed by hostiles and they can seek repairs whenever needed. I also improved and fixed some parts of the other previously introduced AI, as an example bounty hunters can now flee and seek repairs properly.

Another new "ship" AI I am currently implementing is the Space-Fly (temporary name). It's a very basic and perfectly harmless creature that fly randomly from an asteroid to another in a given sector. It the first step toward the implementation of hunting/farming docks. The general idea is that this factory will use "hunting" ships (instead of trading vessels) to hunt and collect the loot dropped from various space critters. The collected loot will be in turn converted by the factory into trading goods. More about that next week :) 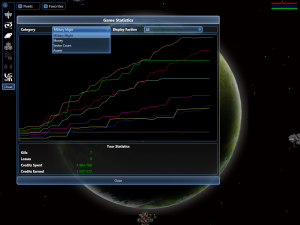 I added a screen to display various statistics about your (and others') empire. It is likely to be used in the "game over" and "you won" screens. Right now you can see a graph comparing the military strength, the money and the size of each empire. It also display your overall kills, deaths, money spent and earned. More stats will be added over time. 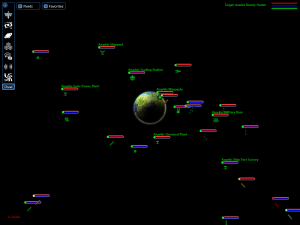 As requested, the icons on the sector map rotate according to their corresponding ship's direction. Stations also have their name and health displayed. Holding the shift key will display the health of all the objects on map, ship names aren't visible to avoid clutter, though.

In general the overlay indicating the faction, health, name and status of an object is more readable and less intrusive. I also made it consistent between the standard view and the sector map. 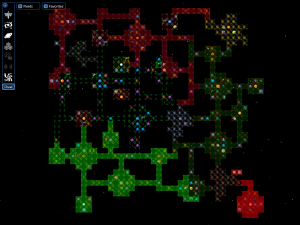 The galactic map also got an optional overlay to display the relation between your faction and the others. Right now It's only useful when you play as an empire, but different overlays with different info will be gradually added to the game.


I also spent some time reducing the CPU usage using appropriate tools to locate the bottlenecks. I improved the parts I can safely optimize (parts that are unlikely to change during the rest of the development), but those are rarely critical to the performances. That said, once the dust settles, I am confident that overall performances can be increased significantly (from 33 to 50 percent).

Not a lot of bug fixed this week. I fixed one with the "kill" mission type that would give you a reward even for missions you didn't accept, and there's another one where a ship could survive with a negative hull percentage.


As I have found a better sound library than the current one, I am likely to implement sound effects and rewrite how the music is played as well. I am also going to finish the "space critter vs hunter" system I explained in this article. There's still a few buttons to be completed in the diplomatic menu and dialog options I would like to add before release.

Still, if I can manage to keep this pace, the beta release should be coming soon :)

WHAT THE 'EFF!?!!? is today "Extreme Talent Monday"?!?!?! Great looking game and super impressive showing here! is there an ETA on the final? I see it in in Alpha and playable.

Hi and thank you very much :)

The beta version should be available during November. The final version is planned for Q1 2015 (details are available on our official website).