Top-down undead smashing. Play with one of four different characters, single-player or in co-op with up to four players. Use magic, place traps, launch devastating starfire bombs, power up your hero, and be prepared for challenging boss fights. Available for Windows PC and Xbox Live Indie Games. Windows version supports mouse/keyboard- and gamepad control.

Undead Legions – Resurrection combines fast and frantic top-down shooting with elements from the Rpg and the Tower-Defense genre. Players can play with four different characters that each have their own strengths and special abilities, single-player or local co-op. The progression system allows for many hours of gameplay, global leaderboards are there, and many updates are planned to keep the game alive for a long time after release.

It is the official successor of the classic Undead Legions that we are are presenting here on IndieDB, which has been greenlit at the beginning of this year. This was great news, of course, but we didn't actually really like it anymore. We then decided to deliver a completely worked-over game instead. It comes with many improvements which you might want to check out on our homepage. Also, we started a Kickstarter campaign to help financing the final development phase.

Bundle Buyers will still receive their promised Steam Key once the game is released, since many of them helped us getting Undead Legions through Greenlight. In fact, Undead Legions - Resurrection will come with a secondary game mode that is almost an exact copy of the complete classic version. 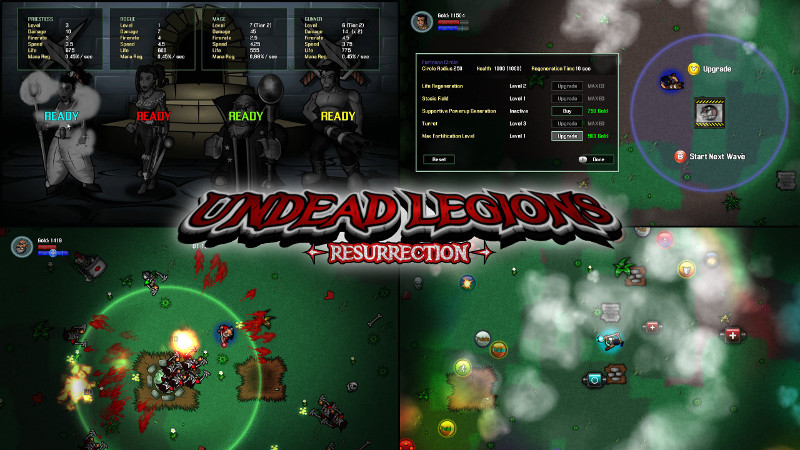 Fight yourself through wave after wave of terrible undead and stand the ultimate shooting test against the powerful Undead Overlord, or fight forever...

Top-down twin-stick undead smashing. Play with one of four different characters, single-player or in co-op.

Key17 Games is proud to announce that Undead Legions, a fast paced and furious twin-stick zombie defense shooter, is available on XBLIG.


I also was unable to make the game fulscreen even though the option existed.

and yea on more thing how do i go fullscreen?

so hi guys my friend and i bought this game we rly want to play co op so how do we do it??

in survival mode i can not pass wave 1 with gunner. the last enemy is invisible and unhitable. if you stand still you notice that you will bleed and loose life. if you shoot you see your bullets stop somewhere in the air where the invisible enemy seems to be. this makes the game unplayable. with priestess i had not this problem. also no problems encountered in classic mode.

Does this always happen when playing the Gunner in Survival Mode?

Why the setup is 1.1b? the game was updated?

The difference between version 1.1 and 1.1b are some minor changes to the PC version.

Have you installed the .NET Framework 4 and the XNA Redistributable 4.0?