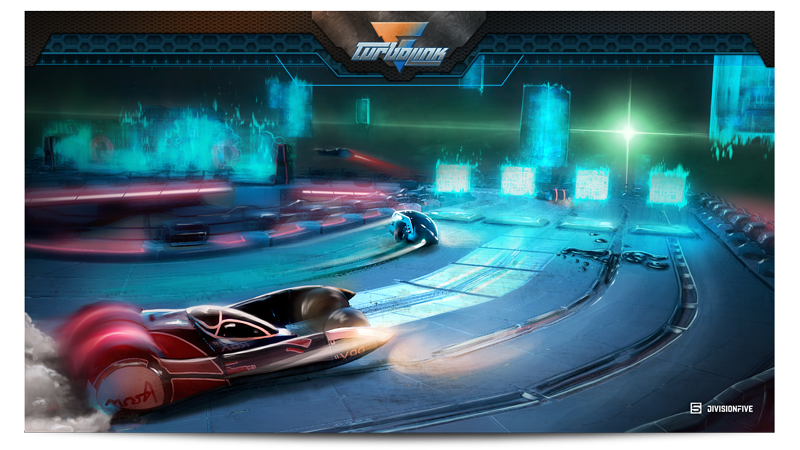 TurboLink delivers a fast-paced racing experience for up to 4 players locally. Drive futuristic vehicles and participate in dangerous tournaments that take place all around the abandoned Earth. Use your hacking ability and various items to give yourself an edge over your opponents!

At the end of the 21st century, Earth was infected by an unknown virus that killed over 3 billion people.All effort was poured into research and numerous attempts were made to identify the virus. Humanity was defenseless and their extinction seemed inevitable. With only a few hundred thousand people left on the planet there was little hope to save mankind. However, some of them managed to escape from Earth using the Space Arcs built primarily for travelling to other planets.The leakage of the Permafrost’s methane and carbon gases has changed the atmosphere completely. Earth is getting warmer each day and there’s not enough oxygen to sustain human life on the planet.TurboLeague’s tournaments serve as a way to go back to Earth and see it again from up-close. The cars are highly advanced pieces of technology controlled remotely from the sky cities that hover over Earth. The tournaments are a source of entertainment for the people as well as a way to soothe the pressure and discomfort created by living imprisoned in outer space.

TurboLink’s main gameplay is divided into tournaments. Each tournament consists of 5 races over different tracks. The players will be awarded points in the following manner:1st place – 3 points2nd place – 2 points3rd – 5th places – 1 pointthis scoring system has proven to be the best way to keep the game competitive and ensure that even the last place can catch up with the tournament leaders. There will be 7 tournaments hosted by the TurboLeague.SkyCity - living on the Planet’s surface became impossible, so the TurboLeague stations were built high up in the sky. The platforms on which the city is situated are supported in the air by powerful engines.

Mainframe - a virtual simulator created by the TurboLeague to train pilots before they are ready to race in the real world.

Archipelago - sun, water and sand! Looks like a paradise, but the shallow waters of the archipelago hide many dangers such as geysers, chasms and vicious creatures. Prepare to face to the power of the oceans!

Ancient Ruins - remains of an old civilization that were adjusted by the TurboLeague to serve as a new tournament.

Amazon Jungle - dive deep into the center of Amazonia! Avoid fallen trees, broken branches and stones to survive the whole race and finish on the podium! The organization have placed some surprises around the forest so stay sharp!
Burning Grounds - there are places places in the world where the temperature reached such high levels that even cars can get burnt to ashes.

Polar Wasteland - race through the snowy mountains and frozen plains! Hack remaining devices and machines left at the excavation sites and find hidden paths below the ice!

TurboLink can be played in a single player mode but we've put a special effort into making it a super fun multiplayer game. Trying to balance every feature of the game and cars, we hope to create a captivating and competitive multiplayer experience with a deep level of interactivity between players.

There are 7 unique items that can be obtained during the course of each race:
Click here to check out all the features!

TurboLeague hosts the events but is not directly involved in car production market. There are other companies and sponsors that take care of that and try to prepare the best vehicles for their pilots. There will be 20 cars available in the final game but some of them need to be unlocked.

RBX - a car that changes its top speed depending on the current position in the race. The lower you are in the ranking the faster you can drive.
Tritium - due to its extremely advanced steering and tracking systems this car offers great stability on any curve.

Lightray - its phaser gun is more powerful than others. Generates one additional phaser missile each lap.

Striker - striker’s drain impulse instantly empties all the energy of the target and deals more damage than the basic impulse. Generates one additional drain impulse each lap.

Salamander - mines left by the salamander deal more damage and launch cars higher in the air. Generates one additional mine each lap.

Shark - a high speed car that can outrun almost anything in a straight line.

Each car is equipped with a device that can be used to alter the state of different environment elements. You can open and close electronic gates, lift bridges and control teleport switches. Hacking gives you power to control the whole race. But remember, every pilot can do this, so be smart about how you use it!

Feel free to contact us! We encourage anyone that likes the game to leave a comment here, on our facebook page or email us!
So if you would like to post anything about TurboLink, we have this presskit to make your life easier:

Thanks for voting and helping TurboLink on it's quest to become the 2021 Indie of the Year. You are now in with a chance to score some free games. Help this game secure more votes by embedding the widget (or link) we have included below on your favorite sites.

TURBOLINK GREENLIT BY YOU. THANK YOU!

You all are the best! Without you, we would not have done it!
We appreciate every vote, yes or no, all without exception. 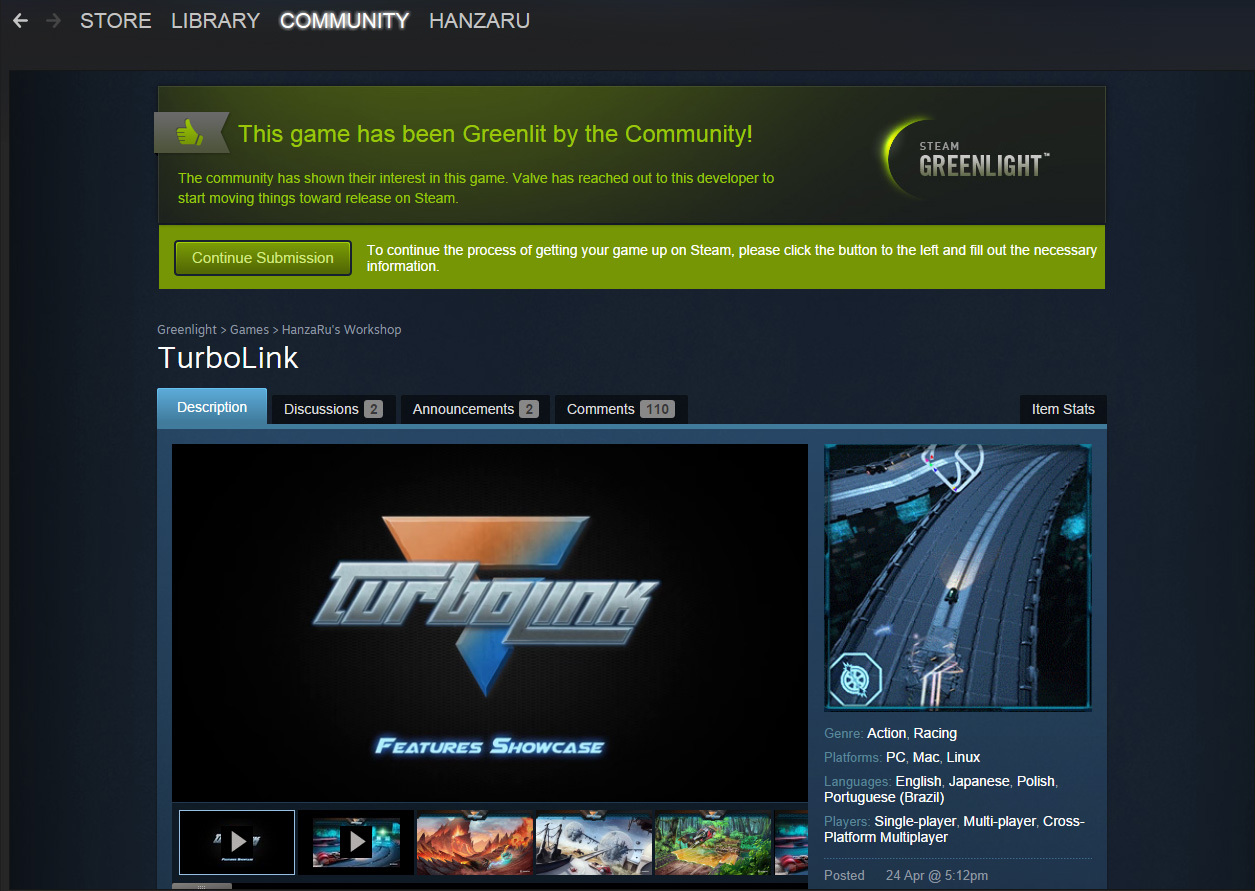 But the battle is not over yet: Final week of our Feedback Phase! Sign up for Collective Square-Enix and give your vote here!
Then, we can go to Kickstarter with maximum strength of the community!I

We will transform your trust in the best "Turbolink" we can do.

Vote up on TurboLink's Greenlight!

Launching today the SteamGreenlight campaign of Turbolink, Vote up and help us to distribute Turbolink through Steam!

[EDIT] the mirror is slow? download directly from our site! Open the description of this item! Lauching today Demo Version of Turbolink. Download, test...

[EDIT] the mirror is slow? download directly from our site! Open the description for links! Lauching today Demo Version of Turbolink - Linux. Download...

[EDIT] the mirror is slow? download directly from our site! Open the description for links! Lauching today Demo Version of Turbolink - MacOSX. Download...